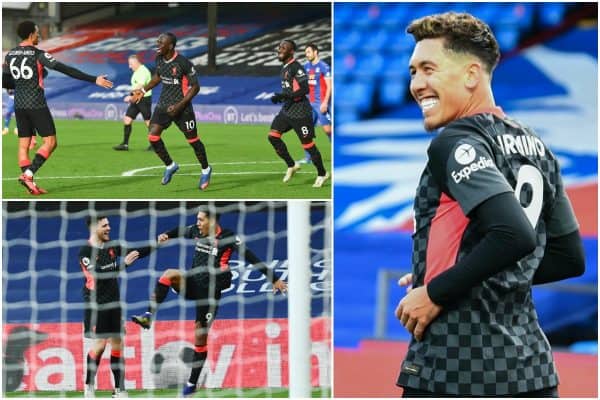 Liverpool were back to their barnstorming best in a ruthless display at Selhurst Park, pummeling Crystal Palace 7-0 to sit, at least temporarily, six points clear at the Premier League summit.

Trips to meet Crystal Palace have always been tainted by that day back in 2014 despite the fact Liverpool had not lost in the last six meetings home and away.

It was an occasion where capitalising on the midweek victory was crucial, where a third successive Christmas at the top was on the line.

The occasion saw Liverpool’s past and present meet, with Roy Hodgson at the helm for Crystal Palace – but after just three minutes, there was only going to be one winner.

Takumi Minamino found the net first to get the party started after feinting a shot before rifling the ball into the corner, his first in the Premier League.

And his teammates rightly swarmed him after the momentous moment.

It was just the start, but Reds had to wait 32 minutes for the next – which came off the boot of Sadio Mane, who no doubt lingers in the nightmares of Palace defenders.

Incredibly, it was the seventh successive goal in seven games against the Eagles.

Not to be outdone, Roberto Firmino backed up his midweek winner with two eye-catching goals in a Man of the Match display, with the Brazilian back to his brilliant best.

The skipper was grateful for the awareness of Trent Alexander-Arnold after kickstarting the scoring in the second half.

The outside of the box finish was exquisite and it heralded his first of the campaign after another performance worthy of adulation.

Mohamed Salah would finish the romp despite starting from the bench, needing only three minutes to hit Palace twice.

The first was instinctual, the second simply stunning as he took his season tally to 16 across all competitions.

Within all of that, however, was the welcome sight of Alex Oxlade-Chamberlain making his return to the pitch for the first time since the final game of the 2019/20 season.

Overall, it was a performance to behold and one which saw Klopp’s men add more records to their name in addition to establishing a bigger buffer at the top of the table.

It what was both the club’s biggest ever Premier League win but also their biggest away win in the top-flight in 106 years.

It marks another early Christmas present, with the Reds having now been positioned at the top of the tree on Christmas Day for three years in a row.

Liverpool can now sit back and watch results unfold elsewhere before getting back to business in front of 2,000 Reds against West Brom at Anfield on December 27.