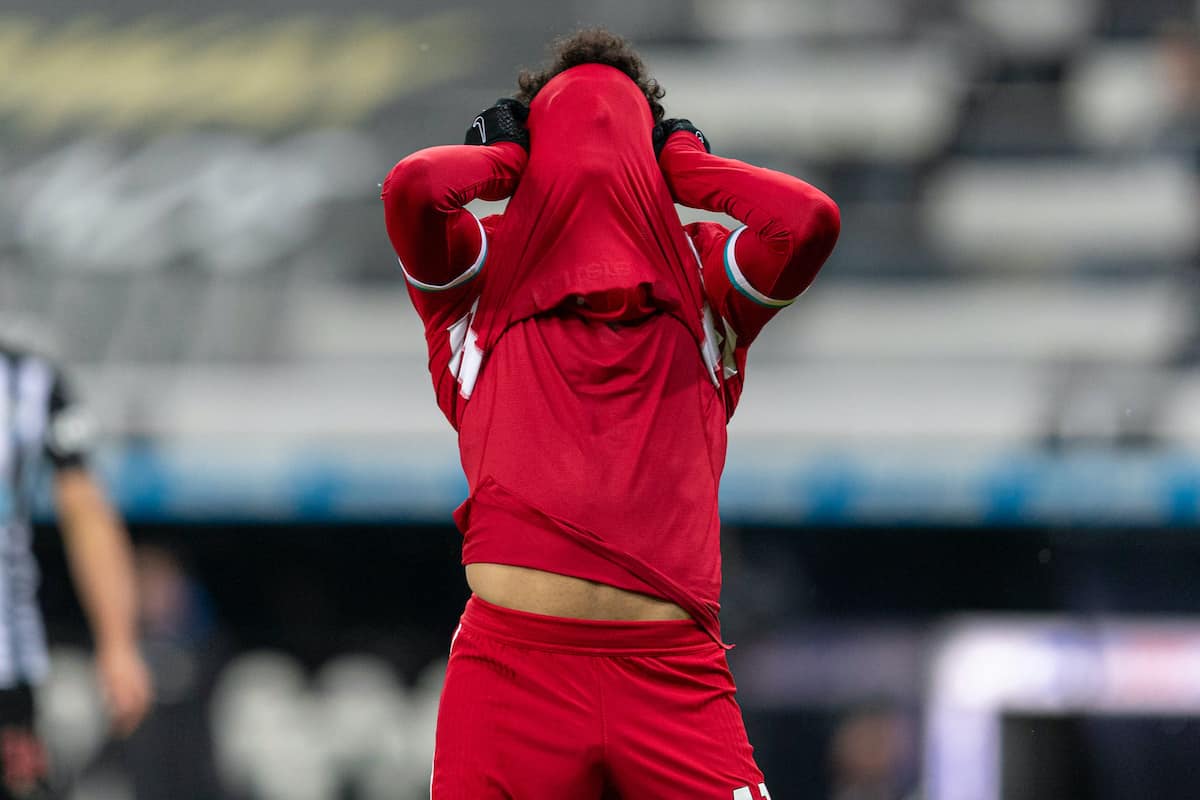 Liverpool could only draw 0-0 at Newcastle on Wednesday evening, as they dropped further points in the Premier League title race.

Jurgen Klopp‘s men knew victory would send them five points clear at the top of the table, as they made the trip to St James’ Park.

It was to be another curiously flat showing from the Reds, however, as they never got going against the Magpies.

Mohamed Salah missed an excellent chance in either half, and some desperate Newcastle defending was also on show, but Liverpool couldn’t find a way through.

In the end, the champions had to settle for a draw, meaning they are now only three points ahead of Man United, who have a game in hand.

There was lots of frustration after the final whistle…

Another massively frustrating game. Totally different to the West Brom match insomuch as we actually created chances tonight, but didn't do enough. We look mortal this season. Points dropped. An annoying end to the year.

Dropping points to the teams currently in 15th, 17th, 18th and 19th in the last month isn't great.

All games that Liverpool would have 'found a way' to win last season. This season is awful to watch.

Still top, but more points dropped on the road to a poor side. Thiago’s cameo and Robbo being Robbo aside, that was abject. Felt like a January/February game from Klopp’s first seasons. Tired, cumbersome, and muddled ideas. Bleh.

We didn’t play that well and yet we created four absolutely brilliant chances, sadly we wasted them all.

“Very unlucky tonight. Had chances in the second half but it would not go in.”

– Mascot on the forums.

Awful performance. Front 3 yet again take the night off. Shite.

How have we not won that?! So many chances. Terrible finishing

The midfield was horribly one-dimensional…

Henderson’s game summed up there. Heavy touch to give the ball sea in the final Third. 1 win in 4!

“Hendo and Milner together against defending team. Nice one.”

all on klopp btw, started that useless af midfield which didnt do anything the whole bar useless passes, 35 year old milner, curtis jones and hendo, the creativity wow ????

“Jones needs a spell on the bench.”

Midfield killed us again tonight, like vs West Brom, so slow in possession, can’t play any combination of the likes of Milner Henderson Gini and Jones in a 3 vs a bottom 6 side

Thiago was promising when he came on…

Frustrating doesn’t even cover it. You know when our passing isn’t up to standard it’s going to be a tough slog. Should not be dropping points against these teams.
Thiago a different gravy though. A joy to watch.

LFC had several big chances, but often scrappy ones. So poor tonight in so many areas of our game. I expected a big reaction to West Brom, and there wasn’t really much of one. Too one-paced until Thiago came on. He made a big difference in a short time.

If I see a starting eleven without Thiago’s name in it, I’m going to hurt someone.

Has to start every single Premier League & Champions League game until the end of the season.

“Only positive out of that game was thiago coming on.”

The injection of class provided by Thiago has been ridiculous here.

There aren't a lot of positives from tonight's game. But this man is one. HAS to start the next game. pic.twitter.com/GyghqWy8sC

“Thiago done more in 3 mins than the starting midfield three could manage in 70.”

The Reds are still top at the end of the year, though…

Liverpool end 2020 as we started it – top of the league and better than all the rest. Long may it continue!

Not good enough again against a team we should be beating. We had the chances but were not clinical enough. Disappointing from our standards, but we end the year top of the league, so roll on 2021! ? #LFC pic.twitter.com/CLUysK09uW

The quality this season has been poor from all teams tbf, but we still end the year top of the league and we definitely still champions. Soooooo…… pic.twitter.com/IYJ2qAnoWT

“All is not lost. We’re still top and hope this is our minor blimp for the season.”

– jabu on the forums.

But still… It's nice to have problems at the top of the league.