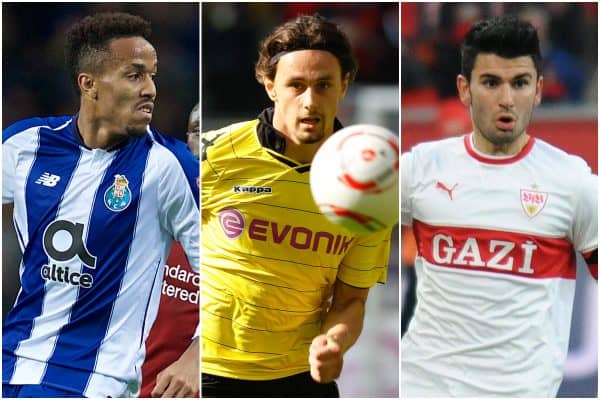 Liverpool are facing a race against time to identify and sign a new centre-back before the end of the transfer window, but there are a number of potential options.

If it wasn’t already clear to Jurgen Klopp and the club’s hierarchy, the need to bolster the Reds’ defence before 11pm on February 1 was stressed further this week.

Fabinho and Joel Matip have now joined Virgil van Dijk and Joe Gomez on the injury list, and while the extent of layoff for Liverpool’s No. 3 is unclear, Matip appears to be out for the long term.

If Fabinho is able to recover, that would see him and Jordan Henderson as the new first-choice pairing, with youngsters Nat Phillips, Rhys Williams and possibly Sepp van den Berg and Billy Koumetio in reserve.

Speaking after Thursday’s 3-1 win over Tottenham, Klopp admitted the need to bring in another centre-back if possible, but added: “If you have a centre-half available for a reasonable price, and the quality we need, you can send a message and I will go.”

The point is that, particularly given how public Liverpool’s situation is, the pursuit of the “right player” – even on a short-term deal – is decidedly difficult.

However, there are a number of possible options available to the Reds, including a host of centre-backs currently available on a free transfer.

Perhaps the most attractive candidate is Real Madrid’s Eder Militao, who has found his opportunities limited at the Bernabeu since joining from Porto in 2019, and it has been claimed he could be available on a six-month loan with an option to buy.

Another in a similar situation may be Samuel Umtiti at Barcelona, with the Frenchman finding himself overlooked by Ronald Koeman until an injury crisis of his own, and will likely do so again when Gerard Pique returns to fitness.

In terms of permanent targets, Lille’s Sven Botman is the most eye-catching, with the 21-year-old strongly linked with Liverpool earlier in the window and possibly available due to the fragile financial climate in Ligue 1.

On the free agent market, Neven Subotic is the name on many supporters’ lips, following his decision to terminate his contract with Turkish side Denizlispor earlier this month.

Subotic has already worked with Klopp at Mainz and Dortmund, and is, in fact, the most-used player throughout the now-Liverpool manager’s career, with 281 appearances.

Other veterans available include Reto Ziegler, once on the books at Spurs but now 35, Lamine Sane, a looming 6’5″ Senegal international who has played for Bordeaux and Werder Bremen, and 14-cap former Germany defender Serdar Tasci.

It is unlikely any of the free agents would be an ‘ideal’ solution for Liverpool, but it can certainly be argued that it has got to the point wherein which Klopp and the club’s recruitment staff should settle.

Bringing in an experienced centre-back on a six-month contract would provide short-term relief at the back, allowing the Reds to work on a long-term signing in the summer and await the return of Van Dijk.