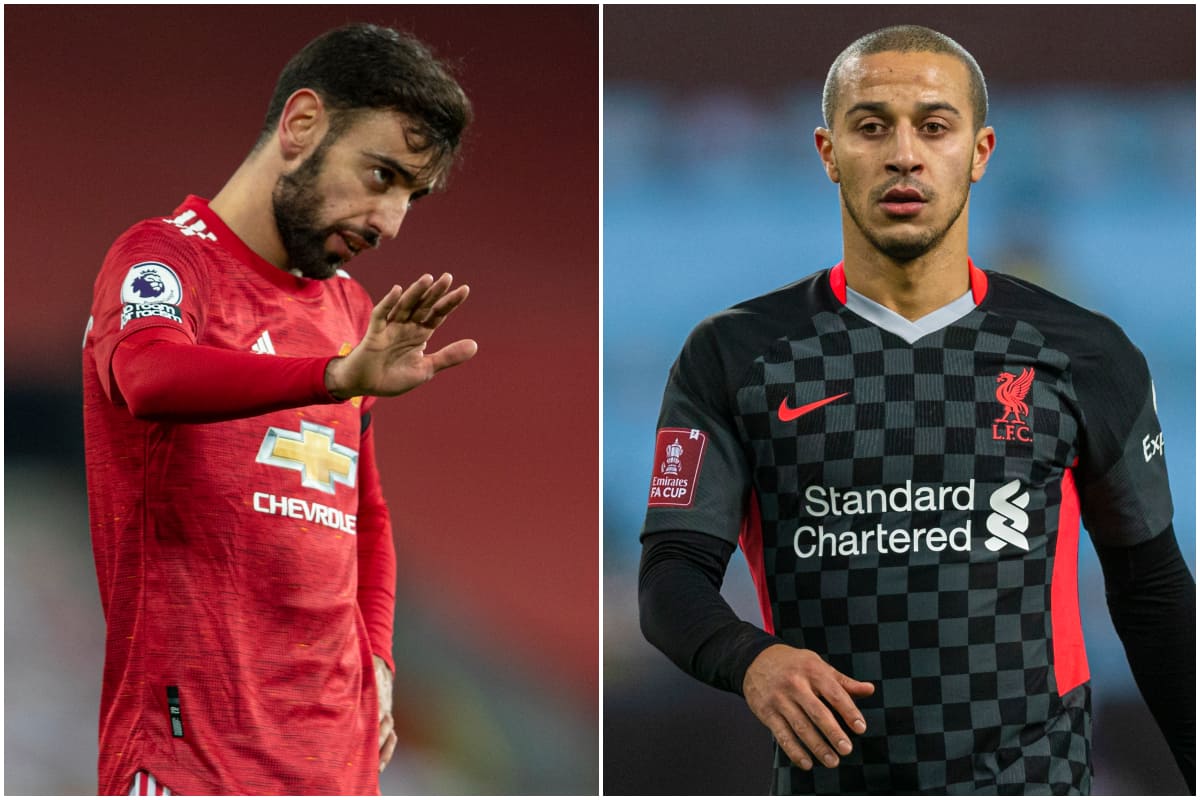 Liverpool’s visit of Man United on Sunday could be pivotal in the title race, but do their fans believe they can really go all the way?

Some games between these two great rivals don’t always match the hype, but this one is huge.

United go into the game three points clear of Liverpool at the top of the Premier League, having found an impressive run of form under Ole Gunnar Solskjaer.

Jurgen Klopp‘s champions will be looking to bounce back from three league games without a win, hopefully using last week’s FA Cup victory over Aston Villa as a momentum-booster.

Ahead of the game, we spoke to the Morning Star’s sports editor Kadeem Simmonds (@KadeemSimmonds) to get his thoughts on the title race, Liverpool’s injuries and Sunday’s meeting.

How happy are you with Man United’s first half of the season? 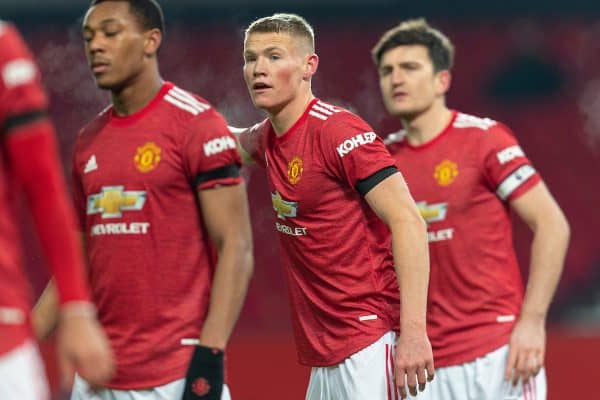 It’s hard not to be delighted and over the moon with 95 percent of what we’ve seen so far.

There have been some down moments, though, such as the Tottenham defeat, the League Cup semi-final loss to Man City and crashing out of the Champions League.

But we sit top of the Premier League, which is something even the most positive United fan would have had a hard time believing prior to the start of the season.

The football still isn’t dominant and there’s still too much reliance on certain players to produce individual moments of magic, but wins lead to points.

As it stands, United have more than any team in the league – long may it last.

Is Solskjaer the man to take the team forward and bring back the glory days? 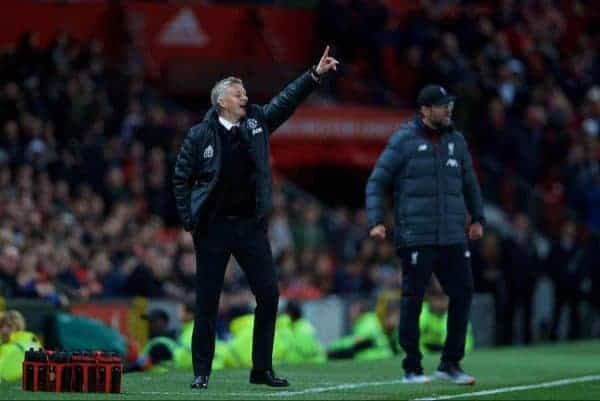 Based on what we’ve seen so far this season, the answer is probably yes. But if I’m being honest, he’s not the long-term answer.

Many fans wanted Mauricio Pochettino to take over, believing that Ole had taken the team as far as he could. When we went out of the Champions League, that seemed as good a time as any to make the change.

But United under the Norwegian have this knack of producing their best when their backs are against the wall and somehow they find themselves at the top.

Whether he can maintain it with this team is doubtful, in my opinion. United aren’t beating teams into submission like the old title-winning teams would. They are grinding out results and taking each game at a time.

This is great experience for a fairly young team, though, with the large majority having not been in this position before with this club.

Ole can try and dig into his ‘this is what Fergie did’ box, but we all know that the former United boss was a generational manager whose methods can’t be replicated, no matter how hard the current manager refers to them in press conferences.

Losing another semi-final hurt and you can tell that the players see that as a failure, as opposed to a sign of progression.

I sense that the board are happy with where things are going, whereas some fans see this as the best it will get under Ole.

They believe a more experienced coach – one who knows how to play the brand of football United fans expect while lifting trophies – is needed for United to take that final step.

Who have been United’s three best players so far this season?

Bruno, Bruno and Bruno. Nobody really comes close to him at the moment.

Rival fans make jokes that United only win via his penalties, but it shows how vital he has been to the team this season.

Other players have flirted with being good-to-great so far, with Marcus Rashford having his moments and Paul Pogba playing well at the moment.

Fred and Scott McTominay have played very well when asked to come in and do a job, but nobody has really played at a high level consistently, outside of Fernandes.

Switching our attention to the title race, who do you see as the team to beat? 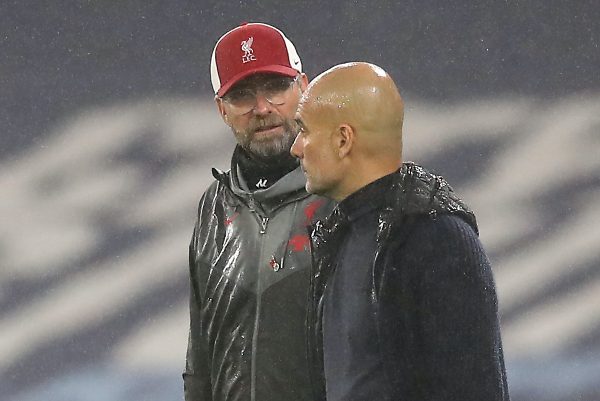 I wish I could say it’s United, but I don’t like the noise coming from our neighbours, City.

They are quietly stringing dominant victories together, and while everyone is talking about United being in the title race, the blue side of Manchester are gearing up for their own challenge.

They are in the better form at the moment – it showed in the semi-final – and while they are not top, chances are they will be sooner rather than later.

We have that ‘pretender’ smell to us at the moment, enjoying our time as leaders without really deserving it.

How much do you think injuries have hampered Liverpool’s campaign?

It’s hard to argue that they haven’t hampered Liverpool’s season. The main one is Virgil van Dijk being out for most of the season.

His arrival, it could be argued, turned the Reds into the team they are today and not having him starting week in, week out is a huge miss.

Factor in Alisson has been hurt, as has most of the Liverpool defence at times, and there’s been no rhythm for the team to get into.

That lack of being settled has seen a team fail to find form, and when players have come back, such as Trent Alexander-Arnold, they look a bit off the pace.

That’s not to say certain individuals aren’t playing well, but the standard has been set, and if everyone isn’t firing on all cylinders, the results suffer.

Looking ahead to Sunday, where do you see the key battles taking place? 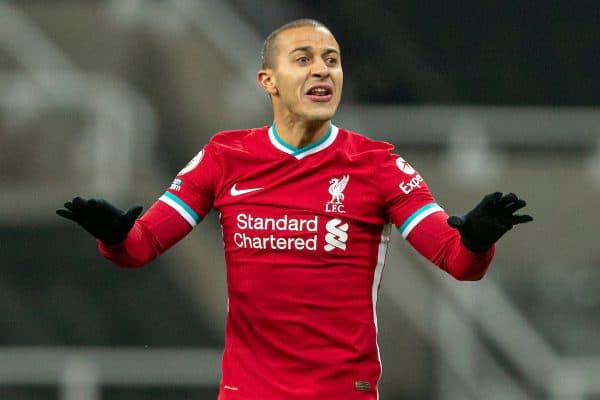 I feel like I always say this, but it has to be the midfield battle.

Ole played Pogba and Nemanja Matic against Burnley, which leads many United fans to believe he will drop the pair and play Fred and McTominay against you.

Those two have been tasked to drive the team forward in a lot of big games this season, but also get stuck in when possession breaks down.

Pogba is in good form at the moment, but it wouldn’t surprise anyone if he makes way for the Scot and the Brazilian.

If Fred and McTominay can disrupt your midfield and stop you from dominating possession, it may allow United to slow it down and play it at their pace.

That being said, Ole loves to sit back and hit teams on the counter-attack in these games, so having Fred and McTominay shielding the defence would allow Bruno, Rashford and Anthony Martial even more freedom to get at a defence missing key players.

What are your favourite, and most hated, Anfield memories? 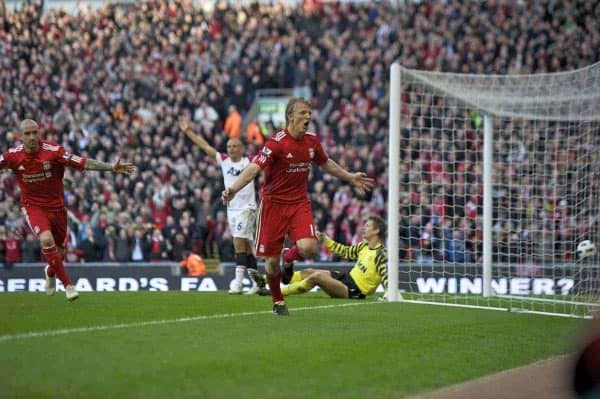 My favourite recent memory, and I stress recent, is the 2-1 victory in which Juan Mata scored a brace and Ander Herrera was up to his best wind-up merchant performance, which ultimately saw Steven Gerrard sent off in what was his last league appearance against us.

The worst that springs to mind was Dirt Kuyt’s hat-trick against us in 2011. Not a single goal was scored from further than two yards out – imagine if xG was a thing then!

Finally, hit us with your prediction this weekend…

Our performance and results against Chelsea and City in the league tell me that Ole will want to come out of this game without a defeat.

We won’t be on the front foot – it rarely feels like we are against the fellow ‘big six’ – and the onus will be on keeping it tight, disrupting your play and taking our chances when we get them.

I would love to see us take it to you, using our momentum to our advantage, but that confidence isn’t quite there yet.