The key to a continued development pathway and success at any football club means the “best signing” every summer should arrive from the academy, in the eyes of Pepijn Lijnders.

The Reds lay claim to a long list of talented alumni throughout their history, from Steven Gerrard and Jamie Carragher, two bonafide legends, to current-day stars in Trent Alexander-Arnold and Curtis Jones.

You can add the likes of Neco Williams, Rhys Williams and Caoimhin Kelleher to the list of ones to watch from the academy as the conveyor belt of talent shows no signs of stopping.

A successful academy is a key cog in the machine of any successful team and for Lijnders, who has spent the majority of his career moulding the futures of young players, it acts as a lucrative well of resources which should be readily turned to.

Speaking to The Big Interview with Graham Hunter, Lijnders shared his view on how every season should be upheld by a ‘signing’ from the academy.

And he uses the example of Trent’s breakthrough into the team as a prime example, with the right-back’s inclusion not just impacting his career but also those looking to emulate him.

“I think the advantage of bringing your own players up is that you create a father-son relationship with the club,” Lijnders said.

“They always give a little bit more, they never let you down in my opinion. The best back-up, the best investment you can do and the best signing each season should be the academy. 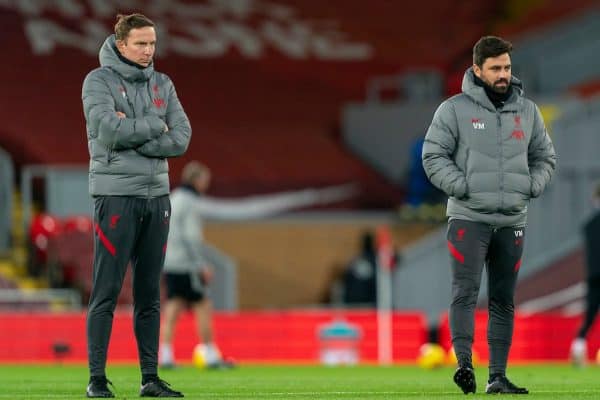 “What we mainly did was we created space in our squad so, for example, instead of going for a second right-back, we put Trent there in that time because he was already in the talent group.

“The most important thing I feel as well, which we did at Porto and PSV, that young players need is hope and trust from the manager, so from Jurgen.

“The moment there’s a relationship between Jurgen and Trent, the moment there has to be a decision made to bring a young player up or signing somebody else it’s really important that this relationship is there and that’s why we created the talent group.

“With hope, the moment Trent comes through he inspires directly a hundred other players in the academy because they see it is possible.

“And that’s one of the biggest trends of all clubs who bring players through, like Ajax etc.”

It’s an important point Lijnders makes, with it clear that one promotion into the first team has the power to inspire the next in line having proved that it is possible.

It also is a nod to the desire to hand the likes of Neco Williams, Rhys Williams and Phillips game time before dipping into the market, the former of whom is now Trent’s deputy.

Lijnders previously oversaw the transition from Liverpool’s academy to the first-team, a role now occupied by Vitor Matos, and the move to Kirkby would have come as a major boost to strengthening the relationship throughout the different age groups.

Jones, who now has 32 senior games to his name, certainly takes the gong of the academy signing of 2020, but who will follow in his footsteps in 2021?