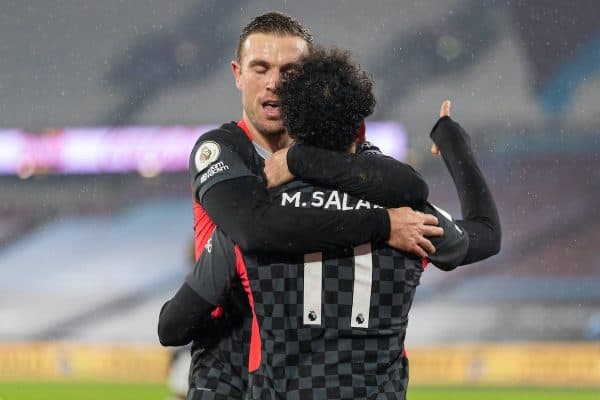 Mohamed Salah has matched a host of Liverpool’s legendary strikers including Gordon Hodgson, Roger Hunt and Ian Rush in hitting the 20-goal mark again this season.

After having not scored in six games in the Premier League, Salah hit a brilliant brace as the Reds surged to a 3-1 win away to West Ham on Sunday.

It took his league tally for the season to 15, moving him clear of the likes of Harry Kane, Son Heung-min and Jamie Vardy in the race for the Golden Boot, and in all competitions took him to 21.

This is the fourth consecutive campaign that Salah has scored at least 20 goals for Liverpool, and this has secured him another piece of history.

Salah is just the fifth player to break the 20-goal mark for Liverpool in four or more successive seasons, with only the club’s best-ever forwards having done so before.

According to club statistician Ged Rea, the Egyptian joins Gordon Hodgson, Billy Liddell, Roger Hunt and Ian Rush in doing so, with Rush the last to produce the feat for the Reds, 34 years ago.

It highlights how remarkable a player the Reds currently have on their books, and this is despite Salah still not being regarded as a truly top-level talent in some quarters.

He is now 14th among Liverpool’s all-time leading goalscorers, and only 16 goals off moving ahead of Sam Raybould into the top 10, having struck 115 times in 182 appearances.

In the Premier League, only Michael Owen (118), Steven Gerrard (120) and Robbie Fowler (128) have scored more than Salah’s 88, with there being every chance he becomes the club’s leading goalscorer in the history of the top flight.