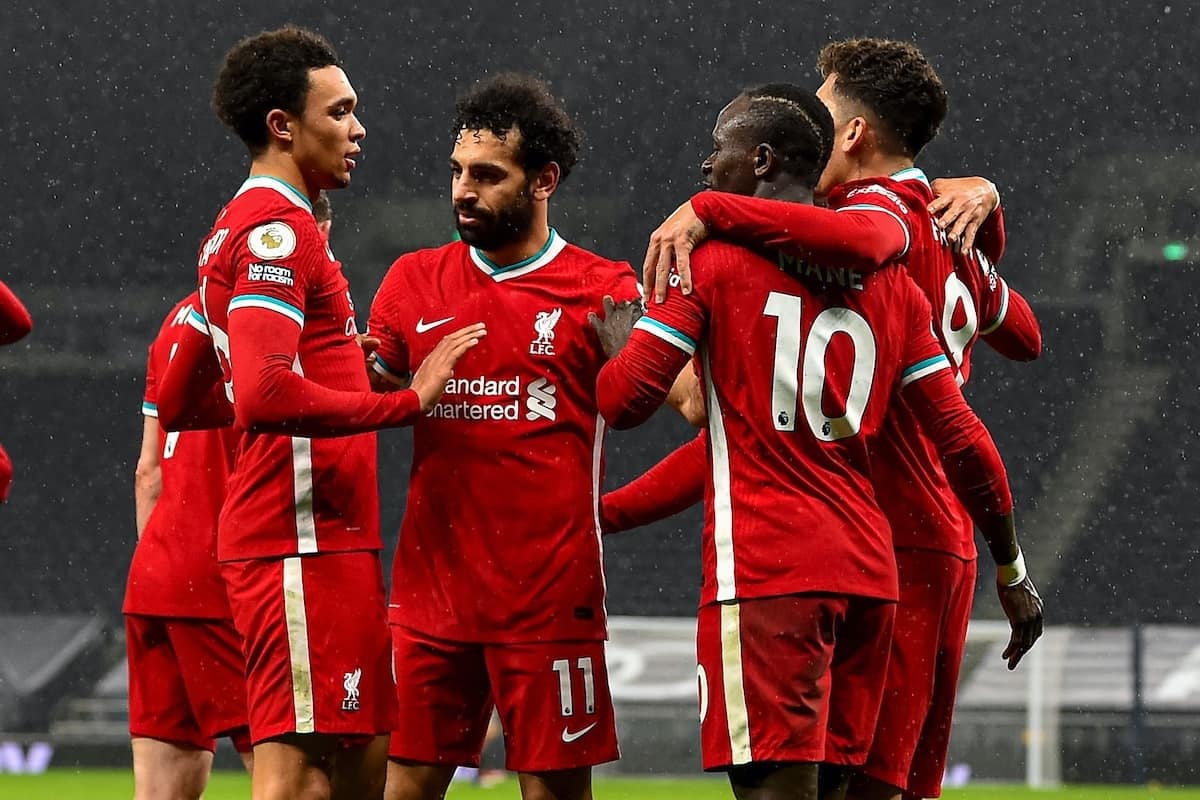 Liverpool were back on form on Thursday night as they powered to a 3-1 win away to Tottenham, moving back to fourth in the Premier League after a barren five-game run.

The Reds arrived in north London with the form guide going against them, and were dogged by yet another defensive injury as Fabinho‘s absence led to Jordan Henderson partnering Joel Matip at the back.

With Man United, Chelsea, Leicester and Everton all dropping points in midweek, both sides were eager to start fast, and after Sadio Mane missed a big chance, Heung-min Son had the ball in the back of the net only to be ruled out for a marginal offside.

Jurgen Klopp made a tactical shift in midfield, as Gini Wijnaldum dropped into the No. 6 role, which allowed Thiago to make more of an impact in the final third – though Spurs’ well-drilled defence kept chances at a premium.

Mane was by far the busiest of Liverpool’s attackers, and had a number of opportunities to put it past Hugo Lloris for the opener, but the Senegalese’s touch and finish eluded him.

He was more clinical in a creative sense, however, latching onto Henderson’s brilliant lofted ball, chesting it down and playing it across the six-yard box for Roberto Firmino to tap in the Reds’ first Premier League goal in eight hours.

Both managers made changes at the break, with Jose Mourinho forced to withdraw Harry Kane, and worryingly Klopp was required to bring off Matip, with Nat Phillips taking his place.

Lloris, for all his qualities, is far too often suspect to be considered among the top echelon of goalkeepers, and the Frenchman gifted Liverpool their second within 80 seconds of the restart, palming Mane’s shot out for Trent Alexander-Arnold to hammer home.

Immediately after, though, Spurs had reduced the deficit, and it came via a stunning strike from Pierre-Emile Hojbjerg, who produced a piledriver from outside the box for 2-1.

Mohamed Salah then hammered it past Lloris for what Liverpool believed to be a third, only for a questionable VAR call to overrule it for a handball from Firmino in the buildup – which came after a handball from Eric Dier.

The third came, though, within nine minutes, with Spurs continuing to struggle as Joe Rodon allowed an arrowed Alexander-Arnold cross to run past him for Mane to fire into the roof of the net.

Liverpool controlled things with their two-goal lead in place, and were able to see the game out as a Spurs side once considered among the favourites for the title limped to defeat.