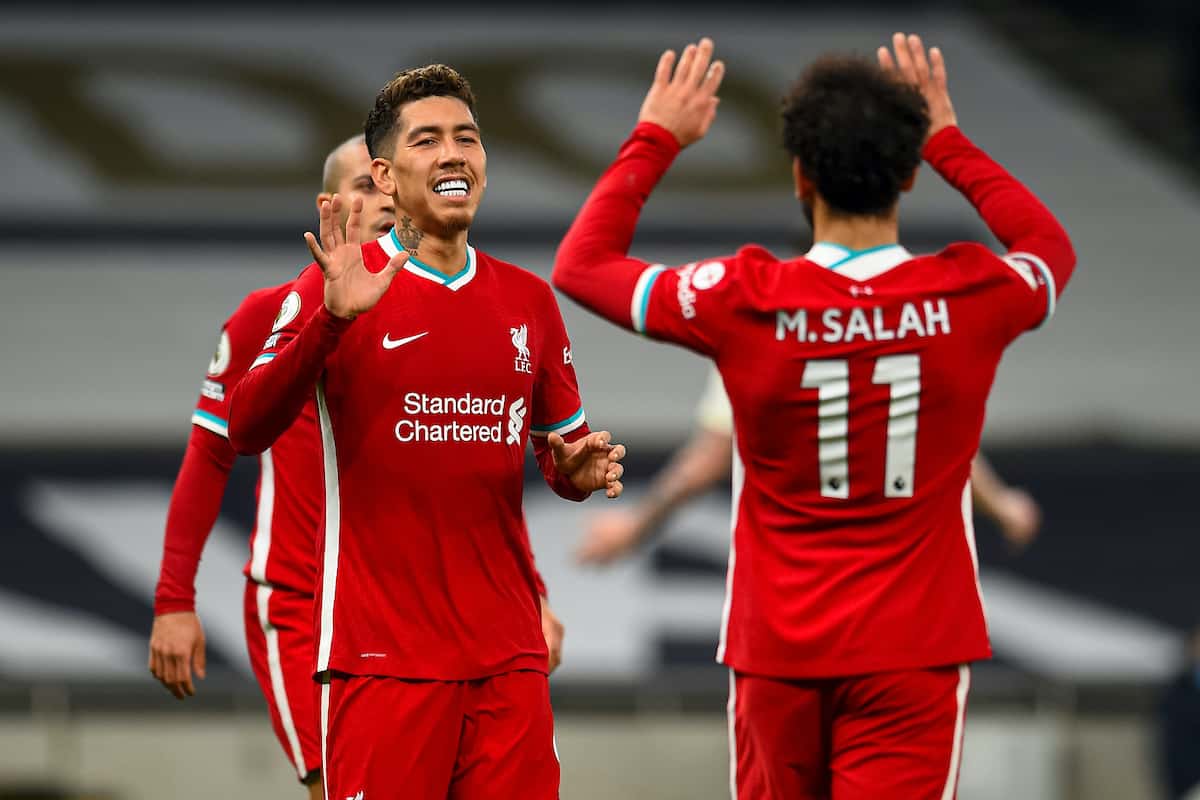 Liverpool finally ended their winless run in the league with a dominant 3-1 win at Tottenham, and fans were rightly delighted to see three points added to the tally.

The Reds started the night in the capital in desperate need of goals and a win and were dealt with a late injury blow to Fabinho for good measure.

A dramatic start saw Sadio Mane miss a glorious chance before Heung-min Son had his goal ruled offside by VAR, where the half then saw Liverpool dominate possession.

And after nearly 500 league minutes without a goal, Roberto Firmino would end the drought from close range to hand Jurgen Klopp‘s side the lead on the cusp of the interval.

The second started how the first finished with Trent adding a second, but the buffer was short-lived as Pierre-Emile Hojbjerg pegged one back with a stunning long-range strike.

VAR would once again come into play to deny Mo Salah for a questionable handball decision in the build-up, only for Mane to add another with a thumping finish.

The league goal barren run ending was a relief…

I can’t believe my eyes… a Liverpool Premier League goal?!!! Bobby Firmino does it again against Tottenham ?? #TOTLIV #PL

Not sure I've seen a goal reaction like that from kloppo before. Looked like pure RELIEF #lfc

We… We… We did… We did a goal… pic.twitter.com/fRYHtDTyT4

So much better from everyone. That goal feels fucking good.

Take a bow Roberto Firmino. He's been a different player in the last two games, will do his confidence the world of good. #LFC

And the team performance was rightly lauded…

This is a much, much-needed performance from Trent Alexander-Arnold. He’s been in the doldrums, he hasn’t been quite at it but this has been a significant improvement. He’s mirrored the team.

About 600 crosses the past four or five games which have been utterly, woefully abject.

One goal and then he pings that perfect one over!

Confidence and rhythm = everything.

Great to have the real Trent back. It’s been a while.

James milner is an actual beaaaast! What a top guy

Gini has been unbelievable tonight

Milner. That is all.

Firmino absolutely class tonight. Massive shame the Salah goal didn’t stand just because of his hold up play in the build-up.

That was very, very good.

But Matip’s half-time withdrawal was cause for concern…

Sums up Joel Matip, that. A brilliant half, before being forced off with an injury. A very good defender, but just so unreliable.

Matip fails to complete consecutive 90 minutes in the league yet again. He's only done so ONCE this season (and that was when there was a fortnight between the two games).

Matip is a fantastic defender. Just wish she wasn’t so injury prone ?

Phillips on? Matip off. Fuck me. Absolute shambles not getting a centreback.

There was no surprise that the refs were in the spotlight…

Such.a bullshit call. Firmino being wrestled FFS.
As a wise man once said: the problem with referees is that they know the rules but they don't know the game.

Dier first handles, due to his arm being pinned across Firmino’s chest. This in turn makes the ball deflect off Firmino’s forearm, as a direct consequence. Verdict: Liverpool hand-ball.

The reality is while that is handball, it's a foul by Dier before/during it so as there's no advantage in giving #LFC the free-kick, the goal should stand

And the importance of the victory was not lost on Reds…

Proper win, against the most Mourinho of teams. Spurs pedestrian and lifeless even with 10 to go. Trent and Firmino sharp, both had big points to prove. Milner threw himself everywhere. Huge points and, hopefully, momentum. #LFCdigest

BIG win that for Liverpool. Bobby Firmino is back in form too. When he plays well, Liverpool play well. It’s a rule. Oh and James Milner is Benjamin Button. #LFC

We all needed this. Great victory.

Just a phenomenal result and performance given the opponent and the pressure #LFC were under coming into tonight. You could tell from Jurgen Klopp’s reaction to the goals how much this meant to him. His squad might be short on centre-backs but there’s no lack of character.

“Well done lads, the best way to answer all the criticism!”

What a great win that was. Feels so fucking good to win in the League again – a great performance too.

Dominated the game – Spurs didn't even create much. Superb stuff.

More of this please Reds. pic.twitter.com/cRJPCxWcnU

Overwhelming sense of relief. Great win and 3 points but the confidentiality coming back, after a torrid run, is the most pleasing. Great 2nd half from Nat but doesn't disguise the bleeding obvious need for another centre back. Up the Reds

What a performance from Liverpool. To a man, fantastic throughout. A reminder to some fans who seem to have written them off of late. Get in there!! #TOTLIV