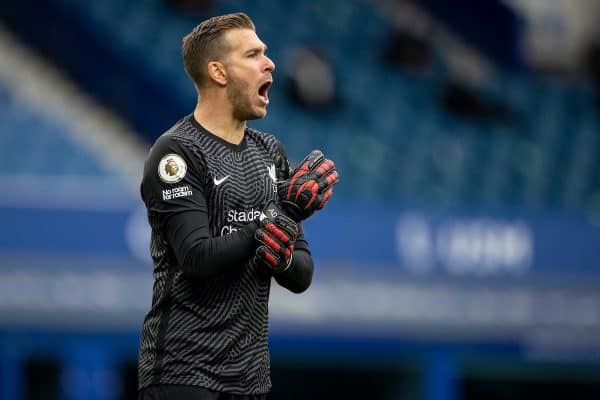 Jurgen Klopp has named Nat Phillips as partner to Ozan Kabak as Liverpool look for their first win in five Premier League games, this time away to Sheffield United.

The Reds have lost each of their last four outings in the league, with Brighton, Man City, Leicester and Everton all taking the three points at the expense of the champions.

It is a miserable situation for Klopp’s side, compounded by their growing injury list as Jordan Henderson looks set to miss the majority, if not all, of the remainder of the campaign.

Tonight’s trip to Bramall Lane enforces yet another new centre-back pairing from the start, while between the sticks, Adrian takes the place of the bereaved Alisson.

Trent Alexander-Arnold and Andy Robertson flank Nat Phillips and Ozan Kabak in defence, with Gini Wijnaldum given duties as No. 6.

Alongside Wijnaldum in midfield are Thiago and Curtis Jones, while Mohamed Salah, Sadio Mane and Roberto Firmino start up front.

Despite the expectation that Diogo Jota would make the bench after two-and-a-half months out, the Portuguese is not risked due to illness.

Academy goalkeepers Jakub Ojrzynski and Liam Hughes are among the substitutes, with James Milner back from injury but Fabinho still out.