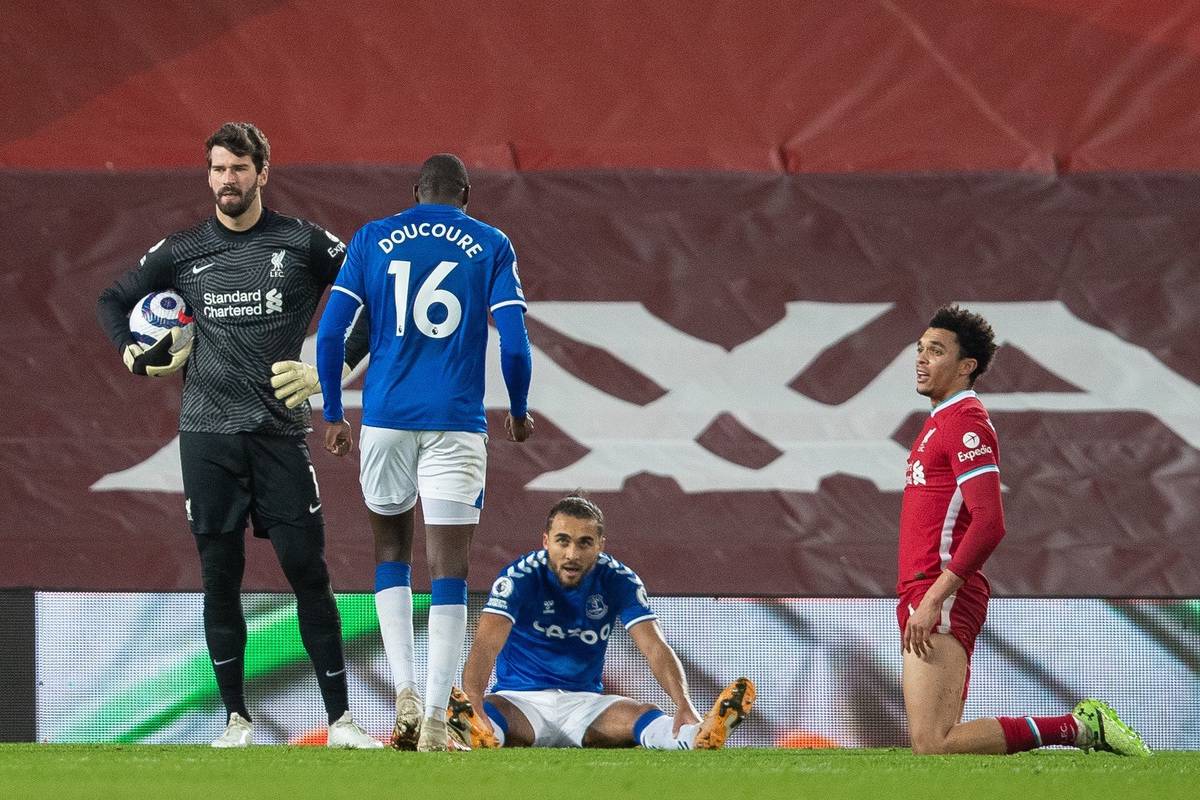 Liverpool’s lack of impetus and the referee’s lack of sense ensured a first Merseyside derby loss since 2010, with Everton securing a 2-0 win to heap misery at Anfield.

Given the focus on the events of October’s derby, and the need to strike back with a performance building on that seen in midweek, it was frustrating to see Liverpool concede within the first three minutes.

It came after a woeful start from Ozan Kabak on a windy Anfield debut, with the Turk having already headed a lost cause out for a corner before seeing the ball played comfortably through as Richarlison surged past him to finish.

Things went from bad to worse on the half-hour mark as Jordan Henderson was forced off with a hamstring injury, with Liverpool’s medical staff taking the strange decision to allow the captain to briefly play on to test, and possibly aggravate, the issue.

The first half was not without merit, of course, though there were few genuine positives, with Alisson‘s point-blank save to deny Seamus Coleman’s diving header perhaps the standout moment.

Everton‘s game plan after taking the lead was clear, with foul after foul committed in the middle of the park, and Andre Gomes was arguably fortunate to avoid a second booking before the half-time whistle.

Jurgen Klopp held a heated portion of his half-time address out on the pitch, and it seemed to inject some urgency in his side, at least for a period, as Liverpool came out of the blocks firing.

Sadio Mane was the biggest threat, with two headers going close to levelling the score – the first saved, the second over the bar at a stretch – before a stunning tackle from Michael Keane denied him a clear opening.

Both managers rolled the dice on the hour, with Carlo Ancelotti sending on Dominic Calvert-Lewin and Klopp, recognising the need for change, replacing Curtis Jones with Xherdan Shaqiri as he shifted to a 4-2-2-2 setup.

Everton began to shut up shop again, however, with Jordan Pickford coming out to smother Mohamed Salah as he opened his body up in the six-yard box.

Then referee Chris Kavanagh contrived to gift Everton a penalty as Calvert-Lewin stumbled into Trent Alexander-Arnold, with Gylfi Sigurdsson stepping up to clinch a first Merseyside derby win in 11 years.

The first time Liverpool have lost four consecutive top-flight home games since 1923, and Everton‘s first win at Anfield since 1999.