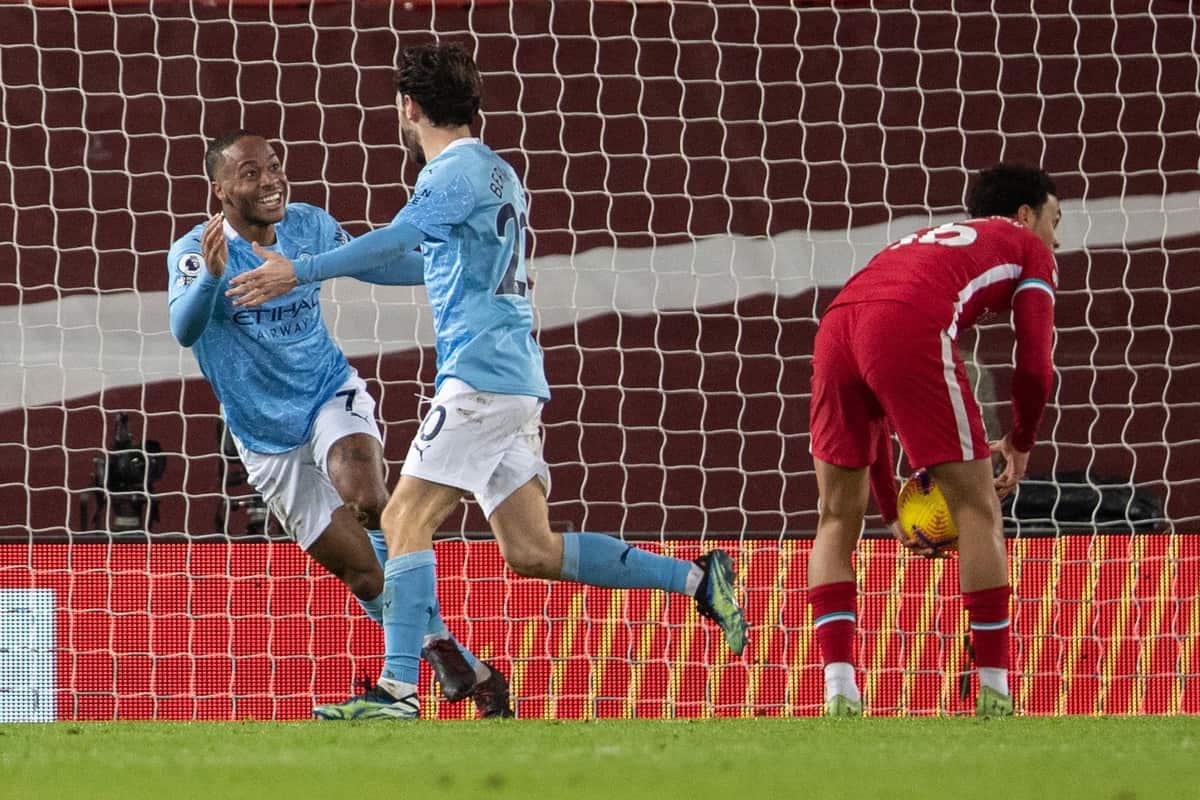 A pair of uncharacteristic but unacceptable errors from Alisson gave Man City a big boost in the Premier League title race, as Liverpool lost 4-1 at Anfield.

Perhaps typically, then, the game began with a tentative pace, with both City and Liverpool reluctant to pull the trigger, and the Reds in particular slowing play down too often.

Curtis Jones, given a big opportunity in replacing James Milner in midfield, was perhaps most guilty of this early on, with one instance seeing him drive forward to pick up a loose ball only to hesitate with Mohamed Salah through for the pass.

The first real chance of the game came in the 24th minute, with Jordan Henderson pinning Oleksandr Zinchenko down with a long ball, allowing Trent Alexander-Arnold to pick it up and supply the cross which Sadio Mane could only head over.

Liverpool were the better side for much of the first half, but allowed City a chance to get ahead as Fabinho brought down Raheem Sterling in the box, only for Ilkay Gundogan to blaze his spot-kick over the bar.

Gundogan could not be silenced after the break, though, with his goal stemming from some truly sloppy defending from a ball-watching Reds back line, the German finishing after Alisson had initially denied Phil Foden.

Jones was arguably Liverpool’s standout player throughout, and after a speculative shot from range that failed to test Ederson, he went inches wide minutes later after pushing onto Alexander-Arnold’s brilliant crossfield pass.

It was an Alexander-Arnold ball that helped curate the equaliser, with Salah producing a questionable fall under minimal pressure from Ruben Dias and, having won the penalty, firing home for 1-1.

With the wind in Liverpool’s sails, Klopp opted for a double change as Xherdan Shaqiri replaced the anonymous Thiago and James Milner came on for Jones – only for it to halt the Reds’ momentum entirely. 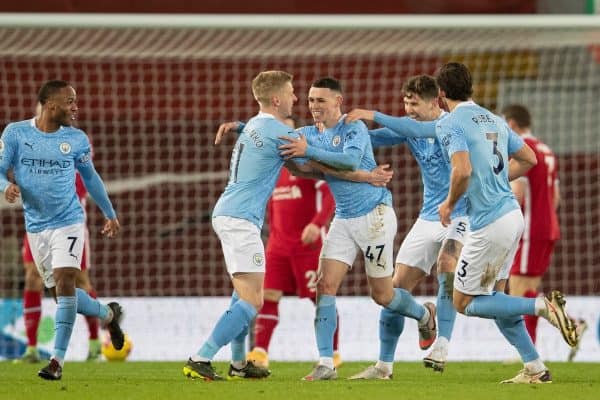 Unfortunately, a parade of awful possession play from Alisson gifted City two more, with a shanked clearance teeing up Gundogan for his second of the game, before an overelaborate attempted pass allowed Bernardo Silva to cross for Sterling’s header.

Foden, outstanding throughout for the visitors, then hammered home a fourth for City – and despite the pace on the shot, Alisson will have been disappointed again as it shaved his fingertips.

Another Anfield loss, then – a third in a row in the league for the first time since 1963 – and, undoubtedly, Liverpool’s title chances are now well and truly over.