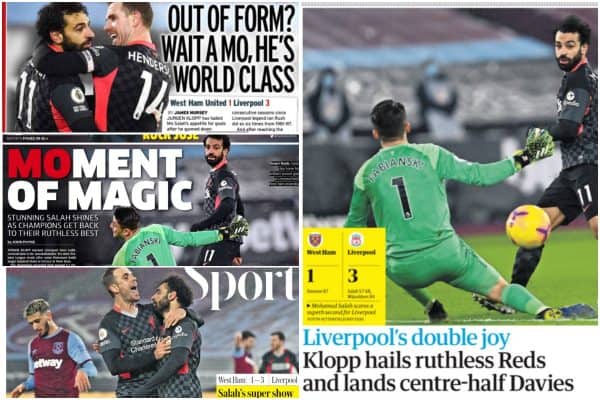 The media declared “Liverpool are back” after the 3-1 at West Ham and were in awe of Mohamed Salah‘s goals and the Reds’ heroic defensive efforts.

The Reds enjoyed another rewarding trip to the capital with a superb victory at London Stadium earning back-to-back away wins.

Three excellent goals – courtesy of a sensational Mohamed Salah brace and Gini Wijnaldum – brought three huge points back to Anfield, with Craig Dawson netting a consolation for the hosts.

It was a brilliant performance from front to back, made even more impressive given how far away from a first choice lineup the Reds were – hats off to every player for a fantastic effort.

Here’s all the key analysis from the media on the victory.

Neil Jones, writing for Goal.com, thought this win was even more impressive than that at Spurs and praised Liverpool for building momentum and consistency:

It’s been a profitable week in the capital for the Premier League champions.

If Thursday’s win over Tottenham was a statement, then they backed it up on Sunday with what was, in many ways, an even more impressive victory, 3-1 away to West Ham.

The Mirror’s John Cross assessed that Liverpool “are well and truly back” and remain a very serious threat in the title race:

A machine which is well and truly back in the title race and you write them off at your peril because they have the ability to slice through teams and put a run together which will frighten Manchester United, City and the rest.

The smiles were back, the confidence has returned and, after two big wins in London in four days after beating Tottenham on Thursday, Liverpool are well and truly back.

The BBC’s Michael Beardmore sees the title race “thinning out” and reckons the Reds will still emerge as the biggest challengers to current leaders Man City:

With Manchester United and Leicester dropping points twice this weekend, Liverpool’s back-to-back victories in London suggests they could emerge as City’s likeliest challengers despite their injury problems.

The Mail’s Martin Samuel explained how we are now seeing the true title contenders seperated from the pretenders, with Liverpool and Man City still the ‘real’ challengers:

Yet, as the season wears on, a very obvious divide is emerging between genuine title contenders and those just in a good moment.

Manchester City and Liverpool look better than the rest; Manchester United are clinging to their coat-tails; the rest are either falling away or too inconsistent.

And Samuel later expressed the thought of every Reds fan, pondering just how this campaign may have shaped up had season-defining injuries not arrived:

Imagine if Liverpool had the full team out for this fixture. This was their domestic cup tie team, and still West Ham could not compete.

The Mirror’s Samuel Meade attributed the Reds’ “winning culture” as key to compensating for the numerous absences and dragging the team to results:

A winning culture though is something no numbers can account for.

Winning at the London Stadium is something Man City have failed to do this season. In the wind and rain though Liverpool put in a performance that every champion side needs to put in around the midway point of the season.

The Guardian’s Jonathan Liew thinks the big factor behind Liverpool’s recent upturn is that the players look like they’re enjoying their football once again:

And as Liverpool ran rings around a tiring West Ham in the closing minutes, it was possible to glimpse something else too: a team who for the first time in weeks look like they are genuinely enjoying their football.

Cross explained how Klopp’s squad management is key, with the German doing a great job in making everyone feel valued to bring big performances from those less involved when called upon:

A minute later, Jones provided the assist for Salah to score the opening goal, Milner got back up, a huge smile on his face, and went over to celebrate with his manager as if to say: Yeah, you were right, boss.

Klopp also clearly wanted to make a point to Shaqiri when subbing him soon after he had provided the assist for Salah’s stunning breakaway goal. Maybe it was to reinforce the point that some players in Liverpool’s squad do not play as often as they would like but are still an essential part of this winning machine.

Reade praised Salah for stepping up and delivering on a day Liverpool needed him to with Sadio Mane out and Roberto Firmino‘s minutes managed:

That man again steps up when his team need him most.

He was without his two usual partners in crime from the start but again underlined his importance as he ended a six-match run without a goal.

ESPN’s James Olley admired how Salah “elevated” Liverpool’s performance and feels the Egyptian can drive the Reds to fight for the title if he maintains this level of form:

It will be ominous for the rest of the Premier League if Mohamed Salah starts defining matches like this again.

At the London Stadium, he elevated a Liverpool performance that had begun to look a little tired and toothless with Sadio Mane missing due to a minor muscular problem and Roberto Firmino dropped to the bench.

Melissa Reddy, of the Independent, was in awe of the quality of all three goals scored, describing the efforts as “art” with Salah “the chief artist”:

All three efforts, different in nature, could be filed under art and when West Ham did showcase their prowess from a set-piece – Craig Dawson heading in a corner – the damage was already done, designed in beautiful fashion.

Salah was the chief artist in repainting Liverpool.

Jones thought Salah’s incredible second goal confirmed that “Liverpool are back”, with the adventure and execution of the move displaying that the belief has returned:

Six touches. That was all it took to confirm our suspicions. Liverpool are back.

This was Liverpool. From back to front, in the blink of an eye. From defending a corner to wrapping up the points, and all in the space of six touches and 14 seconds.

Meanwhile, the Liverpool Echo’s Paul Gorst explained how it was the introduction of Jones that sparked Salah to life, opening up spaces for the Egyptian to exploit:

But the arrival of Curtis Jones brought about an instant arrival.

Fresh from celebrating his 20th birthday on Saturday, Jones’ willingness to run with the ball unsettled the Hammers, and suddenly, the space opened up for Salah.

Liew was impressed with Jones, labelling the youngster a “direct, restless, skillful presence” in midfield:

Curtis Jones had one of his best games in a Liverpool shirt: a direct, restless, skilful presence in the centre of midfield.

Elsewhere, the Liverpool Echo’s Ian Doyle feels the deployment of Thiago higher up the pitch in recent games has been key to the Reds breaking down stubborn defences:

And it was further compelling evidence Liverpool, with Thiago Alcantara again in a more advanced midfield position, have rediscovered the knack of unpicking obdurate defensive rearguards.

Craig Dawson’s goal, put away from a corner from the right, denied Klopp’s side a clean sheet, but they can be happy with the way they handled the Hammers’ threat here.

Nat Phillips, making only his fourth Premier League start, was excellent against Michail Antonio, while Jordan Henderson was superb alongside him.

The Guardian’s Jonathan Wilson eulogised on Henderson, labelling him “a captain of the most inspirational kind” and lauding his organisation skills which keep the Reds on track:

But equally necessary was Henderson. He has become for Liverpool something more than a player. He is a captain of the most inspirational kind, not just relentlessly energetic, but a constant cajoler and organiser – as these games behind closed doors have proved.

But Henderson embodies something more: he has become the spirit of all that is best about the club, somebody endlessly and selflessly willing to do what the team need rather than what necessarily comes most easily to him.

Doyle thought Phillips did a great job against Hammers danger-man Michail Antonio, and assessed his performance as one that will have earend the full trust of his teammates:

Not least Nat Phillips, who stood firm against the physical might of Michail Antonio to such an extent the West Ham dangerman had been hooked long before the final whistle.

The performance hasn’t lessened Liverpool’s need for central defensive reinforcement before the transfer window closes on Monday evening, but it’s clear Phillips has swiftly gained the trust of his team-mates.

Karl Matchett, writing for the Independent, reflected on another positive outing for Trent Alexander-Arnold and sees the full-back gradually making strides towards his best levels:

Over the past couple of matches, Alexander-Arnold has gradually been on the comeback trail, with his confidence taking a big upward turn as soon as he hit the back of the net against Spurs.

The No. 66 was involved in the build-up for both Salah goals, playing the pass prior to the assist in each case.

Liverpool are next in action against Brighton in midweek, before facing leaders City next weekend.