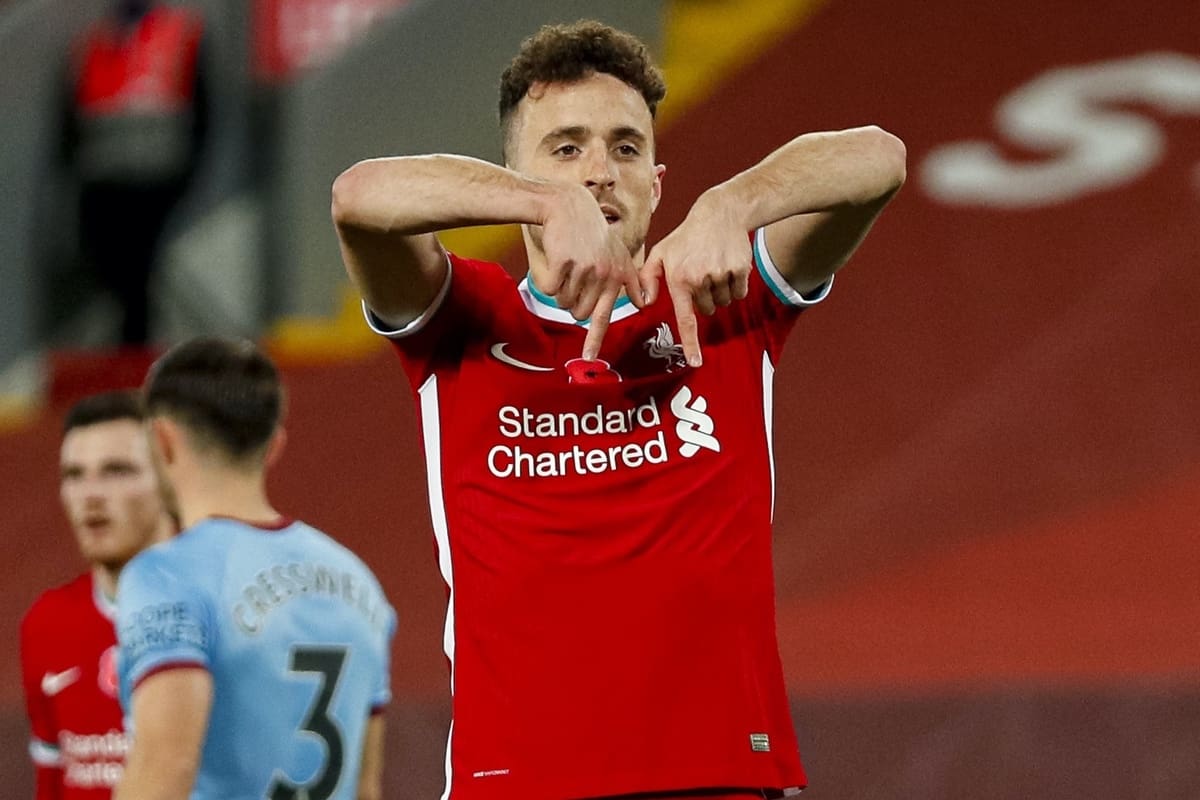 Liverpool’s puzzle is missing more than one piece, but one lying in wait to slot back into the larger picture could very well make it a whole lot clearer.

Liverpool are missing a lot of things right now.

It’s easy to place emphasis on those out of the team when times get tough, yet it’s certainly true that your stock never rises more than when you’re absent – and needed.

Jota’s arrivals raised eyebrows in the summer. It was another rapid Liverpool move. From reports to concrete interest to a done deal, all in the space of a week.

The club’s global fanbase at said point were still struggling to take off the Thiago Alcantara spectacles, so it’s fair to say the forward’s arrival from Wolves harboured a spot further down the podium of interest.

Things soon changed as it became abundantly clear Jota had arrived not simply to take part and play a bit-part role in the squad of the newly crowned champions.

It was a relentless start from the 24-year-old and undoubtedly what Liverpool needed. There was always going to be fatigue this season, a mild hangover from one of the most thrilling campaigns in football history.

Jota’s arrival was another nod to the unrivaled Liverpool recruitment team again remaining several steps ahead of the curve, identifying a player who satisfied all the metrics and had, in wider terms, relatively gone under the radar.

Liverpool are struggling right now because the defence has taken a battering, key personnel are out and the overall shape of the side has been detrimentally skewed. Victories against West Ham and Tottenham proved to be false dawns, as points were again so spectacularly squandered at Anfield, this time against Brighton.

It is, by and large, a butterfly effect, yet the omission of Jota has been a hammer blow. Criticism continues to flow in the direction of Jurgen Klopp for his questionable fielding of the summer signing in the European dead rubber he got injured in. It’s hard to disagree.

While Jota will have his work cut out to constantly threaten a fully fit and firing trio of Mo Salah, Sadio Mane and Roberto Firmino, it is that underlying pressure that the Reds are missing right now.

Liverpool’s Champions League hero Divock Origi watches on from the bench by the week, though the starting front three are under no false pretence that he’s there waiting to take their places in light of a poor run of form.

Attacking strength is there, but not the type of strength needed at this moment. A toothless Liverpool don’t need an impressive flanking artillery, they need a new commander-in-chief to slot straight in and shake things up.

When cumulatively reckoned up, it’s damaging.

It is, however, also important to consider that a drop-off was always likely. Jota’s arrival for just north of £40 million signalled both competition and versatility. For as much as he was set to challenge the likes of Firmino or Salah for their starting berths, he’s also very much there to provide an elite level switch-in as Klopp tinkers the team.

This option has been badly missed. As has Liverpool’s famed efficiency of playing out from the back with precision and dizzying tempo (See; lack of Messrs Van Dijk and Gomez for full diagnosis here).

So what’s left? A team slowly leaking confidence, points being squandered and an unchallenged attacking ensemble getting more heavily questioned as the matches tick by.

It’s a dangerous recipe, posing the potential for a repetitive cycle of struggle. Confidence fades, strikers become desperate to regain their scoring edge – poor, perhaps overly self-serving decisions are made in the penalty area – chances are squandered and/or not laid off to a better option, goals remain scarce and confidence again plummets and the cycle repeats.

It’s something all top sides endure and ultimately snap out of. Liverpool will, too. It is now a case of stemming the blood loss in the meantime.

This side have the experience that goes with winning the European Cup, the league title and almost dusting off an entire domestic campaign unbeaten. Yet, still, they must contend with the most unorthodox of circumstances.

Amid an injury crisis, the full squad is going through daily Covid tests, adjusted training sessions and segregated bubbles within the camp. Outside of club duties each player is – and has been for some considerable time  – restricted to a very small pocket of human interaction, to adhere to the ever-changing health rules and guidelines for professional sport.

Football is a lifeline for so many people right now, a shred of normality in an otherwise confusing and very nondescript world. It’s very easy therefore to innocently overlook the fact that footballers, for all their privilege, are simply doing their job in very unique and testing circumstances.

Testing both physically and mentally. Where is their outlet? Their release, a glimpse of how life should be?

A lot is happening right now in football, and Liverpool’s negotiating of a form-crisis is just one small element of it.

The pieces of the puzzle may feel as though they are strewn all over the floor right now, but it isn’t the case. For all the points surrendered in recent weeks, Liverpool haven’t played exceptionally poorly. They just haven’t done enough, and paid for it as a result.

It’s now a waiting game before Klopp assembles his most important returning pieces in the correct order, to see the full picture once again. Or, at the very least, a clearer picture than what’s on show right now.

Early February was the initial window of return pencilled in for Jota and the recent photos of him putting in the hard graft at the AXA training base bode well.