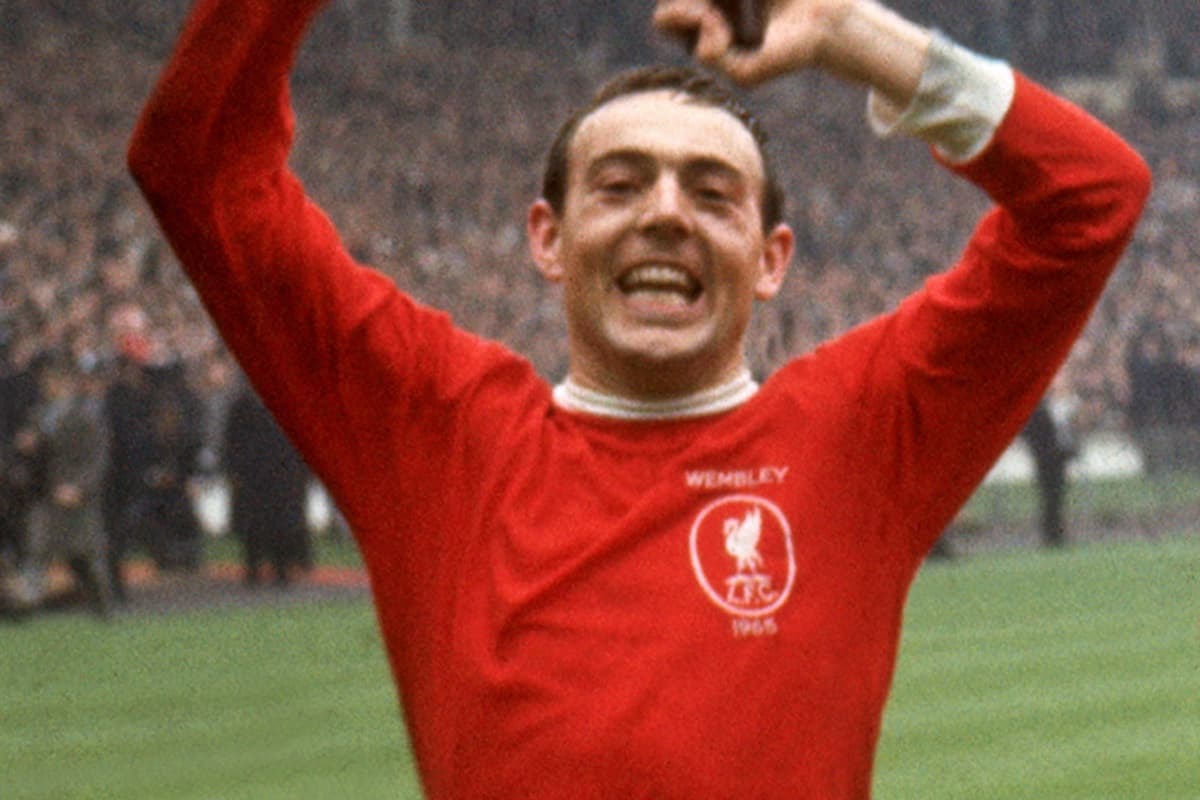 Following the sad news of the passing of Liverpool legend Ian St John at the age of 82, all those associated with the club paid tribute to an Anfield great.

It was confirmed that St John passed away on Monday evening after a battle with illness, leaving many to honour a forward who was one the ‘corner-stones’ of Bill Shankly‘s side.

The former forward landed at Anfield in 1961 and helped set a revolution in motion as Liverpool rose from the Second Division to the champions of England.

St John would make 425 appearances for the Reds in his 10 years at the club, scoring 118 goals which has him currently placed joint-13th in Liverpool’s all-time goalscoring chart.

The Scot would end his Liverpool career with two First Division titles and an FA Cup, the latter of which will always be remembered for his iconic winner against Leeds in 1965.

And his iconic quote: “There’s no noise like the Anfield noise – and I love it!”

After his playing days, he would take up a role in management and in the media and his passing was met with tributes from across the football world, including current and former players.

Here’s how Reds paid tribute to the Saint…

Heartbroken. Impossible to express how much he meant to me and our Club, but how much our Club meant to him. I’ll miss you Saint, I’ll miss you so much ?? pic.twitter.com/0ls2g8GCDe

Saddened to hear the news regarding Ian St John. Condolensces to his family and friends. A giant in the rich history of Liverpool Football Club. He helped lay the foundations. Latterly a very fine broadcaster and always wonderful company. RIP Saint. YNWA.

RIP Ian St John ?another Liverpool Legend sadly passes away. One of the players along with Bill Shankly who made this club what it is today. I’ll remember him most on the best football show on tv, The Saint & Greavsie. X pic.twitter.com/E1VSJsUoZs

Sad news. Thoughts are with the family. Rest in peace, Saint ?? https://t.co/JvBlV0gXPk

A man of warmth, humour, knowledge, wisdom and joy. Scotland and Liverpool has lost a true giant. My love goes to his family. Rest in peace Ian St John pic.twitter.com/Lygr8oFbcf

RIP Ian St John – what a player, what a man.#ynwa#legend pic.twitter.com/J9rP3HNkbo

So sad to hear the news of the great (Saint)Ian St John passing away.What an inspiration watching from the terraces at Anfield he was,also a cracking bloke.Our Thoughts are with his https://t.co/eY6hC0P1eC St.YNWA

Ian St John was a terrific human being and a fantastic footballer as well. Our interview with the Saint 13 years ago was simply fantastic. He was full of enthusiasm and told us his tales with with a big smile. St John passed away yesterday. We will remember him always. pic.twitter.com/FtfkgxxOkM

Very sad to hear of the passing of a true Liverpool FC great.

So sad hearing the news bout The Saint Ian St John. A top, top fella, what a player, loved his company in the commentary box over the years and a Liverpool icon. YNWA Saint

So sad to hear of the passing of the Saint. He gave me one of my greatest childhood memories in him winning the FA Cup in ‘65.
RIP Ian, YNWA.

A legend and a friend to many…

Incredibly sad news. Not only a great footballer but also a great broadcaster. And, as I know from personal experience, a kind, funny and lovely man.

RIP Ian St John. Spent an afternoon with the Saint at his house in 2014 for a piece in The Kop Magazine – the man is an absolute Liverpool legend and THE signing that kickstarted Shankly’s 60’s revolution. Thoughts are with the family #LFC pic.twitter.com/s2vwTZJS8h

Such a sad loss. Ian St. John: A gentleman and the funniest ex player to tour with. His arrival to @lfc alongside Ron Yeats were the two most vital Shankly signings to get the Reds back where they belong, in the top flight football. Thank you, The Saint you will be greatly missed pic.twitter.com/NfGLMxCeMU

Not The Saint ? A Liverpool giant whose signing, along with that of Ron Yeats, marked the start of Shankly’s revolution. His love for his former manager and our club shone through in every interview. May he rest in peace. YNWA

Ian St John was one of the giants that this club was built on. He'll be sorely missed and remembered forever. Rest in Peace Saint.

My first hero. What a player. What a character. God bless you Saint. pic.twitter.com/zfO0dZTrqI

I grew up to the tales of Ian St John the footballer. I watched him on tv and he became a hero. Then, I got to work with him and it was everything I’d hoped it would be. A funny man. A lovely man. A great man. I’ll miss you Saint. Thanks for the memories

Absolutely heartbroken. I can’t even begin to explain how wonderful, funny, caring and incredible this man was. A huge impact on the lives of all us who had the privilege of knowing him – never without a smile. Good night, god bless, Saint. My dear friend. ? pic.twitter.com/Ph5ucj0p0t

Horrible news ? Another that my grandad has told me so much about, a true Anfield great. RIP Saint #LFC https://t.co/MeUjBulHak

RIP the Saint. A true Liverpool legend. Met him a couple of years ago and was completely speechless. He could see I was struggling and just said "you're alright son" pic.twitter.com/CftIqmFKkT

Liverpool Legend Ian St John has passed away aged 82. One of the 1st Kop heroes, idolised by past generations of Reds. The Saint will be sadly missed.

"Supporters, they mean everything to me, when I come out on the field on a Saturday – I'm prepared to die for these people." RIP pic.twitter.com/HwdWA9SdMF

Players like Ian St John are what the modern day Liverpool is built on and we owe them all so much.

So sad to hear about the passing of #LFC legend Ian St John. He was a key part of the Reds escaping from Div 2 and winning the league again – and their first ever FA Cup. After that he moved into media, ITV for years and then years more with Radio City in Liverpool. RIP Saint.