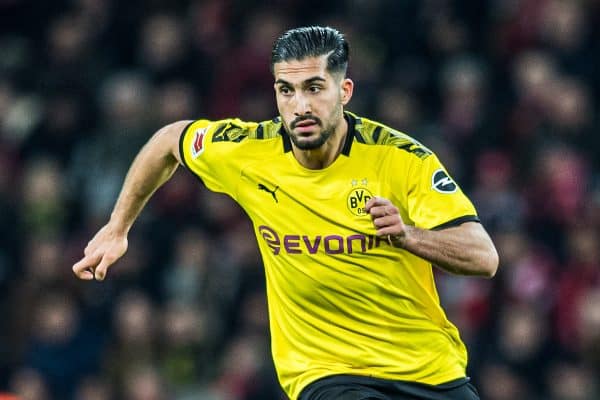 As Gini Wijnaldum edges towards the exit and Liverpool consider the Dutchman’s replacement, Harry McMullen suggests an unlikely return to Anfield for Emre Can.

‘Never go back’ is an old adage in football, even older than the media penchant for linking players with returns to former clubs. And there is some wisdom to it, though our own Ian Rush and Robbie Fowler would beg to differ.

The name Emre Can is rather less warmly received on Merseyside. How many of you clicked intending to race down to the comments to remind us he betrayed the club by running his contract down, that he ‘was deadwood anyway’ and ‘thought he was better than Liverpool’?

And maybe there’s some truth in that. What’s definitely true is that Can’s best numbers for Liverpool came in his final season, despite playing with one foot out of the door.

Jurgen Klopp was keen to keep him, and the player was willing to stay – provided the club could agree on a release clause, something they don’t do on principle.

With Gini Wijnaldum now free to agree pre-contract terms elsewhere – and possibly even having already done so – Liverpool are inevitably casting an eye over the summer window to find a suitable replacement.

So with both the Reds and Can’s current club Borussia Dortmund in need of a shakeup after a difficult season, would a deal make sense for all parties?

In yellow and black, Can has found himself taking a more defensive role than we saw in red, operating in a double midfield pivot or at times as a centre-back – not unlike Wijnaldum’s own redeployment at the base of midfield this season.

Despite playing 700 fewer league minutes, he stands up well in ball recoveries (150 to the Dutchman’s 151) and pass accuracy (87% to 92%) while boasting a superior rate of interceptions (38 to 21, despite playing a lower pressing game) and aerial duel success (66% to Wijnaldum’s 51%).

He also acquits himself well against Liverpool’s specialist No. 6, Fabinho, even when weighed against the Brazilian’s title-winning season.

Overall, his stats compare well to his excellent final season at Liverpool, despite coming in fewer games, suggesting that amid a tough spell at Juventus and Dortmund’s current woes, the player Klopp once described as “a top lad and a wonderful, versatile footballer with an outstanding attitude” has only improved since leaving Merseyside.

Any replacement for Wijnaldum must possess that versatility, with the Dutchman having proved proficient as a No. 8, No. 6, double six, centre-back and false nine under Klopp.

Can’s own time at Anfield saw him fill all three midfield roles to great effect, as well as operating at centre-back and right-back. More recently at Dortmund, he has functioned in a back four and a three.

This flexibility could offer future solutions for the Reds, as well as allowing the likes of Fabinho and Jordan Henderson to remain in their preferred midfield roles should another defensive crisis occur.

The German’s clear height advantage (standing at 6’1″ compared to the 5’7″ Wijnaldum) also offers an increased vertical presence, with Klopp recently resorting to Divock Origi against taller opponents despite his relative lack of aerial prowess.

A returning defensive partnership of Virgil van Dijk and Joel Matip (or perhaps 6′ newcomer Ozan Kabak) alongside a midfield trio of Fabinho, Henderson and Can could finally see Liverpool dominate in both boxes.

It is an incremental gain that could make a big difference, especially against teams sitting deep and packing out the penalty area.

And outside the box, from where Liverpool have scored just three times this season, Can has not lost his ability to make headlines.

Availability and value for money

But perhaps the biggest incentive is the potential to get an excellent deal.

Dortmund are in the midst of a torrid season, led by an interim manager and defying statistics to lose games.

The currently fifth-placed side are in real danger of failing to qualify for the Champions League, which owing to the club’s financial model could force a massive sale of first-team players to make up the shortfall.

In the absence of a transfer fee for Wijnaldum, the Reds will be in the market for a bargain, with mooted targets such as Yves Bissouma and Denis Zakaria sure to command fees in excess of £40 million.

Can, meanwhile, is valued at just £23.4 million by Transfermarkt, while Dortmund’s precarious situation may make them vulnerable to Michael Edwards’ charms.

The midfielder’s previous stint with the club would allow him to slot straight back into the fold without a complicated bedding-in process.

It should, as well, rule out competing bids from Premier League rivals – as the player stated himself when Manchester United came sniffing around. Not bad for a rat, eh Reds?

So while some people will surely remain unmoved, there is clearly a strong case for the former No. 23 to return.

With the player’s numbers steadily improving as he reaches his peak (he’s still only 27), his tactical profile offering plenty of solutions and favourable financial conditions around the deal, perhaps Emre can recapture Liverpool hearts and help restore the club to its perch.

* This is a guest article for This Is Anfield by Harry McMullen. Follow Harry on Twitter, @mcmulhar.