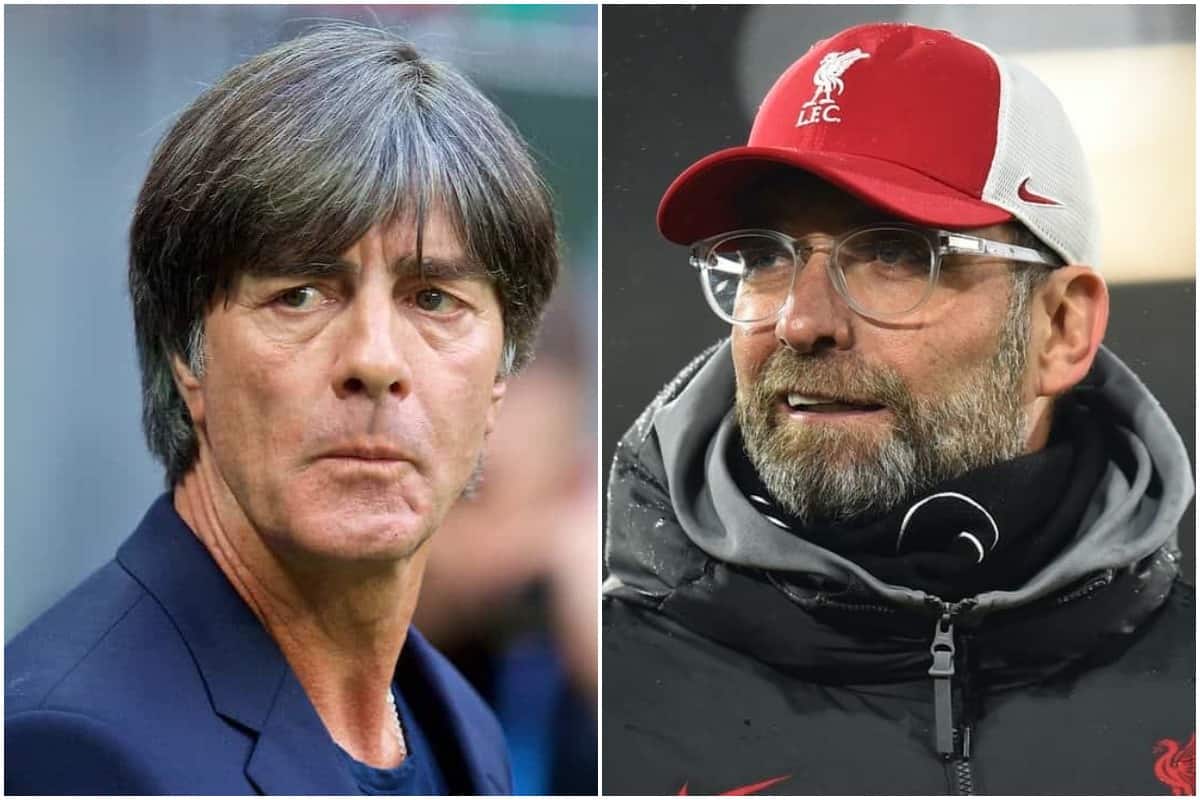 The German FA are widely thought to want Jurgen Klopp as their next boss, so Liverpool fans are understandably concerned that Joachim Low is set to leave.

The long-serving national team head coach won the FIFA World Cup in 2014 with Germany, as well as reaching the Euro 2008 final.

He’ll be in charge at this summer’s European Championships, too – but then his 16-year reign with Die Mannschaft will come to an end.

Low’s contract was due to run until the end of the 2022 World Cup, but he has asked and been granted an early exit, with the DFB confirming as much on Tuesday.

Joachim #Löw will step down as national team head coach after @EURO2020. pic.twitter.com/t4OuyQmaSC

Naturally, thoughts have immediately turned to his potential successor, and it hasn’t taken long for Jurgen Klopp‘s name to come up.

The Express say Klopp and Bayern Munich boss Hansi Flick are the front-runners, while Sky Sports point out that the Reds boss was asked about the role as recently as November.

His answer was a pretty emphatic ‘not just now, thanks’, though of course much has changed – and not for the better – around the Reds since then.

“I’m not sure if anyone asked for me or whatever, but if they don’t know, I have a job at Liverpool. And even though the weather is bad again, I like it!”

In the coming days or weeks, it’s likely that Ralf Rangnick will be another name in the frame, while the DFB could opt for another more senior, but less-heralded, name such as Low’s assistant Marcus Sorg.

Low himself was promoted to the top job after being Jurgen Klinsmann’s No. 2, and Sorg has been with Low since the start.

The Independent listed the early favourites to replace the current boss according to bookmakers, with Klopp second behind Stefan Kuntz, the Germany U21 boss.

Only this very week, local reports on Merseyside said there was no prospect of Jurgen facing the sack from Anfield after the dismal recent run.

The expectation was that a summer rebuild, as well as getting back injured stars and clearing the wreckage of this season, would have the current boss as a central pillar.

But even Reds supporters can see that this could be a case of the stars aligning – if Jurgen actually wants to take over as a national team manager.

Klopp would be mad to reject this job. Its available for the first time in 15 years. If it takes another 15 years than Klopp will never get the chance.

FSG best be backing Klopp in the summer ffs, low leaving the Germany job after the euro’s, as much as klopp loves Liverpool he’s going to be Tempted by it..

Couldn’t help but think of Klopp leaving as soon as I saw that Joachim Low news pic.twitter.com/jMYCHhbSXP

Of course, some went even further on the back of Rangers’ recent title success and decided that the time was ripe for a Low-Klopp-Steven Gerrard replacement train to kick in, but that’s of course stretching fantasy land to breaking point.

With Klopp still vociferous in his intent to get the Reds back on track – and having a contract of his own which runs for years yet – there’s no immediate need for panic.

But it would of course be natural for all parties to think carefully about the situation, which means that includes the club having at least some base contingency plan for if our manager was to depart, for any reason.

A big success and progress to the last eight of the Champions League on Wednesday night would do plenty to bring positivity back to the present moment, though, and give hope that the Reds can mount a revival of sorts this season.

As for next year and beyond, there’s a lot of football to be played beforehand, which will dictate everything from competitions to finances to players who stay involved into 2021/22.