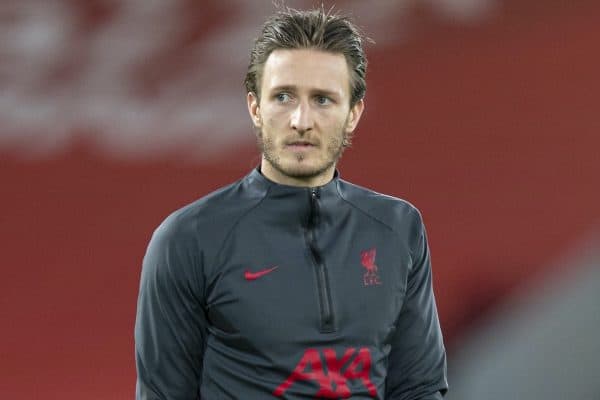 Jurgen Klopp has looked to explain why Ben Davies has yet to feature for Liverpool but refuted suggestions he has already decided he will not play this season.

The Reds landed Davies from Preston in a double deadline-day deal which also saw Ozan Kabak arrive at Anfield with centre-backs in short supply.

But while the 20-year-old was injected into the side without delay, Davies has been on the periphery and has been named only on the bench in four of the nine games since joining.

A number of knocks and fitness issues have been cited for part of his lack of game time, while Klopp has also touched on the settling in period – one made harder by moving in a pandemic.

The manager pointed to the adjustment period Andy Robertson went through prior to his breakthrough as it not being out of the norm before explaining he never wanted to immediately throw two new faces into a demanding position.

“It was always clear when a lot of players came here to Liverpool, and the most famous story is Andy Robertson took half a year in a normal season where pretty much everything else was kind of settled to settle in,” Klopp told reporters.

“Ben is a really good player but he has to get used to all this stuff here as well, that’s how it is. We still have options and hopefully, it will stay like this.

“I don’t make these kinds of judgments [if he is not to play this season]. I don’t tell Ben we have just to train until mid-May and then we see further, no.

“It will take as long as it takes. But the problem was that it was clear that we will not start with two new centre-halves if we don’t have to because of the situation.

“In this position, it is really important that the boys in the last line are used to each other and the more games you can play together, the better it is.

“That’s why we always fiddled a little bit here and there and and try to make it as consistent as possible, but a lot of things disturb that process, but now it’s okay.

“Ben will play when he will play. That’s how it is.”

The Atheltic claim Liverpool had been “monitoring Davies for 12 months” before pursuing a move, but his adjustment period coming from the Championship should not come as a surprise and as Klopp noted he is not the first, nor will he be the last, to need one.

But whether Davies does ever play for Liverpool remains to be seen, although it is likely to remain a valuable investment with the Reds expected to recoup their £1.6 million outlay and more.