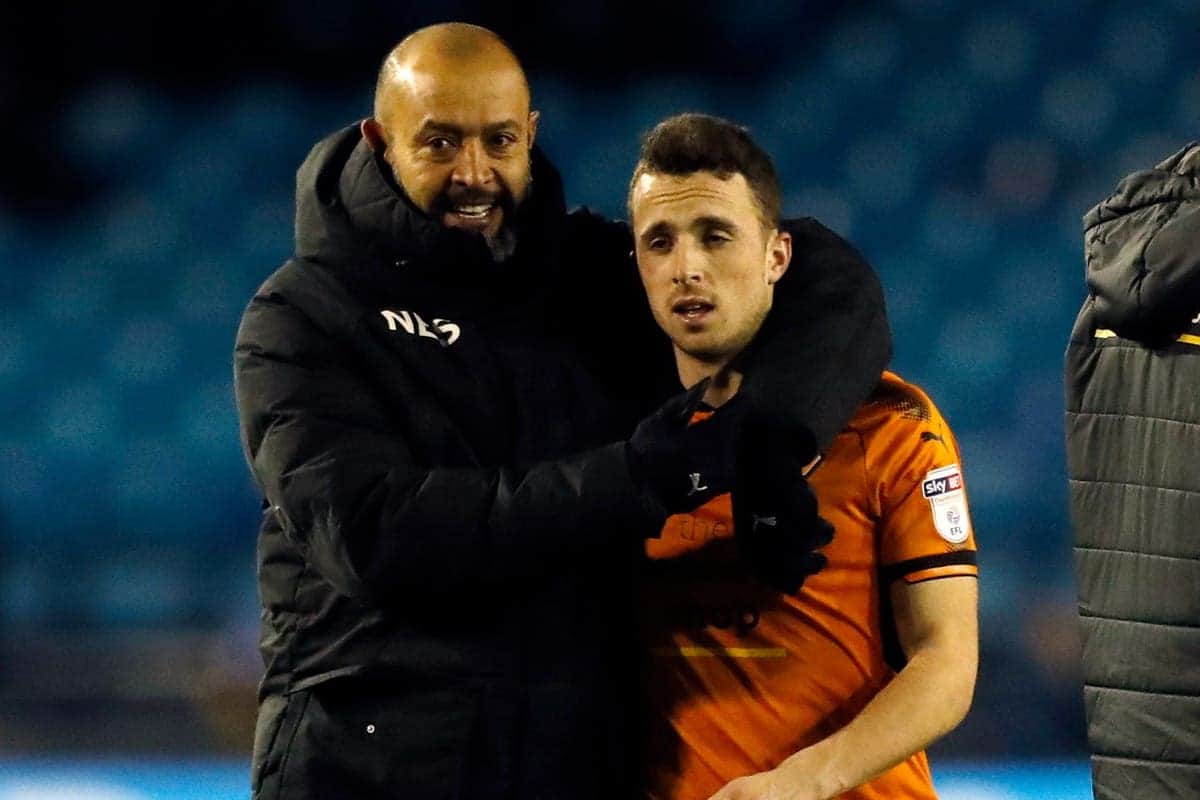 Nuno Espirito Santo has vowed to give former Wolves forward Diogo Jota a “big, big hug and eventually a kiss” ahead of his Portuguese compatriot’s return to Molineux with Liverpool on Monday evening.

Jota joined Wolves when they were in the Championship in July 2017, having spent the previous season on loan from Atletico Madrid at Porto, and was instrumental as the midlands club earned promotion the following year.

He scored 44 times in 131 appearances for Wolves, including memorable hat-tricks in Europa League wins over Besiktas and Espanyol, before he was signed by Liverpool last September in a deal that could rise to £45 million.

The 24-year-old has recently returned to action following a knee injury and could feature against his old club, and Wolves head coach Nuno is ready to embrace his former player in recognition for what he helped them achieve.

“I will give him a big, big hug and eventually a kiss, this is how much I like him,” Nuno said.

“The friendship that we had for four or five years together every day – big hug!

“I’m absolutely sure that if Molineux was full of our fans, he would have a huge reception because what Diogo did with us was amazing, fantastic, beyond words. He was truly admired because he gave everything he had for the club.

“He joined us in the Championship coming from Porto, put his life and heart here and that cannot ever be forgotten. He went to a fantastic club, now he’s healthy again and playing football again. I wish him all the best.

Liverpool have been on a downward spiral in the Premier League for a number of weeks, with six defeats in their last seven matches all but ending their title defence and leaving them with a challenge to finish in the top four.

But the comebacks of Jota and Fabinho stabilised the side in their Champions League triumph over RB Leipzig last week ahead of their trip to Wolves, who will be looking to end their three-game winless streak.

Fabinho was first brought to Europe by Nuno, who recalls the brief time he spent managing the Brazilian after signing him for Portuguese outfit Rio Ave in June 2012 before he left on loan just a month later.

“Fabinho is an amazing player, a fantastic player. We were together in the beginning at Rio Ave when he came to Europe,” Nuno added. “It was many, many years ago.

“I was just starting basically with the same technical staff that we have here in Rio Ave.

“We brought in two players from Brazil: Filipe Augusto and Fabinho. We were together for two weeks and from out of nowhere he goes on loan to Real Madrid. I said I teach this boy in two weeks very well!

“He was not the player that he is now. He was just a young boy full of talent. He’s a fantastic boy and an amazing football player.”