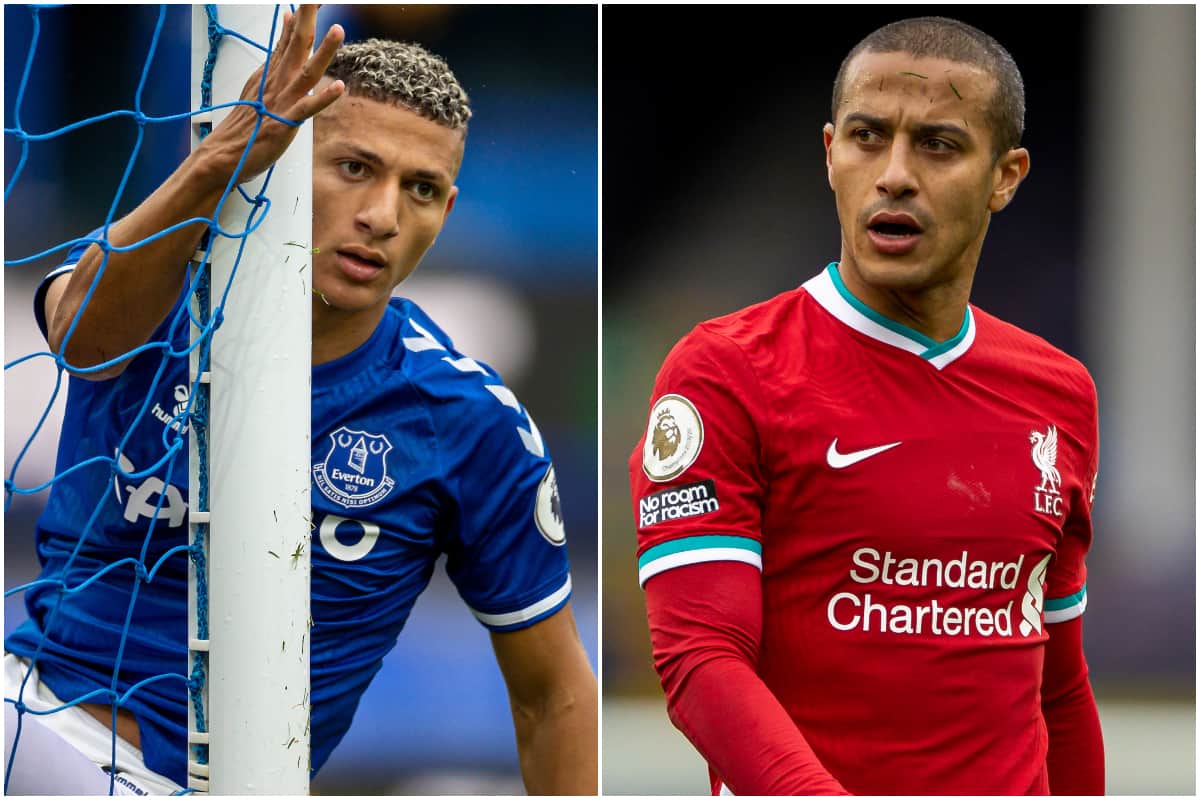 Richarlison claims Thiago “ignored” his apology message after his red-card challenge in October’s Merseyside derby, adding that he “didn’t look at him” in the next meeting.

Thiago missed two-and-a-half months of action due to a knee injury inflicted by Richarlison in the 2-2 draw at Goodison Park, with the Everton striker suspended for three games as a result.

The pair both started in the Blues’ 2-0 win at Anfield four months later, with Richarlison scoring the opening goal in a miserable defeat for Liverpool.

In a conversation with David Neres, David Luiz and Julio Cesar for journalist Asmar’s YouTube channel, as translated by Sport Witness, the Brazilian reflected on the tackle and his attempt to apologise to Thiago.

Taking a leaf from Zlatan Ibrahimovic’s tiresome playbook, Richarlison referred to himself by his nickname, “the pigeon,” and insisted Thiago had “ignored” his Instagram message after the derby.

“The last game I made that challenge on Thiago and got sent off. My goodness,” he said.

“Then I went on Instagram to apologise and such. He only read it.

“I said ‘I’m going to delete this message too, since he doesn’t want to reply’. Then I went there and deleted it.

“He didn’t answer, no. Then there was the derby now, at their home, he didn’t look at my face, I didn’t look at him, either. The game goes on. He ignored the pigeon.”

Richarlison, of course, already issued a public apology via social media after the game, claiming he “was never a violent player” and that the challenge was “a fatality from sheer over-dedication.”

But elsewhere in this week’s interview, he spoke about a “little fight” with Virgil van Dijk last season, explaining that it was “just like in every game I have with one of their players.”

It would be wrong to read too much into this, or his immature response to Thiago leaving him on read, but it certainly seems as though Richarlison is caught up in his own hysteria.

The Merseyside derby is, rightly, fiercely contested, but in recent clashes it has been Everton who have approached the ties heavy-handedly, with Jordan Pickford’s season-ending tackle on Van Dijk overenthusiastic at best.

Richarlison seems to feed off the manufactured emotion of the derby, and these recent comments should come as no surprise – except perhaps that they came from a 23-year-old, not a 13-year-old.