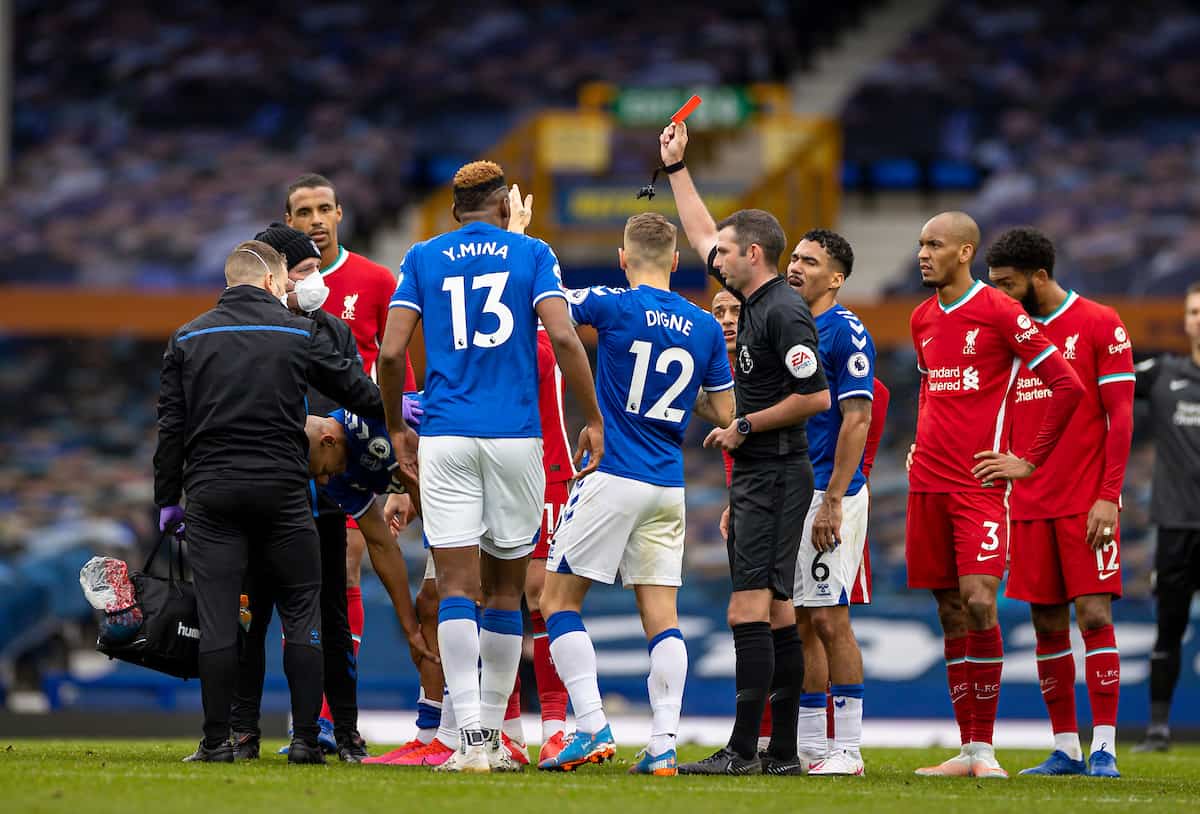 Richarlison has claimed he has never been a “violent player,” issuing a public apology to Thiago for the challenge that earned him a red card in the Merseyside derby.

The two sides were poised at 2-2 in a controversial derby at Goodison when Thiago and Richarlison battled for a loose ball in the middle of the park.

Thiago, who was outstanding on his first start for the club, got there first and was then subject to a nasty lunge from the Everton striker, whose studs collided with the Spaniard’s right knee.

Liverpool’s No. 6 now faces a wait to learn the results of a scan, amid fears of him and Virgil van Dijk joining Alisson on the long-term injury list.

It was a clear red card challenge from Richarlison, in a fixture that has seen him embroiled in heated exchanges on a number of occasions in recent meetings, and somehow it wasn’t the worst tackle produced by an Everton player on the day.

But the 23-year-old has insisted it was unintentional, apologising to Thiago both privately and now publicly, via a post on his website.

“Everyone who knows my background knows that I was never a violent player,” he wrote.

“What happened today was a fatality from sheer over-dedication. I did not enter that [challenge] with the intention of hurting Thiago.

“When I saw that the [collision] was going to happen, I picked up my foot and hit him with my knee in the [process], which was inevitable due to the speed of the play.

“I already sent a message to him apologising and I also do it here publicly. I hope he hasn’t been hurt and that everything is fine.”

Unfortunately, the damage may already be done, and Richarlison’s contrition has already come into question due to a now-deleted follow-up tweet from the Brazilian.

In response to a tweet sharing images of his apology and the challenge itself, the striker then posted another image from later on in the move, seemingly claiming his innocence and that he himself was injured in the process:

I didn't believe Richarlison apology for a second. He posted and deleted this earlier. It was a fake and hollow apology. pic.twitter.com/ZtxrUGGv4b

And when accused by one Liverpool fan of having “done this repeatedly,” Richarlison asked: “When did I do this before?”:

repeatedly? When did I do this before? ?

Of course, this was not the most controversial incident in the game, with Jordan Pickford’s horrendous tackle on Van Dijk and the ineptitude of video assistant referee David Coote looming larger over the result.

But it is a situation that adds more fire to the derby, and could heap more misery on Liverpool with it still unclear if Thiago faces time on the sidelines.