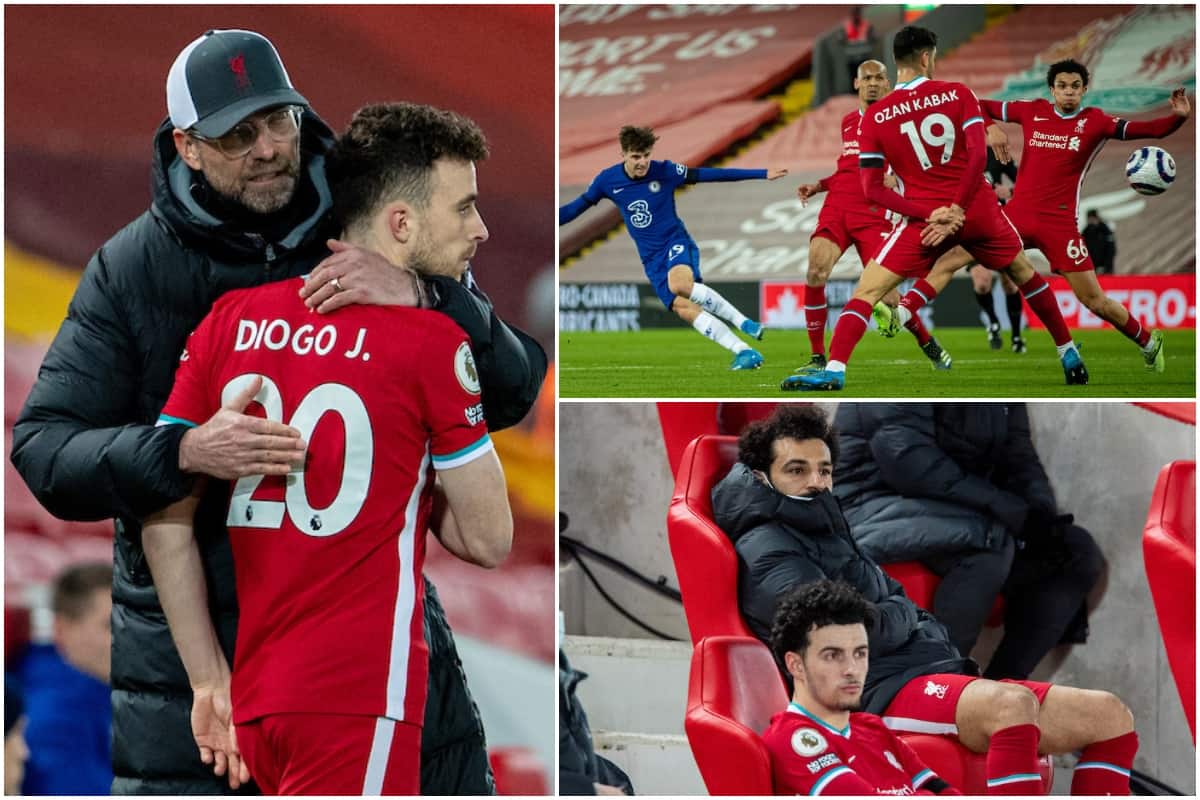 Liverpool were left with a familiar taste of defeat against Chelsea in a performance which inspired little confidence for a return to form and raised more questions from fans.

With the target for the season having shifted to the top four, the visit of Chelsea was one the Reds could ill afford to see all three points return to Stamford Bridge.

But they did just that after failing to turn possession into meaningful chances on goal while the Blues made the most of theirs before the break thanks to Mason Mount.

Jurgen Klopp‘s substitutions proved a big talking point when chasing the game and after being unable to turn it around, a steeper mountain now needs to be summited with just 11 games left.

Here, This Is Anfield’s Joanna Durkan (@JoannaDurkan_) is joined by Samuel Cox (@samueljessecox) and Scott Groom (@ScottCGroom) to discuss the highs and the lows from Liverpool’s defeat and another batch of questionable Klopp substitutions.

SAM: I thought Liverpool were in the game and played decently enough (to get a draw) in a tight contest, but they just aren’t getting the results.

The fine margins by which they were once deciding games are going the other way. Nonetheless, the return of Fabinho and Jota are massive positives.

The focus must now be on turning those fine margins in our favour, and to that end getting our best players back on the pitch is essential to what must remain the target despite this loss: securing fourth place.

SCOTT: Well, good things… I’m not sure where to start with this.

It was beyond drab and disappointing once more, but I guess it was a good sign to have both Jota and Keita back in the squad after lengthy injury layoffs. I suspect they’ll both be getting a lot of game time soon as Klopp simply has to start shaking things up. 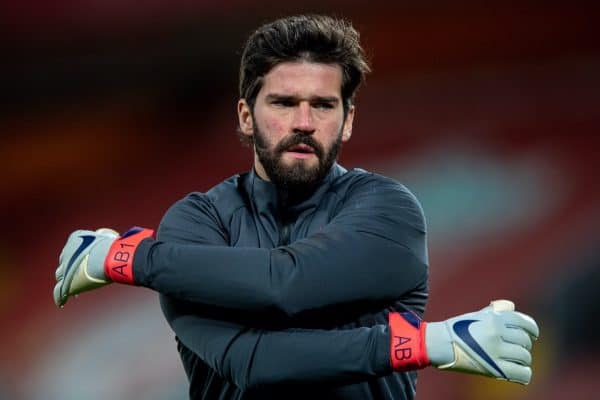 It was also great to see Alisson back after the tragic passing of his father. That’s as far as I can go in terms of being positive.

JOANNA: It’s a sign of the times when the only positives we can really muster are players returning to the team and no further injuries reported.

Like Sam, I’ll say it wasn’t the worst performance I’ve seen from Liverpool in recent times and a more clinical outing may have reaped a different result, but I’m really grasping at straws.

Here’s hoping for better days ahead!

SAM: In the current dire run at home, the finger can be pointed in practically every direction, but given what is still a makeshift defence held Chelsea to one goal, perhaps the attacking half of the ground should be held more culpable.

Mane and Firmino are not finding the goals currently and no one from midfield or defence looks like helping them consistently. Add to this Salah’s early substitution and we have another goal-scoring blank.

Ever since that 7-0 destruction of Crystal Palace, the goals have been, too often, hard to come by, part of a wider malaise. The return of Jota, an excellent signing whose absence has corresponded to the recent decline, will hopefully inject the fresh dynamism required over the next few weeks.

SCOTT: There are far too many bad points to be able to condense this down into a short answer.

But I think for me, one of the most worrying things was the fact that the frustration is beginning to become visible from the coaching staff and players among themselves and with each other.

Through good times and bad, there’s been a real harmony about this Liverpool side but even that seems to be being compromised at the moment, which for me is a huge concern. The lads need each other now more than ever to pull themselves out of this slump.

JOANNA: Hard to disagree with any the lads have said there so I’ll just keep my list simple:

And what did you make of Klopp’s choice of subs?

SAM: I think substitutions are an impossibly hard thing to judge and draw conclusions from. It seemed strange to take Salah off, but you never know what the reason behind the scenes is, and he, like much of the rest of the team, was not setting the world alight.

I think fundamentally, the focus on substitutions is a symptom of where Liverpool are at, not a cause.

Although they have had positive impacts in the past, Klopp, like any good manager, has never relied on substitutions, instead focusing on putting the best team, with the best tactical plan, on the field from the start, and fighting to the last minute.

Substitutions are something of a ‘Hail Mary’ and in a time when nothing is quite working as it should, it’s no surprise they too are going wrong. 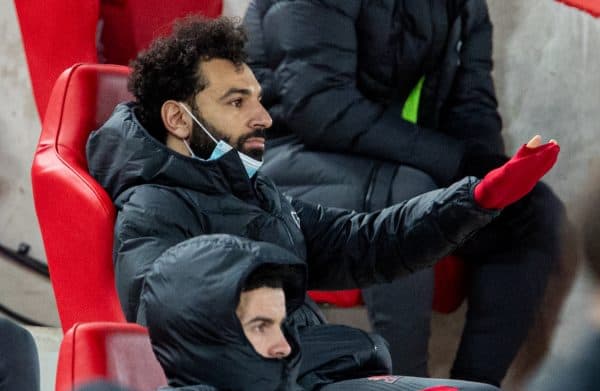 SCOTT: Klopp’s rationale around subs has always been a bit of a puzzling one, but the latest changes were the worst of them all.

Salah looked like one of the only ones on the pitch who cared and was trying to take the game by the scruff of the neck. I’ve seen bits flying around about his lack of tracking back, but that seems a bit petty considering the importance of the game and the real need to avoid defeat at the very least.

But the changes weren’t even good ones, and to bring Milner on (no disrespect to him) when we’re chasing a game and in need of a goal was bamboozling. I still cannot make sense of it.

We love Klopp, we really do, but he’s not exempt from criticism and he deserves it for this and his stubbornness for refusing to change a system that clearly isn’t working. 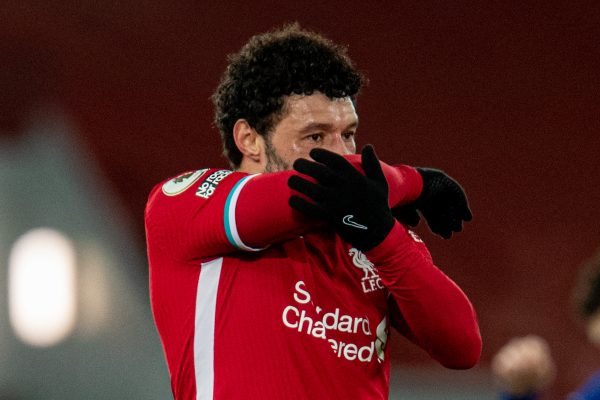 JOANNA: As Scott said, Klopp’s subs can always prove to be a point of contention and act as a bit of a surprise from time to time.

But it was especially hard to get your head around against the Blues. First with Salah who looked the only potential threat in the front six, not to mention he is our leading goalscorer. When Mane and Firmino remain a shadow of themselves it was truly baffling.

Don’t forget, we were chasing the game and those feelings were only compounded when he opted for Ox and Milner over the likes of Shaqiri and Keita.

The vice-captain would have been fine if we were at 1-1 or defending a lead, but it’s not really his job to trigger the attack as one assist in one year across all games shows.

We had nothing to lose when he looked to the bench, but it was not quite the time to reward training performances when another game was on the line. Risk vs. reward anyone?