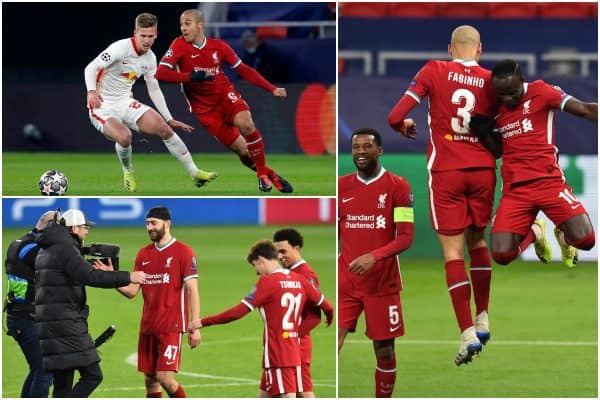 It was a welcome night of positivity for Liverpool as they replicated their first-leg triumph in the second to seal their place in the next stage of the Champions League.

A second successive 2-0 win over RB Leipzig was cause for celebration for Jurgen Klopp‘s men as they put their league troubles behind them for a spot of European success.

Mo Salah and Sadio Mane were once again on the scoresheet in Budapest as the Reds enjoyed one of their best performances of 2021 as some sense of normalcy returned to the XI.

The 4-0 aggregate win over their German counterparts ensures there remains a cause for optimism for Liverpool’s season with the dream of a return to Istanbul still on the cards.

The next stage of the draw could very well shape such hopes but that it is a discussion at all is worth celebrating after an otherwise season to forget.

Here, This Is Anfield’s Joanna Durkan (@JoannaDurkan_) is joined by Stephen Killen (@SteKillenLFC) and John O’Sullivan (@NotoriousJOS) to discuss the highs and the lows from Liverpool’s much-needed victory and who they have their eyes on in the quarters.

STEPHEN: Into the hat for the next two draws, what more could you want?!

How good was it seeing that midfield trio of Gini Wijnaldum, Thiago and Fabinho? Instil a bit of confidence in those three and we will see the free-flowing transitions of old.

And it was also great to see Diogo Jota, Sadio Mane and Mohamed Salah combining, just need to build on it now.

JOHN: Players back in their actual roles! Fabinho in midfield and defenders in defence.

Fabinho was absolutely superb in midfield. He gave Thiago, in particular, the platform to get forward and influence and control the game in that part of the pitch.

His ability to use those long legs to quench attacks before they start and keep teams pinned in their own half is a factor that Liverpool have badly missed. It must be a claustrophobic experience to play the Reds when Fabinho is on song like that. You end up trapped in your own half and having to deal with wave after wave of attack.

Also, Ozan Kabak. Nat Phillips, who was busier, is getting more of the plaudits – and he deserves them – but Kabak was superb in a measured and subtle way.

His passing was sharp and he dealt with everything thrown his way with an authority far belying his tender 20 years.

And, the bench. It feels like an age since Liverpool had game-changers from their bench. Both Divock Origi, with an assist, and Naby Keita, who looked sharp, contributed when they came on. Hopefully, the injuries will ease up and the Reds can use more of their squad as the season progresses.

JOANNA: Can only echo the words on the midfield from the guys as balance was finally restored and we started to see exactly what Thiago was brought in for.

I had not expected Fabinho to get a midfield nod and his performance only showcased how much we have missed him setting the tone and springing Liverpool into action.

With John rightly praising Kabak, I’ll just tip my hat off to Phillips for an assured and confident display which will continue to provide Klopp with the rare luxury of choice.

Overall, a team performance we’ve been craving for some time and now the quarter-finals beckon, bring it on!

STEPHEN: We should’ve won by more really, that is the only real negative. It’ll take time but finishing and the final pass wasn’t good enough but signs are there – at long last!

JOHN: Thankfully, there are precious few negatives. I thought the attack understandably showed a lack of synergy at stages as Stephen mentioned. There wasn’t the connectivity that Firmino provides, especially in the first half.

They did combine well for the first goal, but they left a lot of goals behind too with missed chances. I would like to see them again as a trio, but they can definitely function better as a combination.

JOANNA: Isn’t this a nice change? Negatives have outweighed the positives recently and the only real gripe one can have this time, as the guys said, is we didn’t convert more of our chances.

There was indecision aplenty across the entire pitch and that’ll come with the continual talk and experience of missing opportunities in front of goal.

Aside from that, think Andy Robertson is due for a much-needed rest!

And was anyone able to follow Michael Owen’s post-match chat on BT Sport?

And who do you want in the quarter-finals?

STEPHEN: Anyone. Bring on whoever they throw at us. If I could pick why not Dortmund? Show Haaland his new team-mates and get him used to Merseyside for the summer.

JOHN: As for the draw, I too would pick Dortmund. They have a lot of firepower, especially Haaland, but they are a young team that will give you chances. I think Liverpool would be too streetwise for them.

It would be a shame for this tie to be played behind closed doors, however, given the passion and pageantry of the two fanbases.

JOANNA: The draw this year is somewhat tempered by fans not being able to attend games but that we are in the mix at all is a real delight.

I’ll jump on the Dortmund bandwagon as well here as I think the entertainment factor would be too great to pass up, although I don’t know about my heart rate.

But seeing as though we’ve faced Porto each time we’ve made the Champions League final under Klopp I wouldn’t pass up on meeting our ‘lucky charm’ once more.