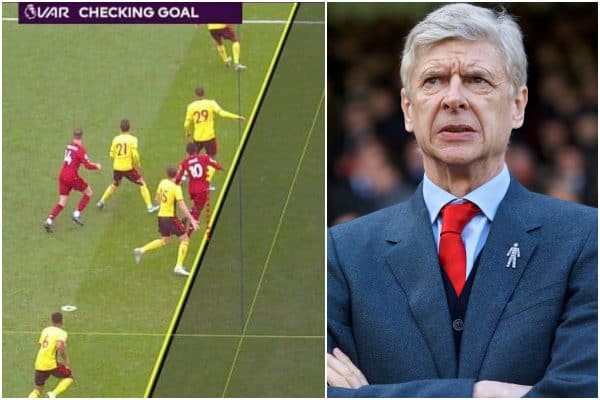 Football’s lawmakers say they would be “happy” for VARs to stop using lines to make marginal offside calls – if television companies were prepared to do the same.

The advent of VAR has meant that marginal decisions can be made more accurately on what is one of the game’s objective, factual laws.

However, overlaying lines to spot a stray toe or armpit in an offside position has been criticised as being against the spirit of the game, along with the delays to the flow of the matches created by such checks.

Asked whether VARs should just use the naked eye or different camera angles to spot clear and obvious offside errors, the International Football Association Board’s technical director David Elleray said: “If you were to tell the TV companies that they could not use the offside lines, then we would be happy for the VAR not to use the offside line.

“But to suggest that the VAR just does offside by his own eyes, that will be contradicted almost immediately, when it’s wrong, by TV.

“We even had a situation where one team challenged the line drawn by the VAR because they had a slightly different camera and drew a different VAR line, so with technology, once you begin to introduce it, it won’t be perfect but it’s difficult to retreat from it.

“I think everybody expects the lines [to be drawn now], and wherever you draw the line there will be marginal decisions, because it’s a decision of fact.”

The IFAB is looking at two key innovations on offside – a change to the law and new technology to detect offside.

Former Arsenal manager Arsene Wenger has proposed that a player should be onside if any part of their body that can legally score a goal is level with the second-last defender.

“We have to be open to new ideas and if we can make football more attacking and passionate, we have to look into that.”

Football Association chief executive Mark Bullingham said the proposal would be the subject of an experiment in lower-league Chinese football, and that the FA would only consider its own trial based on a successful outcome.

“It’s worth trialling but it’s unclear without doing a trial whether that would lead to more entertainment because you could also see a scenario where teams play more defensively and hang back,” he said.

“I don’t think there’s a correlation between goals and entertainment and I’m not even sure that a change like that would lead to more goals, but that’s why you do trials.”

Semi-automated offside technology was trialled at the recent Club World Cup and Infantino said he could not exclude the possibility of it being used at next year’s World Cup in Qatar.

Bullingham felt that it may take longer than that to fully test but was very enthusiastic about it.

“It would be a real step forward because the fan experience is negatively impacted by having to wait for the confirmation that a goal has been scored,” he said.

“If you had a scenario where an instant decision could be made that didn’t need to be referred, that would be a step forward.”

The IFAB also said the offside law would be updated to confirm that the Law 12 definition of handball, whereby the arm ends at the bottom of the armpit, must be used when judging whether a player is in an offside position.