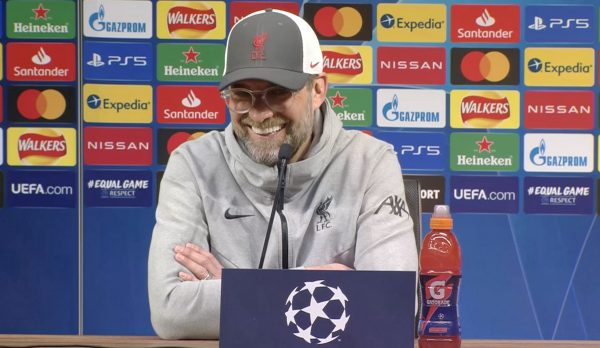 Jurgen Klopp was “very happy” as his side emerged as 2-0 victors on the night against Leipzig, cementing their place in the last eight of the Champions League.

The Reds clicked ‘Control C’ and ‘Control V’ on their time in Budapest, with their second leg outing follow a similar script to the first with Mo Salah and Sadio Mane finding the net.

With Leipzig unable to breakthrough Liverpool’s defence, a place in the last eight of the Champions League now awaits Klopp’s men.

It was a much-improved performance from the team and an ideal breather from the troubles of Premier League football, with another contest now to look forward to on the continent.

After the match, the manager was full of praise for members of his side after controlling proceedings but conceded it was a “summary of our season” after a host of missed chances.

“[The result] will help [to build momentum] but we know Monday at Wolves is a different game,” Klopp told reporters. “But if we play as good as we played tonight then we will be tough for them.

“The whole game was a summary of our season. We are good, we create chances but we don’t finish them off often enough.”

“What a boy he is, what a player he is,” Klopp said of Nat Phillips after his European bow. “What a night it is for him. Absolutely great.

“The concentration level he shows, week in and week out, is incredible. He’s doing the right things at the right moment.

“In the air, a monster, but football-wise not bad. I couldn’t be happier for someone than I am for Nat in this moment as it was a great game.”

Klopp touched on his hope for the season being that Fabinho had readily occupied the No. 6 role and the hopes of progressing as far as possible in the Champions League.

With a red-eye back to Liverpool now on the agenda, Klopp’s men will have four days to prepare for their final league clash, at Wolves on Monday, prior to a three-week break to conclude the month of March.