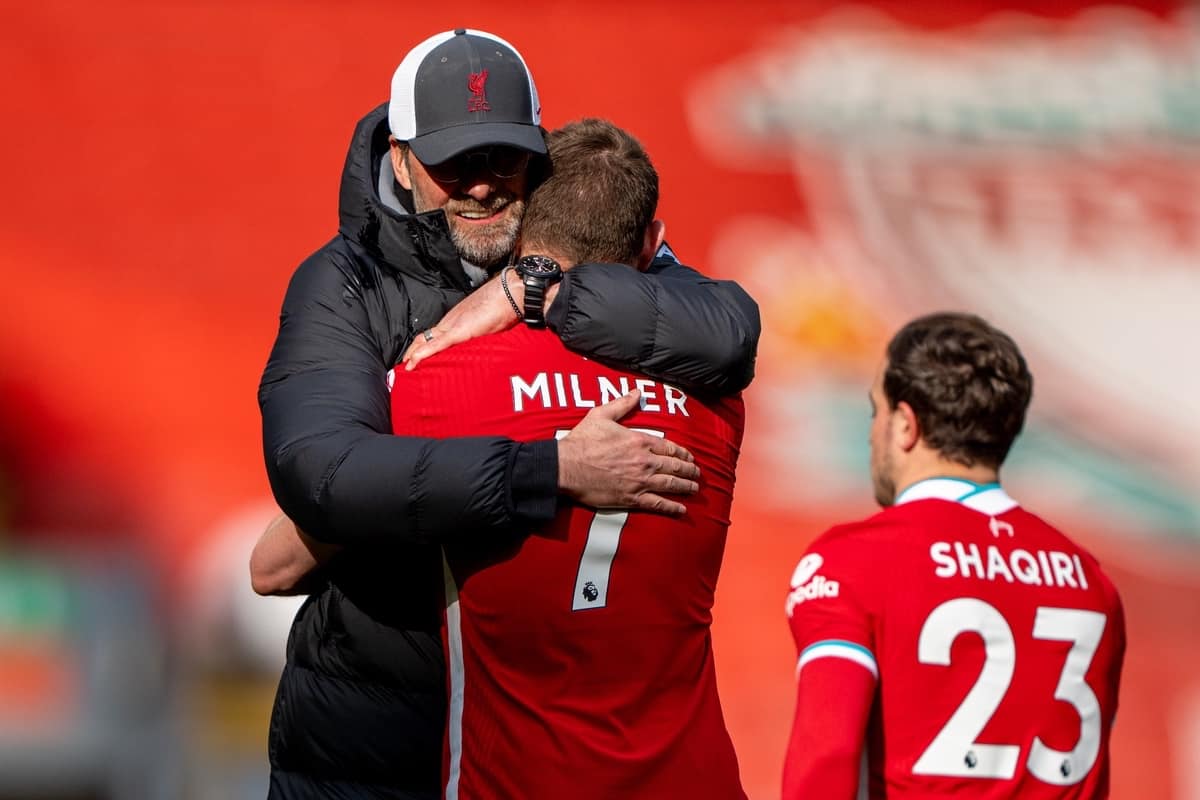 Jurgen Klopp has hailed James Milner as “massively important” in the absence of Liverpool’s other leaders, hinting that the vice-captain could keep his starting place.

Milner has enjoyed something of a resurgence of late, starting three of the last four games having gone the previous two months without consecutive starts.

The 35-year-old impressed against Arsenal and Real Madrid, doing so when the likes of Naby Keita, Thiago and Alex Oxlade-Chamberlain have struggled to exert their influence.

Despite his age, Milner has shown no signs of flagging fitness when on the pitch – albeit with injury problems becoming more common – and he still has a year left on his contract at the end of the season.

There have been rumblings of a potential move away, possibly to rejoin boyhood club Leeds, but ahead of Liverpool’s clash at Elland Road on Monday, the manager lavished praise on his No. 7, underlining his importance as a player.

“Massively important. Very, very important,” he said, when asked about Milner’s role as a leader.

“He played very good and I think we won the games because he was on the pitch, not despite it. I’m very sure about that.

“I think Milly was always around, playing or coming on when he was fit.

“There were some really little issues, but enough of an issue to rule him out, in the last month, but now he’s completely fit.

“Hopefully, it stays like this and it makes him, then, an important player on and off the pitch. That’s good, and I’m really happy to have him.”

Though Jordan Henderson remains out, with doubts over his involvement before the end of the season, Klopp still has a number of options to call upon in midfield.

Beyond Milner, Keita, and Oxlade-Chamberlain, there are first-choice starters Fabinho and Gini Wijnaldum and further squad players Curtis Jones and Xherdan Shaqiri.

But that the veteran has been trusted with a regular run of late shows the manager’s faith above other, perhaps more attractive, options and Klopp’s words suggest that he could retain his place.

Monday night brings Milner’s first-ever trip to Elland Road as an opposition player, but there will be no concerns over the emotion of the tie getting the better of him.

And it is this professionalism that makes him so invaluable.