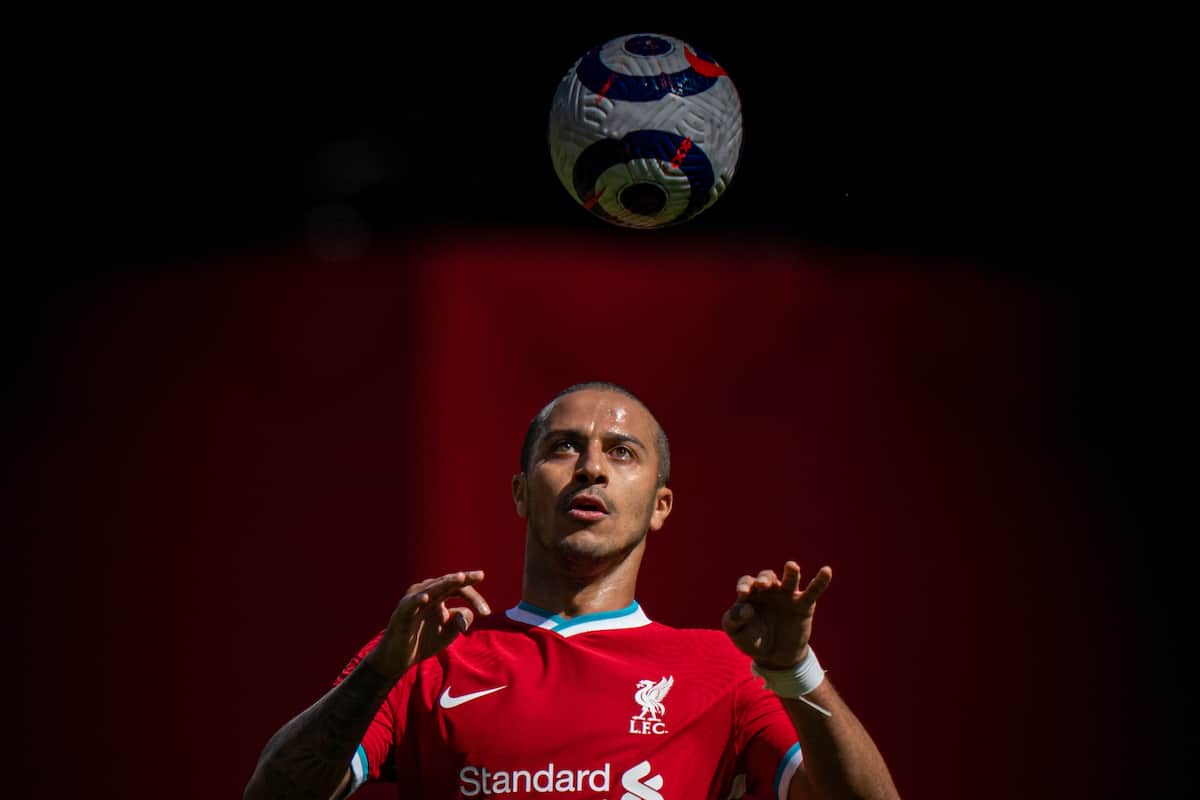 Fans have moved to defend Thiago after his lack of assists for Liverpool was used to criticise his impact, with many pointing out that the final pass isn’t really his job.

It would be wrong to argue that Thiago‘s first season with the Reds has been anything close to a resounding success.

Since swapping Bayern Munich for Liverpool in a deal worth £25 million, the Spaniard has made 25 appearances, of which only 10 have seen him end on the winning side.

Overall, the Reds have suffered in 2020/21, and with injury and illness plaguing his start to life on Merseyside, that is certainly true of their No. 6.

Despite a humbling 1-1 draw to Newcastle on Saturday, Thiago produced one of his best performances for the club, with his withdrawal in the 76th minute pointed to as the catalyst for a collapse.

He was the only player to break the 100-pass mark, finding his man with 90.1 percent and creating two chances, while also completing a game-high six tackles.

Thiago‘s incisive pass through for Mohamed Salah to lay off to Diogo Jota was one of the moves of the afternoon, and deserved to end in a second goal for the Reds and effectively kill off the game.

But in the aftermath, BBC Sport’s chief football writer Phil McNulty pointed to a statistic courtesy of the Telegraph‘s Chris Bascombe to criticise Thiago‘s “impact (or lack of)”:

Telling stat illustrating Thiago's impact (or lack of) since signing for Liverpool in this piece by @_ChrisBascombe He has made 1,320 Premier League passes & no assists. https://t.co/9uctQflh9x

It is true, of course, that Thiago is yet to register his first assist for Liverpool, but he is not exactly a player renowned for teeing up goals for his team-mates.

Rather, Thiago is a midfielder who dictates play to allow those further forward to find dangerous openings – which explains why only six players (10+ appearances) average more passes per 90 in the Premier League than his 84.4.

McNulty’s criticism was rightly flagged by Liverpool supporters and even those of other clubs:

He provided two assists for Bayern in the whole of last season. Not sure that's a particularly useful metric to judge his influence by.

Thiago is still Liverpool's most creative midfielder this season though, just ahead of Jones. Also tops the league for progressive passes. When it comes to Liverpool's problems this season Thiago's quite far down a long list.

If you're gonna point to Thiago lack of assists you haven't watched him play his entire career. That's not what he does. He sets tempo and keeps the ball moving quickly to those who get forward. However at least 1 assist should be expected by now.

Did you ever watch Thiago play for Bayern Phil?

How many assists does Fabinho make?

What about McTominay, Kante, Rodri?

Thiago had three assists in total as Bayern won the treble last season.

Judging him on assists would be like judging how many times Lewis Hamilton used his indicators during a Grand Prix. https://t.co/4FsNHKFe6b

Perhaps the most pertinent responses in defence of Thiago came in highlighting that even if Liverpool had Kevin De Bruyne in the side they would still need those up front to finish their chances:

I'm not entirely sure he was signed for his assists. However, even if he was, it is a flawed metric to judge a player on given it relies on a team-mate converting an opportunity. https://t.co/YiQsA5U5aw

He's creating a decent number of chances with his passing. A lot of it down to poor finishing from his teammates. pic.twitter.com/Dxl31YdYJr

When you use stats in a mind-bogglingly poor fashion….

Our striker can’t hit a barn door with a banjo. I’m not *entirely* sure that’s down to a lack of impact from Thiago. Is he supposed to put it on the line for them, grab their foot and swing it into the ball? Goodness me. https://t.co/dWHyA9RYfZ

You seen the finishing ?

Liverpool have the worst conversion rate in the league at home, the no assists thing cant be helped when players are missing chance after chance!

Perhaps, given he arrived at Liverpool as a proven world-class midfielder, Thiago should be held to higher standards than others.

But the 30-year-old has become a lazy scapegoat for a side with obvious issues all over the pitch, with those most recently emerging in attack, with wasteful finishing the issue against both Leeds and Newcastle last week.

For a player coming into an unsettled side, sidelined for months through injury, it has been an understandably difficult season for Thiago – to lambast him for failing to assist misses the point entirely.