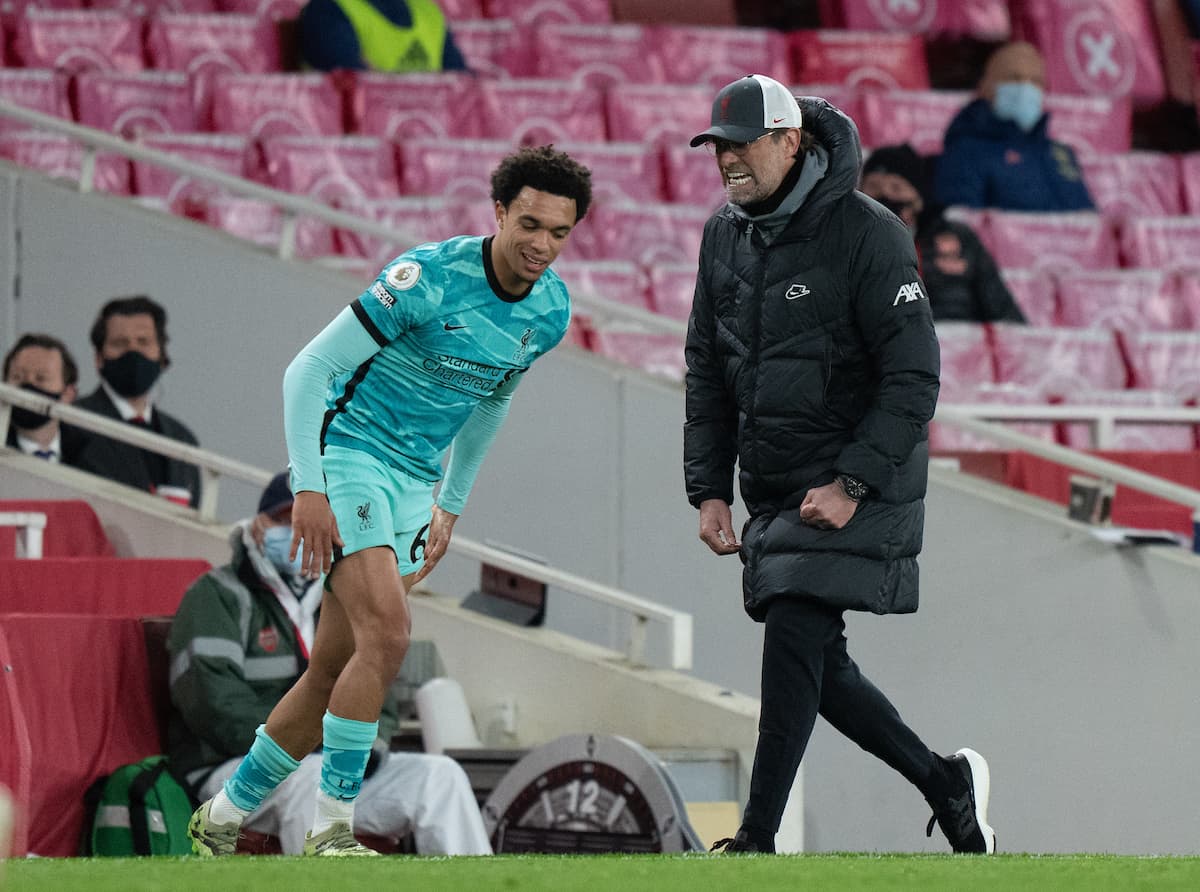 There were plenty of reasons to smile for Liverpool as they celebrated their 3-0 win over Arsenal on Saturday, with this now their third win and clean sheet in a row.

After a 19-day break, Jurgen Klopp’s men returned to action in the best possible way, with a dominant performance reaping its rewards as three points returned to Merseyside.

It may have taken until the 64th minute for the Reds’ authority to be marked on the scoresheet, but there only ever looked to be one victor.

And Diogo Jota was the man to bookend the scoring, first with another headed goal before a close-range finish, with Mohamed Salah sandwiched in between as he finished off a sumptuous move through the legs of Bernd Leno.

The performance and result saw Liverpool pick up from where they left off in March, with this only the third time this season that Klopp’s men have won three or more games in succession.

And it could not have come at a better time with the top four race heating up and a two-legged tie quarter-final tie with Real Madrid on the horizon. 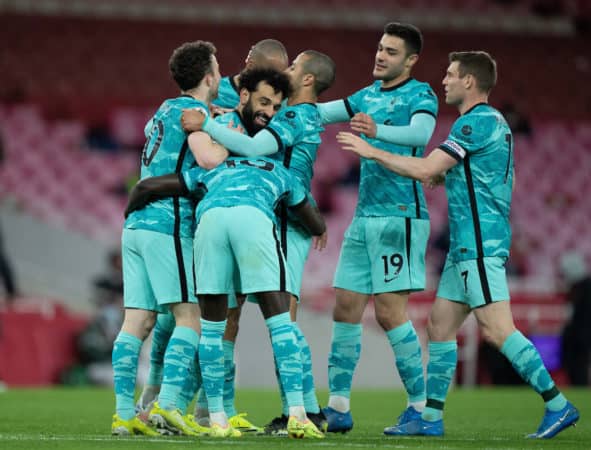 For Ozan Kabak, the trip to the Emirates provided another welcomed clean sheet alongside Nat Phillips in what is an ever-evolving partnership.

It’s been a whirlwind for the Turk since he arrived at Anfield in January and when speaking to LFCTV he touched on how he is already savouring the next test that awaits in the Spanish capital:

“We played very well, we dominated the game. In the first half, we gave everything in the tackles and challenges and second half we found the goals.

“With Nat, every day we know each other better and better and now we have three clean sheets in a row – I hope we will keep it up, in the Madrid games too!

“I can’t describe my feelings [for the Madrid game]. Everything’s come so quick so I’m so happy I’m playing for this huge club and every game and every second I’ve been here I try to do my best and help the team.”

The man of the moment once more in Jota was similarly buoyed by the resounding victory after it moved the Reds within two points of Chelsea in fourth spot.

And Liverpool’s No. 20, who netted his 12th goal of the season, echoed the eagerness to continue the winning run both domestically and in the Champions League:

“Very important [result]. I said after the last game, to think about higher spots in the table we need to do our job [which] is to win every single game until the end.

“Everyone is working hard and well and now we have that hard game against Real and we want to do that as well.”

With an impressive win under their belt, Klopp’s men wasted no time in taking to social media to celebrate their success and look ahead to their next test in two day’s time.

It was a victory underpinned by an impressive team performance, something Thiago, Jota and Rhys Williams were quick to laud as Arsenal were unable to lay a glove on the Reds:

It was a case of reiterating the Reds’ intent to fight to make fans “happy and proud” for Kabak, while Milner was full of praise for Trent Alexander-Arnold and a “great team performance”:

After coming off the bench on the night, Gini Wijnaldum wished supporters a “Happy Easter” as Liverpool returned from their break with the perfect result:

And eyes were already cast to the test which now lay in wait in Madrid for Trent, Rbbo and Fabinho, with all three eager to make it four wins on the bounce:

There’s no underestimating how important the victory at the Emirates was for Liverpool for both their top-four hopes and momentum heading into the last eight of the Champions League.

Confidence cannot be underestimated and after a gruelling campaign, Klopp’s men are finally finding their feet at the right time and they’ll be eager to show as much on Tuesday when they face off against Real Madrid.