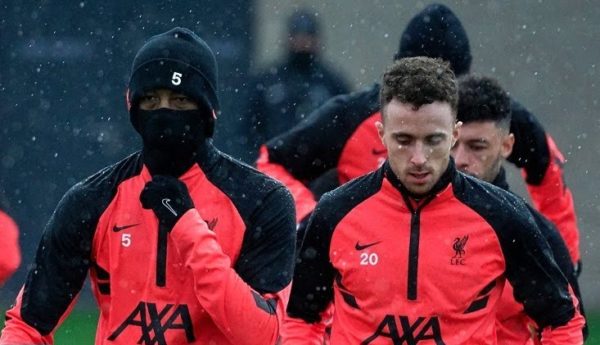 No new injuries as Liverpool train ahead of Real Madrid

Liverpool were put through their paces on Monday afternoon in preparation for their trip to Real Madrid, with Jurgen Klopp overseeing a 23-man squad in training.

Klopp’s men are to make the trek to the Spanish capital in search of a positive result in the first leg of their Champions League quarter-final tie on Tuesday evening.

The Reds head into the clash with a spring in their step after the 3-0 win at Arsenal, their third in a row, and, thankfully, face no fresh injury concerns.

It ensured the manager was able to cast his eye over a 23-man cohort at Kirkby on Monday before they board the plane to finalise their preparations for the all-important clash.

The luxury of choice has not been very forthcoming for Klopp throughout 2020/21 to date, but he has decisions to make in midfield and in the forward line for this one.

Fabinho remains a shoo-in to occupy the No. 6 role, while Thiago is now an integral member of the XI which leaves the likes of Gini Wijnaldum, Curtis Jones, Naby Keita and James Milner, who braved the Kirkby wind in shorts, vying for a midfield role.

All were present in training on a crisp Monday afternoon, in addition to Alex Oxlade-Chamberlain and Xherdan Shaqiri who Klopp both noted were “in a really good moment” after the win at Arsenal.

But a shift to a 4-2-3-1 formation could see Liverpool turn to any one of those players from the bench instead of from the off.

A four-pronged attack would see Sadio Mane, Mohamed Salah, Roberto Firmino and Diogo Jota all handed a place in the XI, with a fast start and impact on the scoreboard the desired result.

Having the quartet fit and firing for the final stretch of the season will be vital for any hopes Liverpool have of finishing the campaign with silverware and that they would start together would be a statement of intent.

And after a tumultuous time at the back, the defence now picks itself with Alisson, Trent Alexander-Arnold, Nat Phillips, Ozan Kabak and Andy Robertson all available.

Youngsters Leighton Clarkson and Jake Cain were similarly present at Kirkby after their dramatic 3-2 win with the under-23s on Sunday, but Divock Origi and Jordan Henderson remained sidelined.

Liverpool squad in training ahead of Real Madrid