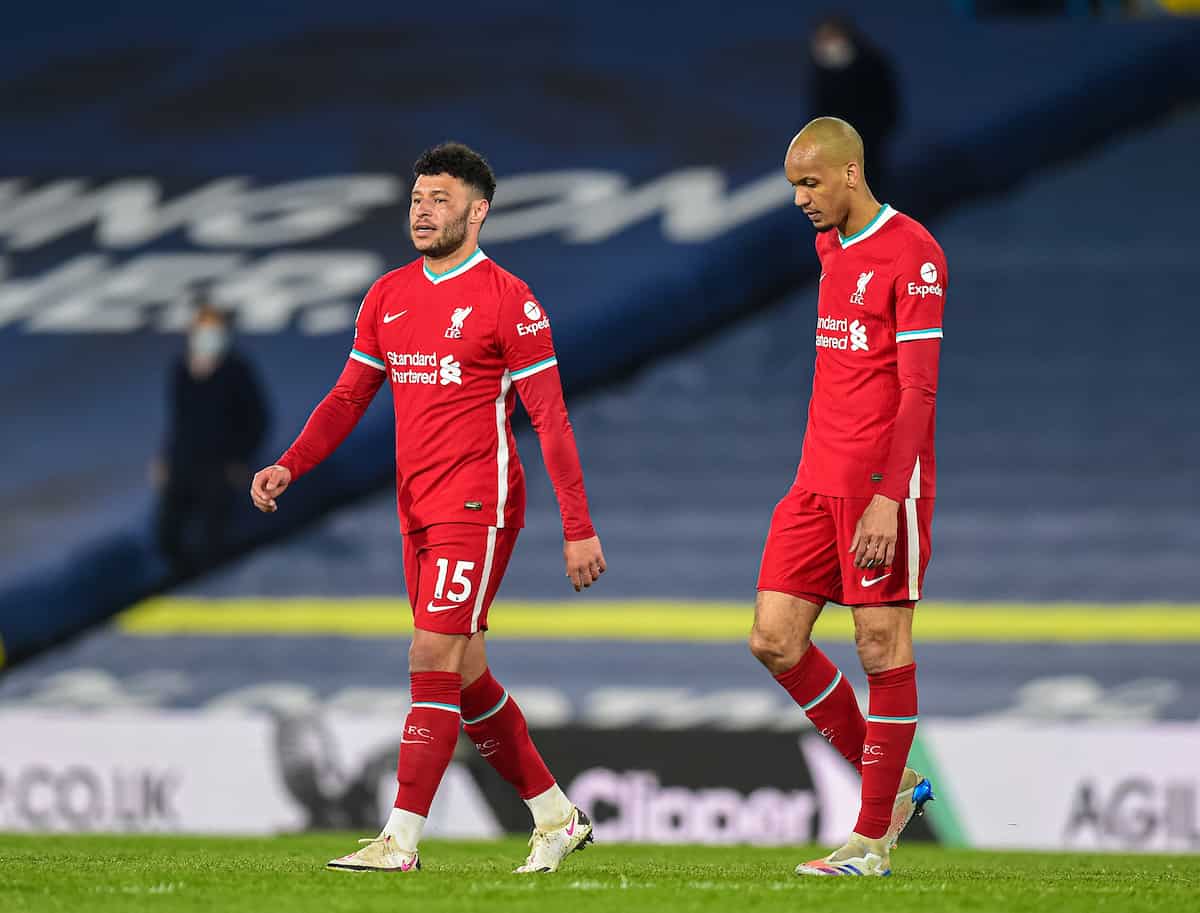 Liverpool players returned to on-pitch matters at Leeds and failed to pick up the points required to show their Super dominance over mere Premier League mortals.

“Earn it on the pitch”

A challenge to the Reds, a message to the 12?

This game, in ‘normal’ circumstances, was a must-win one for Liverpool. A clear game plan, a strong line-up, a big showing on the pitch – all that would have been anticipated by the fans and demanded after the whistle went, to send the Reds into fourth.

Keeping, in short, our hopes of Champions League football alive for next season.

Earning it, if we stay there.

Fast-forward to ESL-era matches and this Monday night encounter is a non-event, as important as bothering to pick up a piece of mail off the floor in the morning, or not.

Yes, you might watch, might want the Reds to win it regardless. But actually matter? Have a tangible impact on the season? Nope.

And with that comes a real difficulty in finding tempo, rhythm, form. They won’t perform and be motivated just because – there has to be a reason.

As there was on this occasion, for now at least. 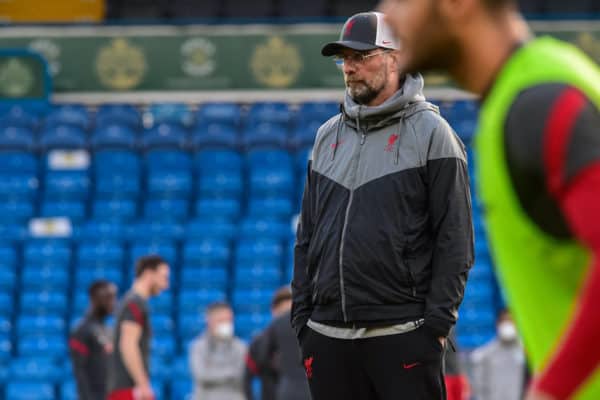 Let’s not take on the arrogance that a dozen clubs have decided to, and assume we know exactly what everyone else is thinking or wanting.

There will, no doubt, be some out there who like the idea of the Super League or think the Reds are taking the right approach.

But the polls, the social media comments, the supporter groups’ statements and the general, widespread backlash certainly points to an overriding feeling of anywhere between antipathy and outright anger.

So how did you watch tonight’s game? Did you even tune in? What was the prevailing atmosphere in your WhatsApp groups, your social circles, your family room? Did you celebrate as you usually would when Mane broke the deadlock?

There’s a fair chance that at least some of the above involved different answers to usual, an indication of the immediate disconnect that the Super League discussions have created for some.

More will be in evidence back at Anfield, with the flags absent from the Kop.

Someone good at Photoshop get an image together, quick: Mo, Sadio and Bob superimposed on Gerard Butler and the gang.

Mane’s finish into an empty net brought to an end his strange and unwanted goal drought, but also brought up a milestone for the iconic front three: a haul of 300 strikes for the Reds between them.

Salah leads the way of course, with 122. Firmino, the longest-serving of the trio, has 84. And Mane, this strike included, reaches 94.

Other parts of the team have, of course, contributed enormously to this side becoming an all-conquering one.

But that attack has been the envy, and the fear, of Europe for several seasons. It’s a tremendous collective milestone and serves a reminder to Diogo Jota and any future faces as to the standards they have to continually reach. 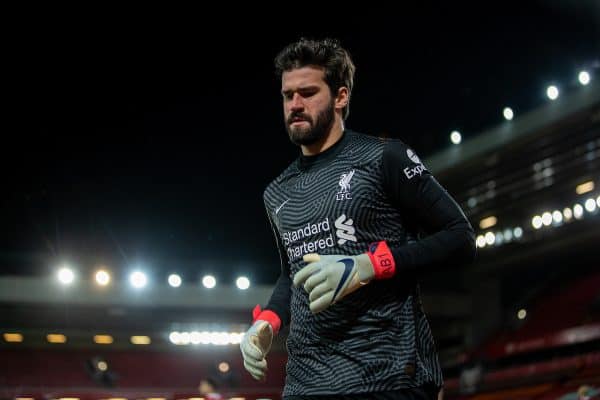 Having had a poor run of form of late and certainly a few goals conceded which he might have been expected to do better with, Alisson Becker deserves acclaim for his showing on the night.

Compare his accomplished and reliable display with the erratic and error-strewn showing at the other end from the much-vaunted and rated-by-many Illan Meslier.

A first-half block to deny Patrick Bamford was good, a near-post save from Tyler Roberts’ close-range, drilled effort in the second half was even better.

In between there were a handful of other decent interventions, some good distribution and some fine aerial work, all indicating our Brazilian’s return to form – with nothing he could do about Leeds‘ goal.

If any player had a more than valid reason for a downturn in on-pitch fortunes, it is of course the tragic case of our No. 1. So for on- and off-pitch reasons, we’re hopeful that a recent improvement suggests his mindset is better and his talent is flourishing once more.

And then there were six left.

The sole point earned on the night after the late equaliser leaves the Reds still in sixth, two points behind West Ham in fourth.

It remains a challenge to hunt down the Hammers and either Leicester or Chelsea, but this result lessens the chance of it happening.

And herein is the other reason behind the news and the decision, which has had greed most frequently labelled as the primary driving force: it’s cowardice.

Sporting cowardice from those clubs – not the players, not the coaches, but the upper reaches of the clubs – who can’t stand to think that their own poor decisions might prevent them from succeeding domestically and earning the riches of continental competition.

This year at least (so far), the Reds will have to do it the old-fashioned way.