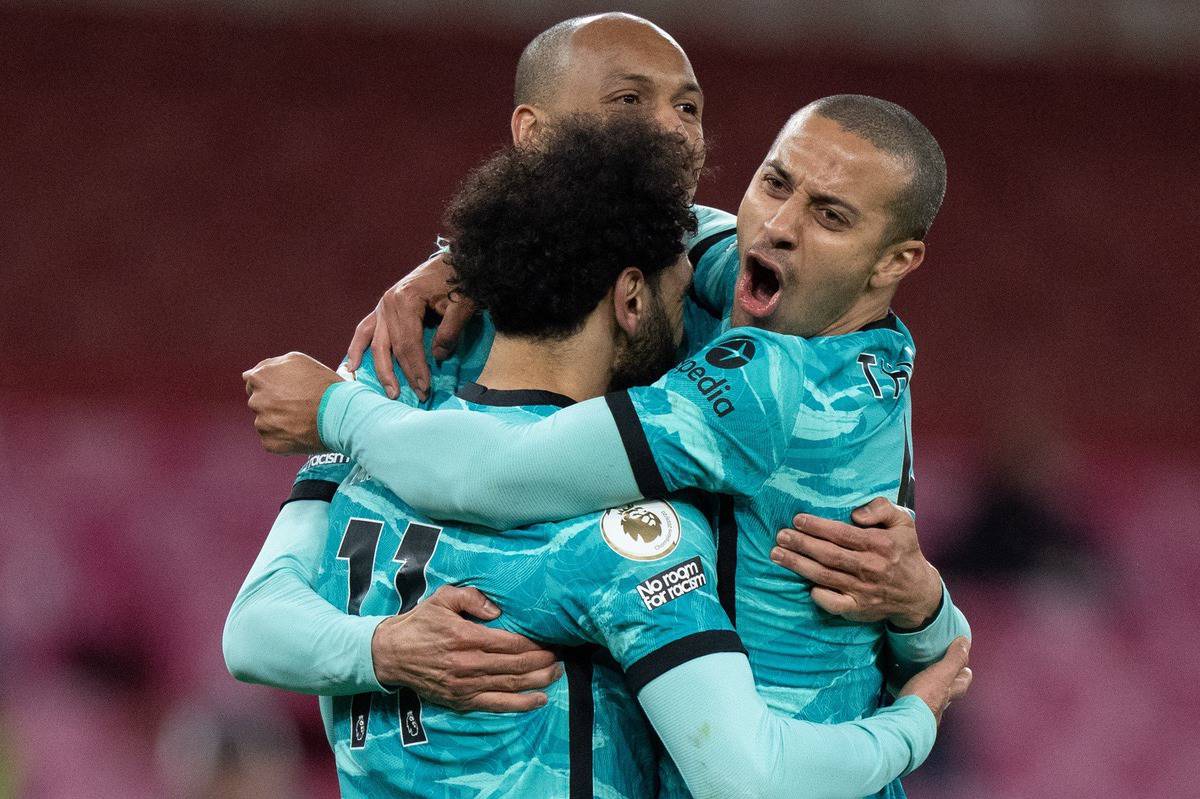 Liverpool earned a 3-0 win at Arsenal on Saturday night, allowing fans to dream of a top-four finish and build confidence ahead of Tuesday’s trip to Real Madrid.

With both Chelsea and Leicester slipping up earlier in the day, the Reds needed a big performance to reassert themselves as top-four hopefuls.

A difficult first half eventually made way for a bloodbath, prompted by the introduction of Diogo Jota, who scored either side of a Mohamed Salah strike to secure a 3-0 victory.

The three points put Liverpool just two behind fourth-placed Chelsea, and with Madrid to come in midweek, three wins on the bounce puts them in a strong position.

Here’s how supporters saw the Reds’ triumph in north London on Twitter, Facebook and the comments section.

A big win, and dreams of a top-four finish are revived…

Absolutely flawless performance there. One of the best this season.

#LFC simply had to win to open up the top four race and they’ve done it emphatically.

A month or so ago, it looked impossible. You wouldn’t bet against them now.

2 points behind Chelsea with 8 games to go

I think we will be alright…

A valuable win in the top four race but also for momentum. That’s 3 wins in a row now for only the third time this season.
Last time we had such a run was back in November, where it was 5.

Mad that we might get top 4 and are still in the Champions League.

Trent’s England omission was on the mind…

Southgate isn’t right in the head.

Best RB in the league.

This young #lfc right-back Alexander-Arnold looks good. Constantly involved, intelligent positioning, defending well and putting in some great crosses to Milner, Salah and now Jota who scores. Maybe worth a look for #eng.

How do you not pick Alexander-Arnold? Disgraceful from Southgate.

The only way this wonderful Trent Alexander-Arnold performance could be more of a statement to Gareth Southgate would be if he did a post-match interview on Sky saying "you just try and drop me again you fucking Burton waistcoat dickhead."

Diogo Jota came on and turned the bloody heat up ?

Diogo Jota, what a player, instant cutting edge to the team with him on. #LFC

Jota is gonna be a superstar.

Diogo Jota, what a player, instant cutting edge to the team with him on. #LFC

Diogo Jota has now scored 8 Premier League goals this season, making him Liverpool’s second top scorer in the competition. This is despite him starting just 8 games.

An impressive start to his LFC career. ? pic.twitter.com/TiyBUDSC7N

And attentions can now turn to Madrid…

Real confident look about LFC today. Strong press early. Good defensively. And a different dimension to attack when Jota came on. On to Madrid ??????

3-0 away at Arsenal is a right result for the Reds and completely deserved. Take that momentum to Madrid and we’re in business #ARSLIV #LFC

4 matches together and 4 clean sheets…No mercy Real Madrid, just wait for us. pic.twitter.com/cUs2l5Yqcv

Fantastic performance from the reds
Fabinho, Thiago, Jota and Trent the brightest of the bunch with Trent playing like he needs to prove a point
2 points from top 4 with 8 games to go

Bring on Real Madrid
Up the reds. Onwards and upwards#LFC#ARSLIV