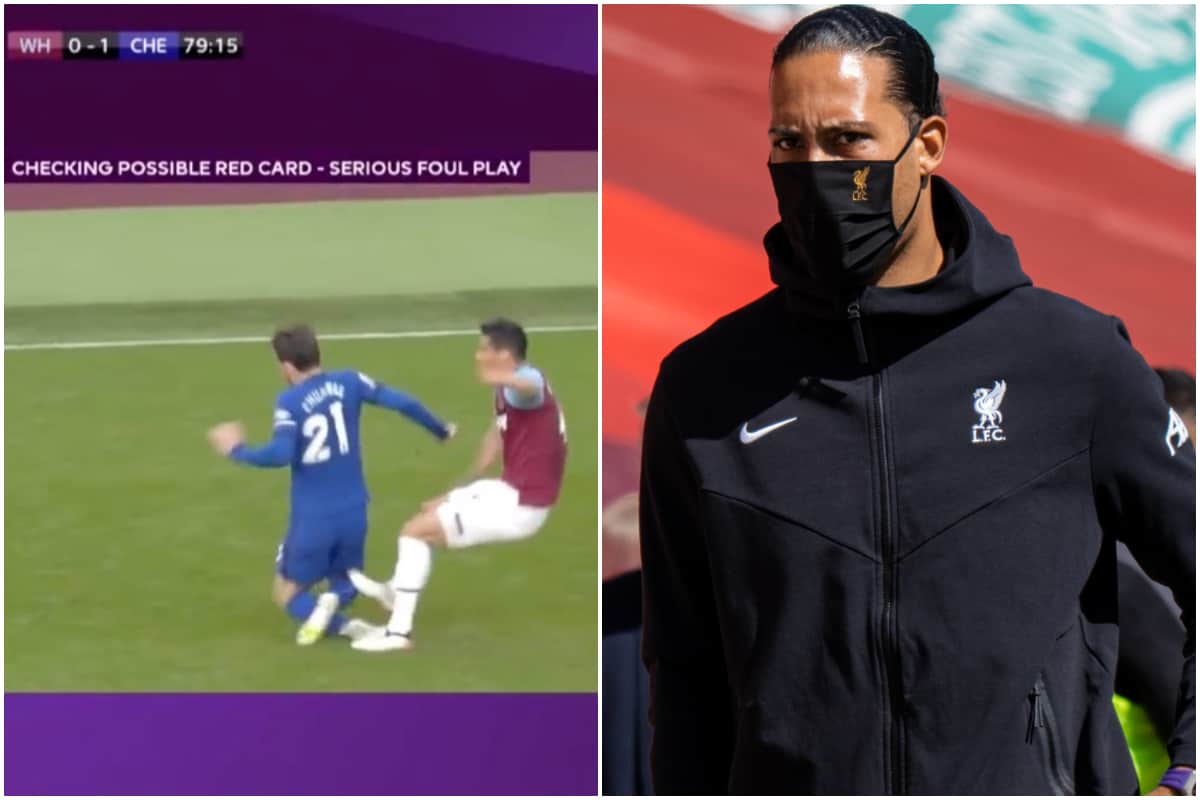 Virgil van Dijk is clearly not a fan of VAR, and the latest shocker in the Premier League this weekend has underlined why its admirers are growing fewer and fewer.

The use of VAR in the Premier League leaves a lot to be desired, and those within the game are becoming increasingly impatient with the technology.

While the biggest controversy surrounding VAR is its implementation for marginal offside calls, Saturday brought two decisions that highlight other areas of concern.

In Liverpool’s 1-1 draw with Newcastle, Callum Wilson was denied an equaliser after the ball was adjudged to have struck his arm – despite it being clearly accidental and unavoidable.

And hours later, West Ham defender Fabian Balbuena was shown a red card after he made a clearance and inadvertently collided with the leg of Chelsea‘s Ben Chilwell on the follow-through.

Fabian Balbuena is sent off by referee Chris Kavanagh after he caught Ben Chilwell with his follow through. What do you make of the decision?

VAR instructed referee Chris Kavanagh to rewatch the incident on the pitchside monitor, and Balbuena was subsequently sent off for ‘serious foul play’ despite there blatantly being none whatsoever.

“I can only say it’s someone who’s never played the game who’s made the decision,” West Ham boss David Moyes told BBC Sport after the game, which ended in a 1-0 loss.

“For me the big thing is it’s a really rank, rotten decision and it shouldn’t be given.”

Moyes, of course, could be accused of bias, but the call was roundly criticised from those outside of West Ham, too, including ex-players, commentators and journalists:

Balbuena sent off at West Ham after referee consults replays. I don't get this one. Balbuena clears the ball and his follow through means his foot connects with Chilwell's calf. Effectively been sent off for kicking the ball. Which is a new one, even this season.

Here I go again. If that’s a red then ‘the game has gone’ Oh my? it’s beyond a joke. Where is Balbuena suppose to put his leg? In his pocket? Levitate? Somebody please tell me

Rio Ferdinand went as far as to insist: “VAR needs to be put in the bin now.”

“We’ve tried it and it’s shit. Get rid,” he wrote on Twitter. “It’s slowing the game down and sucking the emotion out of the game.”

Van Dijk agreed with the former Man United and West Ham centre-back, ‘liking’ the tweet as he joins the likes of Jordan Henderson and Mohamed Salah is making his dislike of VAR clear. 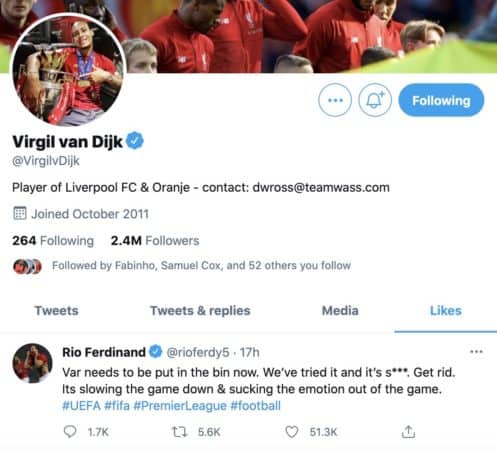 Speaking in his post-match press conference, Jurgen Klopp described the decision to overturn Wilson’s goal as “the first time we were lucky with VAR,” lamenting that Liverpool “didn’t even take that present.”

In the aftermath of the campaign against the Super League, Burnley‘s Ben Mee lauded the influence of the Premier League captains, led by Henderson, in urging necessary change.

“The captains are willing to put rivalries aside and speak to one another, something that I do not think would have happened before last year,” Mee wrote in the Guardian.

“We like to think we have made a positive impact with this and our money-raising for the NHS, and hopefully we can continue to do so on a wide range of topics for the better of the game and society.”

There are certainly bigger issues to tackle, including a stand against racism and online abuse, but perhaps the players should be consulted on the use of VAR in the future, too.