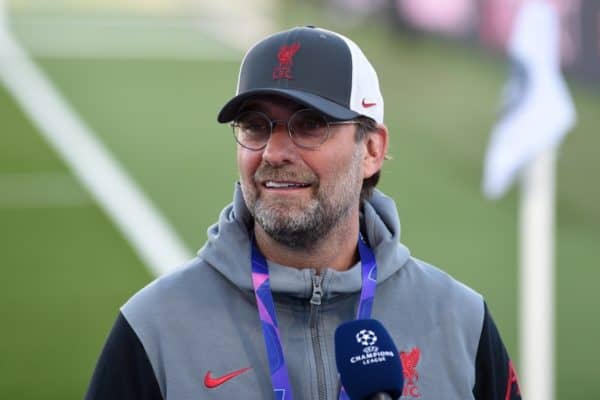 Jurgen Klopp did not shy away from the fact that Liverpool “didn’t deserve to win” against Real Madrid, but feels there is still a chance to overturn the 3-1 loss at Anfield.

It was a night to forget for Liverpool as their passiveness on and off the ball, primarily in the first half, was duly punished by Real Madrid.

Klopp’s men struggled to find their targets or any time on the ball and saw Vinicius Jr and Marco Asensio both find the net before Mohamed Salah grabbed a valuable away goal in the second.

And just as an equaliser looked to be on the cards, another bout of sloppiness in defence restored the two-goal buffer and ensures Liverpool have a mountain to climb at Anfield.

“There is still a chance but we have to play much better football in the second leg. We can be much more uncomfortable to play against and that’s what we have to make sure of next week.

“It will be completely different. Watch the Barcelona game back and 80 percent was down to the atmosphere in the stadium. But we will give it a proper try.

“If you want to go to the semi-finals, you have to deserve it with the performance. Tonight we were not good enough, but the only good news is there is another game.”

And on the early substitution of Naby Keita after just 42 minutes, Klopp admitted it was for tactical reasons but that he did not want to make it a headline.

“Naby was not responsible for the performance in the first half,” he added. “He was not good in the game, but I could have made a few more changes in that moment.

“I did it, and now I’m not happy about it because we talk as if it was Naby’s fault.”

The Reds will now need to regroup for the visit of Aston Villa on Saturday before the second leg against Real Madrid on the following Wednesday. It’s a big week ahead for Liverpool.