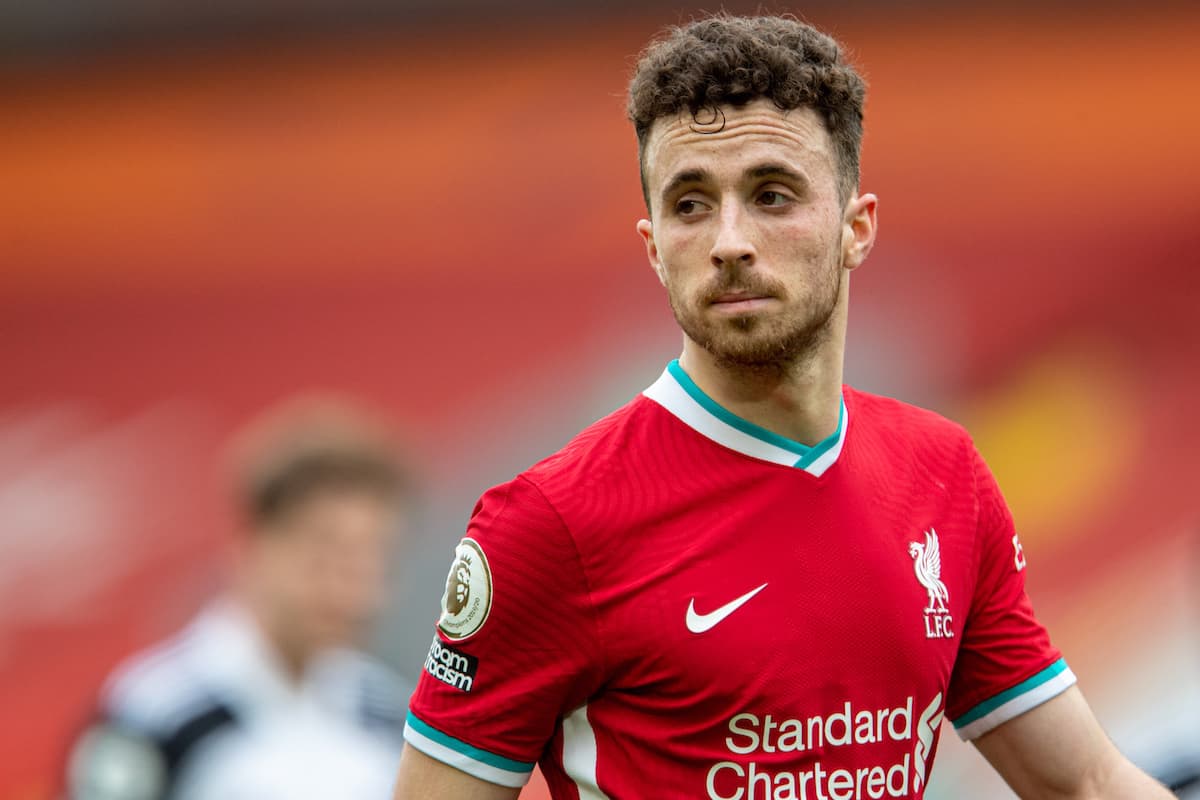 In a season full of injuries, Liverpool have been dealt yet another ahead of the final week of the campaign with Diogo Jota to play no further part.

The debut campaign for the Reds’ new No. 20 is to come to a premature end, Jurgen Klopp confirmed on Sunday, after he sustained a foot injury in the win over Man United.

The trip to Old Trafford signalled his 29th outing for the club and his opener, which set Liverpool on course for victory, was his 13th in all competitions.

But his withdrawal after 74 minutes on Thursday would later see him ruled out for the season after a challenge with United’s Eric Bailly left him with a foot injury.

And with only seven days remaining in 2020/21, there will not be enough time for Jota to recover and as such he will miss the Reds’ crucial final three games.

“No good thing without a bad thing – so, we won at Manchester United but Diogo got something with the bone,” the manager told Sky Sports ahead of kickoff at the Hawthorns.

“Not too serious but serious enough to end the season. That’s it.”

Klopp’s men know victories over West Brom, Burnley and Crystal Palace will guarantee their place in the top four and see Champions League football remain at Anfield next season.

But they will be lacking another goal threat to get there, with Jota now joining Virgil van Dijk, Joe Gomez, Joel Matip, Jordan Henderson, Ozan Kabak and Naby Keita as players to be out for the final stages.

But there is hope that both James Milner and Alex Oxlade-Chamberlain will be back for the trip to Burnley in midweek, four days prior to the season finale in front of 10,000 fans at Anfield.

“Oxlade is not in the squad, was ill a few days. We decided not to take him here just to give him now another session today that he is ready for Wednesday,” the manager added.

“Millie hopefully could be ready for Wednesday. We take what we get.”

With Klopp stating that Jota’s injury is not too serious, it suggests he is still in line to feature for Portugal in the Euros at the start of June.

But the injury is indicative of Liverpool’s season and would certainly see a top-four status ranked as an incredible achievement if they do get over the line.