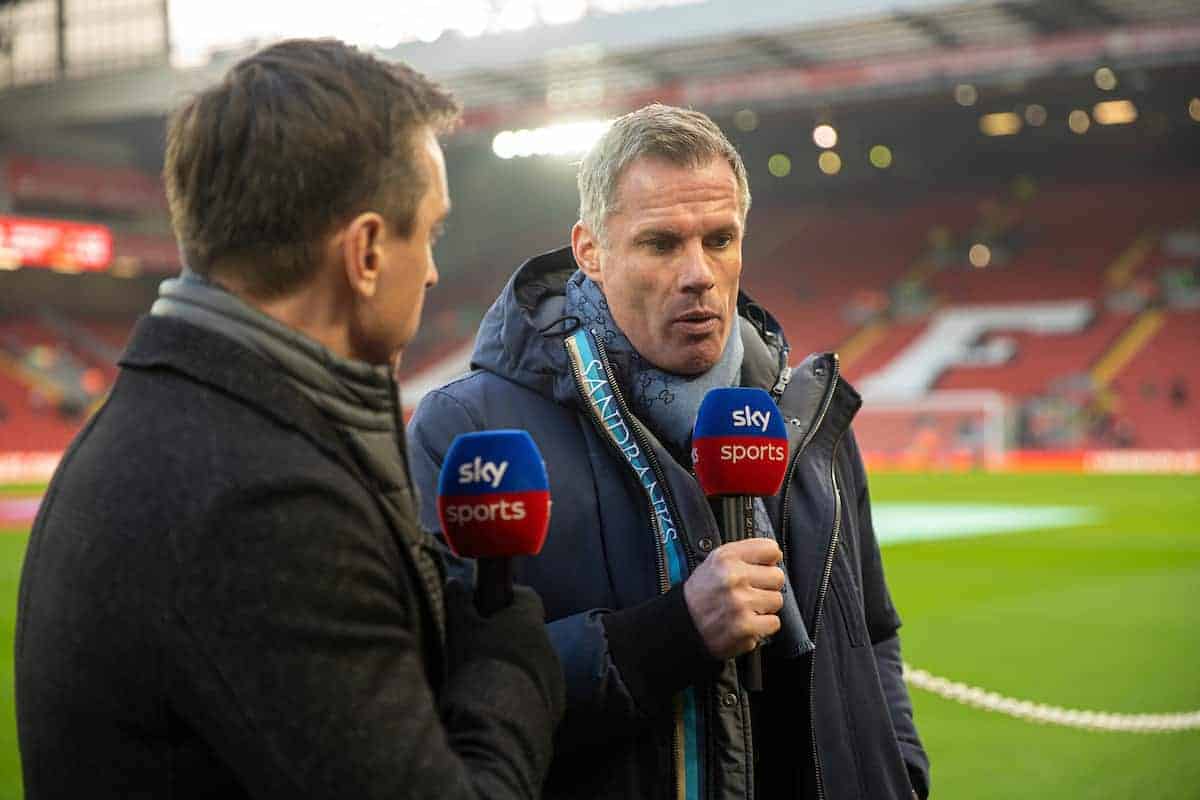 Jamie Carragher has backed Man United supporters’ protests over the ownership of their club, after Sunday’s match against Liverpool was postponed.

An estimated 10,000 fans protested at Old Trafford, with some forcing their way onto the pitch, while hundreds more blocked the streets surrounding the Man United team hotel.

It meant that, eventually, the match was postponed – with a new date, at the time of writing, yet to be announced.

United fans were protesting the Glazer family’s ownership of the club after the Super League fiasco a fortnight ago proved to be their tipping point.

And while some headlines will be dominated by violent scenes, Carragher has rightly pointed out that such idiocy will always infiltrate any protest.

“There will always be idiots, but I actually think what the United supporters have done today is a good thing in protesting and being not happy about what’s going on at the club,” Carragher said on Sky Sports.

“There will always be one or two people who take it a step too far. There’s always someone who does something stupid. That shouldn’t be what dominates the news.

“It’s not about scoring points. I’m behind protesting about what’s not right at your football club. We’ve lost a game of football today, but we have to accept that.

“What the Glazers have done to the club over the last 10 or 15 years, the fans aren’t happy. They should always be able to protest and in the main the supporters did so in the right way.”

Liverpool fans should know too well how the actions of a minority can be what the media seize upon, with the instance of the Man City team bus and Real Madrid team bus at Anfield being recent examples.

Meanwhile, Gary Neville said the Glazers should do “the honourable thing” and sell up.

“This is a consequence of the Manchester United owners’ actions two weeks ago,” the former United defender said. “There is a general distrust and dislike of the owners, but they weren’t protesting two or three weeks ago.

“The Glazer family are struggling to meet the financial requirements at this club and the fans are saying that their time is up.

“My view is quite simply that they’re going to make a fortune if they sell the club and, if they were to put it up for sale now, I think the time would be right, and it would be the honourable thing to do.

“There’s huge discontent, not just across Manchester United fans, but I think for football fans up and down the country and I think they are just saying enough is enough.

“The Glazer family have been resilient and stubborn for many, many years. I think they are struggling to meet the financial demands that this club needs and have done for some time.”

“Beyond today, it should be about reform and regulation and making sure they can’t do it again,” he added.

“Protesting is the right of every single person in this country. However, beyond today, it’s about making sure fans across the country unite to make sure that there is reform in English football. That’s the most important thing.

“Today will be a waste of time if there isn’t reform in English football.”