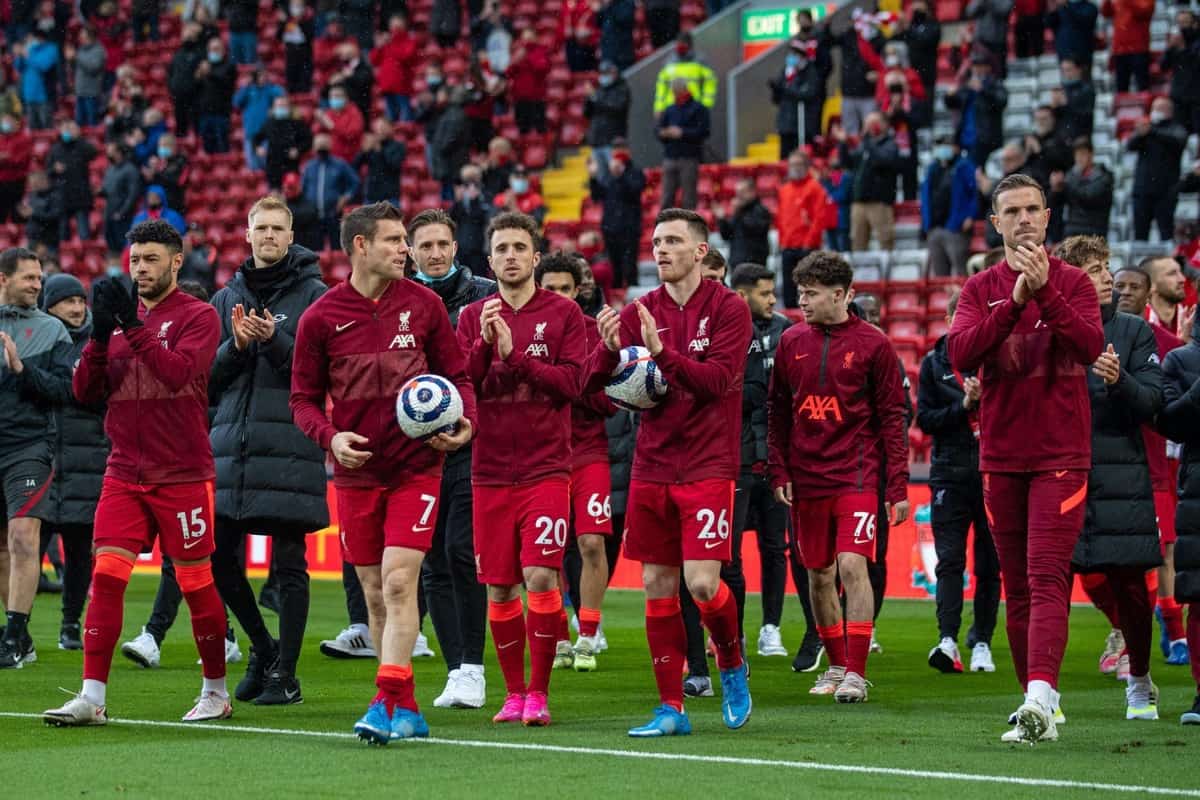 After the relief of Liverpool’s third-placed finish in the Premier League, Trent Alexander-Arnold has vowed that “next year we’re coming back for trophies.”

The Reds overcame a miserable campaign of injuries to eventually finish above Chelsea and Leicester in third, having produced a 10-game unbeaten run to end the season.

Five wins in a row sealed the perfect climax, with Sadio Mane scoring twice to put Crystal Palace to the sword on the final day.

It is a stark contrast to the previous term’s title win, but Jurgen Klopp and his players will relish their achievement having battled against the odds to finish only five points behind second-placed Man United.

Next season should be a different matter entirely, with the injured likes of Virgil van Dijk, Jordan Henderson, Joe Gomez and Joel Matip to return, and this is clearly the belief within the squad.

Alexander-Arnold led the rallying cry on social media, with Liverpool eyeing silverware in 2021/22, pushed on by the return of supporters to Anfield and beyond:

Next year we’re coming back for trophies. Thank you for the support til the very end Reds. We always find a way. ??? pic.twitter.com/lAWDr8FDIv

We finished the season with some positives and hopefully we can build on that for the next one ! Feels great to have the fans back ??
Have a good summer reds #YNWA pic.twitter.com/tDT0meDHlp

Tough year, strange times but we NEVER quit! Next year we will be back for it all?

Until next season REDS…?? pic.twitter.com/DoJNDENfd4

It has been a very strange year, and we have missed you a lot, but @LFC will fight for another @ChampionsLeague next year! #YNWA ??? pic.twitter.com/wVgRkxbZ7A

Happy to close the season this way, with a win, seeing Anfield like that and with our goal achieved. We'll be back soon! ??? #YNWA pic.twitter.com/8d6wxjhZf6

Well done to the boys today! A tough season for so many reasons but the team showed true strength of character. Back in the @ChampionsLeague next season. See you soon, I can’t wait! ? pic.twitter.com/HZ3gbAIyyA

Not the season we hoped for but we’ve finished on a strong note, qualified for next season’s Champions League and shown the togetherness and resilience which will see us right for next season. Thanks to all our fans for their support we hope to see a lot more of you next season. pic.twitter.com/3nZHvW0EP3

Good job team ?? We are where we belong #ucl @LFC @ChampionsLeague https://t.co/ES4jqRcXSs

With 10,000 supporters roaring the Reds onto victory on Sunday, it gave a glimpse of the impact a full Anfield can have on Klopp’s side, and it was not overlooked.

The hope will be that Liverpool’s home will be back to capacity by the time the new campaign starts, with James Milner, Thiago and Andy Robertson among those to recognise its importance:

Great end to the season and amazing to have the fans back at Anfield. But sad to say goodbye to special people who have been a huge part of our club ? #YNWA pic.twitter.com/eTvtsC2iq8

Strange season. Tough period. But we finished it in the best way possible. It was amazing to share with you this evening, Anfield. Thanks for your support. See you soon and let’s enjoy together, @LFC family. #YNWA pic.twitter.com/uHXVEx5CxT

What A Way To Finish The Season In Front Of The Fans. Thankyou For Sticking By Us Throughout It All. Glad We Could Give You All Champions League Football For Next Season???? pic.twitter.com/IoCBh8w5Rg

Firstly thank you to the fans for all your support throughout the season. It’s been a tough one and we’ve had to really dig in but we couldn’t have done it without you. We’re so glad we could play our final game in front of you. pic.twitter.com/Gpp5Qqlkrf

All our successes are because of you! ??? #YNWA pic.twitter.com/WFmjh8b2Qd

It could be a changed Liverpool side that takes to the field next season, with Gini Wijnaldum already confirmed to be departing and no doubt needing a replacement.

But their objectives will remain the same, and after a short break for the summer, Klopp can start to plot an assault on the Premier League and Champions League once again.