Ole Gunnar Solskjaer looks set to prioritise Man United‘s meeting with Liverpool over the visit of Leicester on Tuesday, admitting that he could turn to his youngsters.

The United manager has been faced with a conundrum following the postponement of the Reds’ trip to Old Trafford a week ago, finding himself in the middle of a run of five games in eight days.

Two of those could have major ramifications on the top-four race, with Leicester to come on Tuesday before Liverpool’s belated arrival in Manchester on Thursday.

Understandably, Solskjaer is planning to rotate between fixtures, and after fielding a full-strength side for Sunday’s 3-1 win at Aston Villa, he expects to ring the changes against Leicester.

This would, in turn, suggest he will revert to his first-choice side to play Liverpool.

“I wish I could have said that we’d go all out in these games, but it’s impossible,” he said in his pre-match press conference, as relayed by the Guardian.

“I know that if I play the same team on Tuesday and Thursday, I run too much a risk of injuring them.

“We talk about integrity of the league all the time, but don’t blame me when I have to make changes. It’s not safe to keep playing them.” 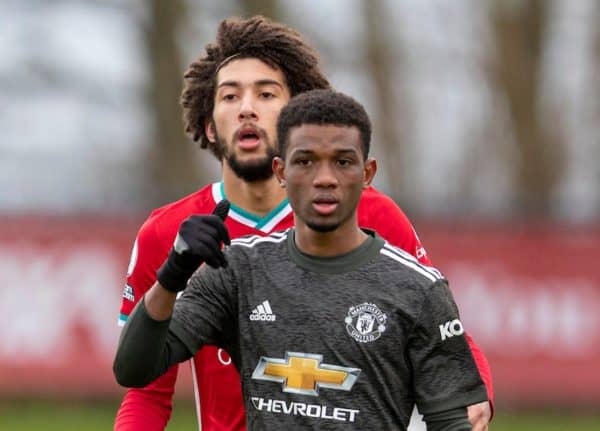 Solskjaer added that 18-year-old Amad Diallo and 17-year-old Shola Shoretire are “definitely in contention” for first Premier League starts, while it is speculated that 19-year-old Anthony Elanga could also figure.

“Some of the young boys will definitely get an appearance,” he added.

“Whether it’s starting or coming on at the end, I don’t know, because I don’t know what team we’ll pick until I see the players on Tuesday.”

Obviously the emphasis is on Tuesday at this point, but the inference is that United will opt for a weakened team against Leicester due to the way the calendar falls.

Both Leicester and Liverpool will be desperate to take three points off United as they are in direct competition for fourth spot in the Premier League, knowing a failure to win for either side could be fatal.

If the Reds win all four of their remaining games – with West Brom, Burnley and Crystal Palace to follow – and Leicester lose just one of their final three, they will pip them to next season’s Champions League.

United could have given the Foxes a boost already, though, if Solskjaer fields a less competitive team next time out.