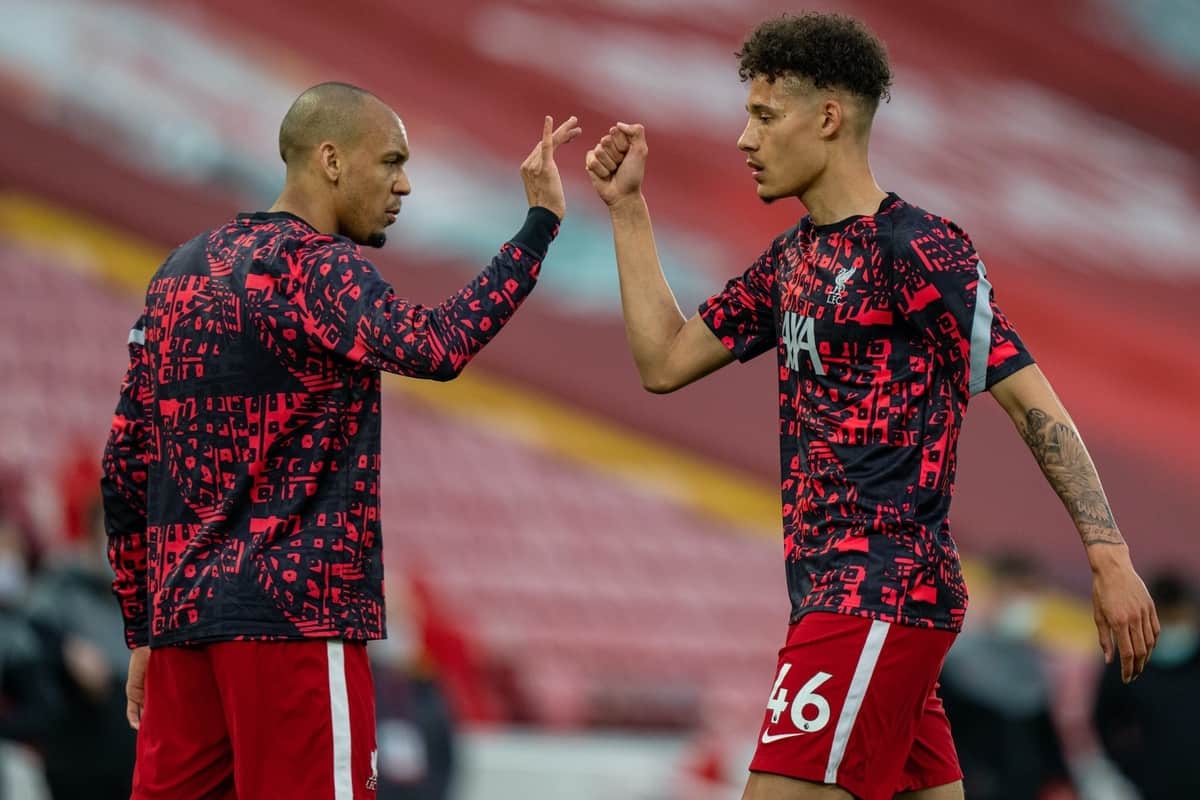 Jurgen Klopp‘s biggest call is, once again, at centre-back as he considers his lineup options for Liverpool’s must-win trip to Man United on Thursday night.

Following Leicester‘s 2-1 victory at Old Trafford on Tuesday, the Reds need to take all three points off United to ensure they remain in the hunt for a top-four place.

In fact, they will be looking for 12 points from a possible 12 in their remaining four Premier League fixtures, and will be buoyed by a 2-0 win over Southampton last time out.

Liverpool are, surprisingly, the most in-form side in the top flight at present, having taken 14 points from their last six league games, and that bodes well ahead of their journey to Manchester.

Having not won away to United since March 2014, however, it will clearly take a strong side to secure victory.

Klopp has revealed that Ozan Kabak, James Milner, Naby Keita and Ben Davies are still absent, having been struck down with muscle problems.

In Kabak’s absence, Klopp claimed he could keep faith with Rhys Williams as partner to Nat Phillips at centre-back.

“The moment when the boys show up in training, when they have the momentum in training and these kinds of things, then is a good moment for that,” he said.

“Rhys, for example, is now in a really good moment. That helps obviously.

“Who will line up, we have a session this afternoon and what this season taught us is don’t fix the lineup too early in your mind, because something could happen that you have to change!”

Divock Origi did return to training on Tuesday, following a lengthy spell out of his own, but there was no sign of Alex Oxlade-Chamberlain. 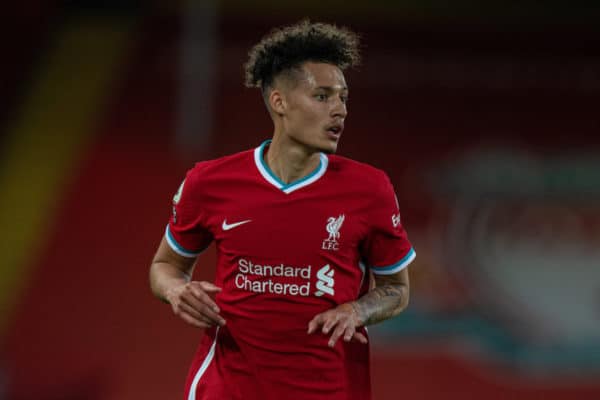 Given his suggestion that Williams could keep his place despite a step up in calibre of opposition, it is likely that Klopp could name an unchanged back five at Old Trafford.

That would see Trent Alexander-Arnold and Andy Robertson flank Phillips and Williams, while new father-of-three Alisson starts between the sticks.

This could in turn allow Fabinho to remain in the No. 6 role, and with Milner and Keita both out, Thiago and Gini Wijnaldum are poised to start again in midfield.

Klopp could make a change in attack, however, and with Diogo Jota off the pace against Southampton, Roberto Firmino could return to the side at his expense.

With Firmino leading the line along with Mohamed Salah and Sadio Mane, Liverpool would line up like this: 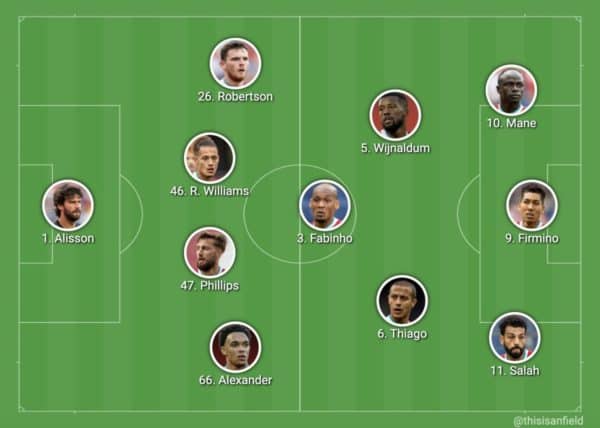 However, there is a chance that Klopp does not fully trust Williams for this game, which could see Fabinho forced back into defence.

If Fabinho does move from midfield, it may prompt the manager to turn to a 4-2-3-1 formation, with Thiago and Wijnaldum operating as a double pivot.

With Liverpool needing to secure the win at all costs, fielding all four of Salah, Firmino, Mane and Jota would not be the worst idea, and it could see the Reds take to the field like this: 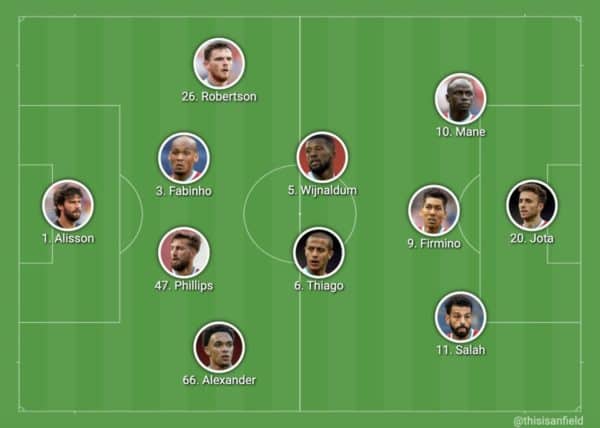 Given the venue and the opposition, Klopp is likely to remain conservative in his selection, and this would suggest Fabinho is required as protection in midfield.

This would arguably be the most sensible course of action, with consistency important as Liverpool look for a vital three points to keep their chances of a top-four finish alive.