Jordan Henderson‘s leadership qualities come as little surprise to Liverpool, but the captain was influential in more ways than one this season, in and outside of the club.

That it is noticeable when Henderson isn’t in the squad is a compliment all in its own for the skipper, who is carving out quite the legacy on Merseyside and beyond.

With injury taking its toll, the 30-year-old did a lot of work off the field as opposed to on it, and while not one to seek the spotlight he deserves a place in it.

Henderson has been a shining light for many during significant times of hardship in the last year and he’s the ideal role model for anyone and everyone.

Captain, leader and legend, Henderson continues to prove those who doubted him wrong with the qualities that endear him to many: humble, driven, selfless and relentless.

And while his time on the pitch was limited in 2020/21, he showed all of those aforementioned traits in abundance. 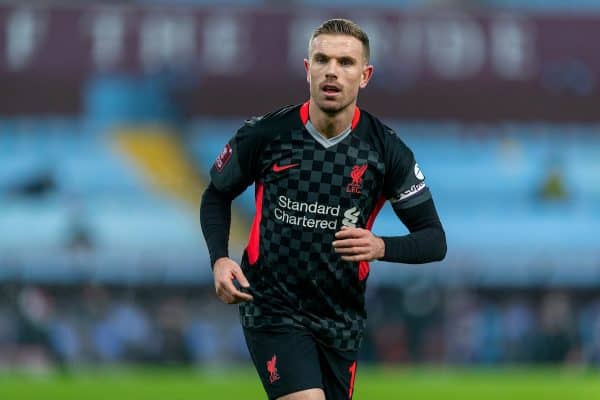 Up and then down

Like the season prior, Henderson would see his campaign cut short through injury – one which would require surgery on his groin and see him miss a total of 16 games.

It amounts to 30 percent of Liverpool’s 2020/21 season, a time when their Champions League progress was hanging in the balance and top-four appeared out of reach.

You can only imagine his frustration at having to sit back and watch it all unfold without having a direct say in proceedings.

But at the time of his injury, he was being deployed at centre-back next to Ozan Kabak in what was a key element of his campaign and one that exemplified his selfless nature.

Like Fabinho, Henderson was called upon in a great time of need when he had to hold down the fort as the Reds prepared the untried and untested Nat Phillips and Rhys Williams for the rigours of Premier League and Champions League football.

So to centre-back it was, where he played nine times with four different partners and did better than one could hope, utilising his game intelligence to his advantage.

It did not start all too smoothly at Southampton in a position that the midfielder had expressed was “difficult” and that he was “just trying to do my best,” but he navigated the challenge like a true professional and captain.

But it was in midfield where he put in his best performances of the season, notably at Everton (where he had a moment of the season contender taken from his grasp), Crystal Palace and at home to Tottenham, where you’d be hard-pressed to find a blade of grass he didn’t cover in any or eardrums he didn’t burst with his booming voice.

He averaged the highest passes in the team, 86.4 per game, and interceptions, 1.6 per game, a nod to his invaluable involvement on and off the ball.

Ultimately, that his absence in the centre of the pitch was duly noted both through injury and at centre-back surmises how important Henderson is to Jurgen Klopp‘s Liverpool.

There would be no Henderson shuffle treatment but his influence was far and wide in 2020/21.

“After a tough journey with many obstacles, everyone can see it – personality, character and ability. The complete package,” Klopp said late in 2020.

“You’re a world-class athlete and football player but you are an even better human being.”

There can be no disputes there.

From handing over his social media to fight online abuse, pushing to hold social platforms to account for said abuse, leading the league captain’s charge against the Super League and then the united response with his Liverpool teammates and showing support for the Black Lives Matter protests – Henderson did it all with grace and a deep desire to understand.

Add to that his work with NHS Charities that was instigated with his role in the ‘Players Together scheme’ throughout the pandemic and you have a man who epitomises the club’s mantra of You’ll Never Walk Alone.

And the abovementioned is only what we’ve been told, you can bet there are countless more instances of Henderson’s nature to help whomever, wherever and whenever he can.

Henderson leads by example, talks the talk and walks the walk and is not afraid to hold large corporations, the government or his employers to account and never does he seek adulation for it.

They are qualities to be admired and cherished, so here’s to you Jordan Henderson.

Hopefully, Henderson is nowhere near centre-back next season, not that he’s not cut out for it, but that it means everything is as it should be at Anfield once more.

A key component of Liverpool’s spine, the captain will reunite with Fabinho in the middle of the park and no doubt look to establish a connection with Thiago after only two outings in midfield together so far.

With goal contributions from the midfield department lacking, which is in part down to Liverpool’s style, it would be a welcome development for Henderson to add to his tally and help share the load once more.

The priority will be that he returns from the Euros fully fit and ready to join pre-season at the earliest opportunity to help the push back to silverware.

And what you can expect with 100 percent certainty is that Henderson remains the influential and inspirational captain, leader and legend that we have come to know and love.

Role next season: A key man in the middle and, hopefully, a trophy-lifter!