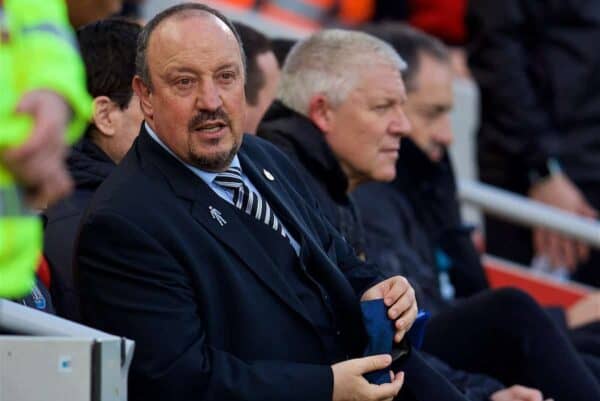 Merseyside Police are investigating a “threatening” anti-Rafael Benitez banner hung close to the Spaniard’s home on the Wirral overnight.

An image shared on social media showed a white sheet with the words ‘We know where you live. Don’t sign’ – referring to Benitez’s likely impending appointment at Everton – hung over a garden wall in the former Liverpool manager’s home village of Caldy.

“We can confirm police are investigating reports of a threatening banner at a location in Caldy today, Monday 28 June,” said a statement from Merseyside Police.

“At around 7am, it was reported that a banner made from bedsheets had been placed over a wall and bushes on a residential driveway, with wording which is thought to target football manager Rafa Benitez.”

There has been considerable opposition among some sections of Everton’s fanbase to the likelihood of Benitez becoming Carlo Ancelotti’s successor at Goodison Park.

Offensive banners have previously been put up at the stadium but this incident was close to Benitez’s home.

“This message has understandably caused some distress and worry for residents in the area,” said Detective Inspector Darren Taylor.

“Due to the football language used, we suspect that it was aimed at Rafa Benitez – but whoever placed the message left it outside the wrong house.

“If anyone has information about who produced the banner or helped to put it up, please let us know as soon as possible.”

CCTV and witness enquiries are being carried out in the area.

Benitez, who won the Champions League and FA Cup with Liverpool in 2005 and 2006, has emerged as the front-runner to replace Ancelotti, himself a three-time Champions League winner, who made a surprise return to Real Madrid four weeks ago.

Everton fans’ animosity towards the Spaniard were raised above the usual level reserved for a Reds boss ever since his “small club” jibe after a 2007 Merseyside derby, although he has since sought to clarify he was referring to their small team mentality in the game.