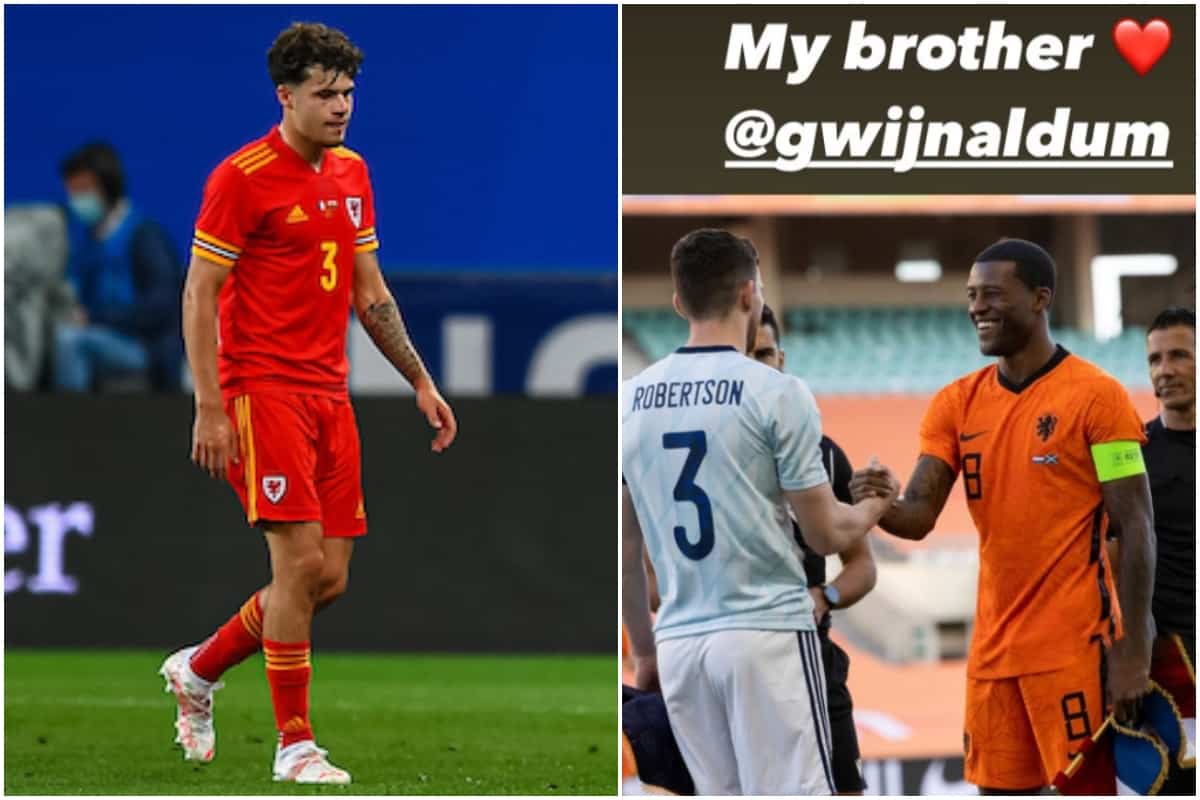 Neco Williams was handed an early dismissal for Wales in a friendly encounter, while Andy Robertson and Gini Wijnaldum met once more but as opposition.

With the wait for the Euros to get underway now in single digits, warm-ups and friendlies dominate the schedule as international managers look to get their teams firing.

But it was a crushing start to an exciting summer ahead for 20-year-old Williams, who was named in Wales’ 26-man squad, as he was given his marching orders merely 26 minutes into a match with reigning world champion France.

Starting as a left wing-back, Williams was tasked with shutting out a star-studded forward line that included Kylian Mbappe, Karim Benzema and Antoine Griezmann.

But his night would be cut short when Benzema fired a shot goalwards and from close-range Williams was adjudged to have blocked the ball with his arms that were away from his body.

A penalty was awarded, but much to the bemusement of his teammates a lengthy consultation with VAR saw referee Luis Godinho show the youngster a straight red card in a friendly.

“Neco is devastated in there. He wanted justification from the referee but he couldn’t get it,” Wales caretaker manager Robert Page said. “We’ll do everything we can to overturn it. If there is a chance to do it, we will.”

Ex-Liverpool goalkeeper Danny Ward would save Benzema’s spot-kick but France would eventually run out comfortable 3-0 victors, where Harry Wilson played the first 60 minutes.

Elsewhere, Robertson and Wijnaldum would captain their respective sides against the other in an entertaining 2-2 draw, where Virgil van Dijk was an invested onlooker.

Scotland were without a number of players due to COVID-19 guidelines, but they would come within a handful of minutes of securing a victory against the Dutch side.

Jack Hendry opened the scoring for the Scots before Wijnaldum smartly steered a header into the path of Memphis Depay for the equaliser just seven first-half minutes later.

Not to be outdone, Robertson would match his now-former Liverpool teammate in the second half as a trademark lung-bursting run up the left led to a curled cross for Kevin Nisbet to slot into the net.

But just when a memorable victory looked in the reckoning for Scotland, Depay would convert a late free-kick for his second of the night, which both Robertson and Wijnaldum watched from the bench after their withdrawals before the 70-minute mark.

The two made it known on Instagram that they were happy to see their ‘brother’, but it was not such a memorable night for Trent Alexander-Arnold.

The right-back is set for scans on a thigh injury picked up in England’s win over Austria on Wednesday, casting serious doubt over his ability to remain in the squad with the Euros starting in just eight days’ time.