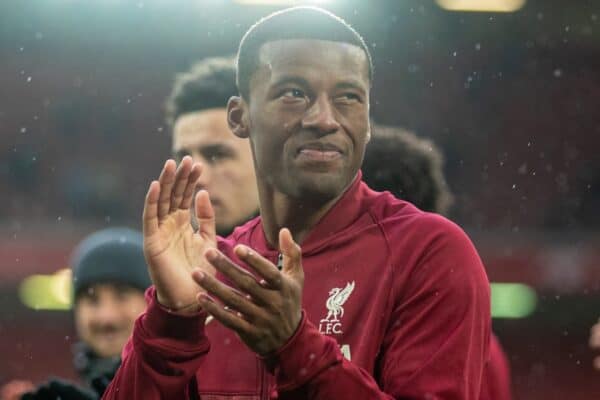 Gini Wijnaldum is set to join PSG on a free transfer this summer, and his reasons for leaving Liverpool may be made clearer by reports of his staggering wage increase.

When Wijnaldum announced his intention to leave the Reds at the end of his contract, the Dutch midfielder said “the fans deserve to know the story” of why he had opted to move on.

He suggested he would have preferred to stay with Liverpool, but it had been widely reported that the club had left an offer on the table and there was a disparity in terms of the length and value of the deal.

Wijnaldum is now expected to join PSG this week on a three-year contract, with the Ligue 1 side clinching one of the most high-profile free agents of the summer.

While a free transfer is described as such, it is still a high-cost signing when it comes to players like Wijnaldum, with signing-on and agents fees required alongside a lofty salary.

Wages are more often than not reported as before tax, which in England would have seen Wijnaldum’s new wage increase to £16.2 million a year, or £311,000 a week.

That is an astonishing increase on his previous earnings at Liverpool, which was reported upon his move from Newcastle in 2016 as worth in the region of £75,000 per week, or £3.9 million per year.

Mohamed Salah is currently the Reds’ highest earner at around £200,000 a week, which underlines the difficulty in tying down Wijnaldum given it would be impossible to justify breaking their wage structure to keep the No. 5.

Nearing 31, the midfielder can now secure a major payday into his final years as a top-level footballer, with PSG one of the only clubs capable of meeting those demands.

Barcelona are said to have pulled out of the running for Wijnaldum’s signature after PSG effectively doubled their contract offer, which highlights the lucrative situation he will find himself in at Le Parc des Princes.