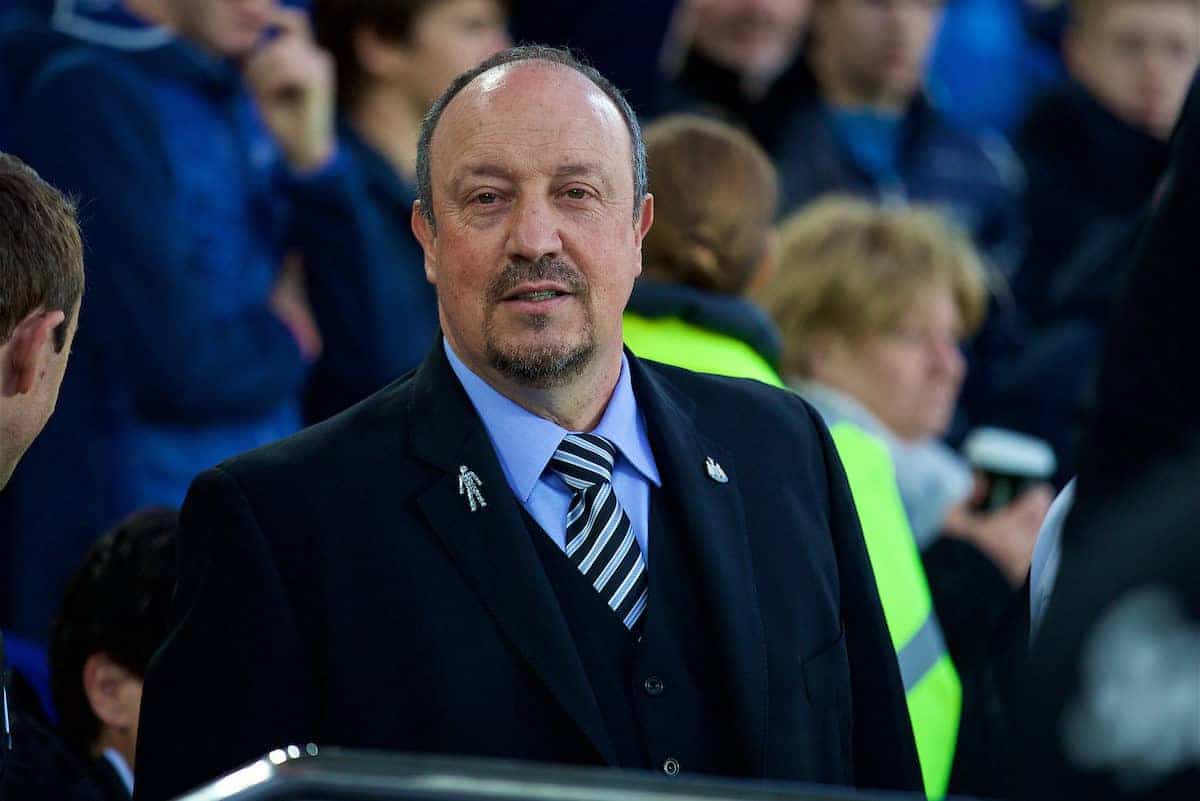 Rafa Benitez has moved a step closer to filling Everton‘s vacant managerial position in a move that has polarised both Reds and Blues.

Carlo Ancelotti left Everton this summer with all but a second glance to return to Real Madrid, leaving them to search for their fourth permanent manager in as many years.

Benitez was name-checked early on in the process and is now deemed to be in “prime position” to be offered the role after the third round of talks with the Blues’ hierarchy.

The Times, the Telegraph and the Guardian, among others, report that Benitez is “on the verge” of taking the role after it had looked as though Nuno Espirito Santo would be appointed.

With his connections to Liverpool Football Club, for some, it will prove a contentious decision on both sides of Stanley Park with the battle lines clearly drawn.

For others, enough time has passed since Benitez’s Anfield departure in 2010 and he has enough credit in the bank – either way, fans made their feelings known.

There was strong opposition to the potential move…

You can't be a Liverpool legend – as a manager – and then go on to manage them. Just doesn't happen. If you do, fair play, but you get erased. Simple as.

If and it’s a big if still that Rafa joins Everton then his flag can’t be raised at Anfield anymore by fans. Cant be raising the flag of an Evertonian manager.

They just absolutely don’t deserve Rafa. Simple as really. And it’s mad because if they could get over the ‘redshite’ side of things, they’d see very quickly he’s a man worth adoring.

Cares that much for his family, he took a long term contract in China, and went without them. I’m sure it’s convenient for him but that’s it. So is Tranmere, manage them.

But also a touch of humour as one would expect…

I hope Rafa's first job as Ev manager is to gather up all the People's Club signs and burn them in the centre circle as he explains to the press that they were an artificial construct invented by Moyes and big clubs don't need such glib sloganeering.

You know there are reds out there who have Rafa tats on their bodies ??#Rafa #LFC #bitters

Rafa loves the aggro doesn’t he? It seems like he exclusively goes to clubs with mad owners or with fans who hate his guts.

Rafa can obviously go where he wants and all the best to him. Adores Merseyside. Loves the peninsula.

Only thing he loves more than the peninsula is the beef. Absolutely loves the beef. It is amazing the amount of conflict he finds himself in the centre of.

I understand the feeling from some due to his time at #LFC… 15 years ago! But I know his connection it is now more or at least as much with the city of Liverpool than with LFC as it is run now (he has no relationship with the new owners)

Not that my opinion matters, but given what he did for Liverpool FC, and what him and Montse did for various organisations publicly and privately then Rafa will always get a pass from me

Evertonians might not welcome him, but he’d give them everything and improve them

It also goes without saying that what that man did for the people of this city (and for the Hillsborough justice campaign) means that he will always be welcome here. He is an adopted son, is Rafa. And lives on the Leisure Peninsula too, albeit in a slightly Tory bit

Benitez gave £96k to the Hillsborough Family Support Group when he left Liverpool. Actions like that far outweigh whatever club colours he wears in the dugout for me.

Benitez will be great for Everton and the club will be superb for him. It's a perfect match. He will fight EFC's cause ever bit as hard as he did for LFC and NUFC. And at Goodison he'll have sensible owners

Rafa Benitez won us the European Cup. He can manage whoever he wants, barring Man Utd. I was more annoyed when he went to Chelsea than I am that he’s going to Everton. He loves this city, he wants to live here. I’m sound with it… not that he’d be arsed if I wasn’t.

My love for Rafael Benitez is unconditional. He’s a Liverpool legend but he’s also a champion of this city. I won’t wish him well at Everton but no problem with him going there – this is his home. If they can put history aside & get behind him he’ll make them a proper team again.

Rafa Benitez is a legend and always will be, in my eyes. If he is confirmed as manager of Everton, I wish him all the best. I only ask that he loses the derby twice a year and finishes below Liverpool. All the best Rafa lad. pic.twitter.com/D7w8bKuguB