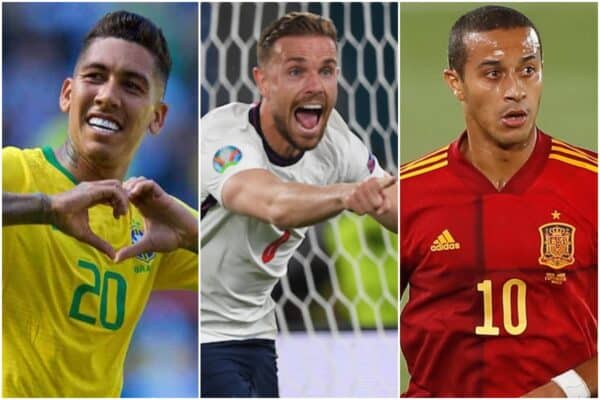 The week ahead is one with a lot on the line for five Liverpool internationals as both the Euros and Copa America reach the semi-final stage.

The Reds started the summer with 10 players competing for their respective nation with silverware on the line and they head into the final week of action with five representatives.

All of Andy Robertson, Diogo Jota, Harry Wilson, Neco Williams and Xherdan Shaqiri saw their team bow out of the Euros in progressive stages.

But with Spain overcoming Switzerland in a penalty shootout and England securing a dominant 4-0 win over Ukraine, both Thiago and Jordan Henderson have booked their place in the semi-finals of the Euros.

Their paths mean that they would only meet in the final, but will have to overcome Italy and Denmark respectively to do so.

Wembley will play host for both fixtures, with Thiago to discover his fate first with the Tuesday evening kick-off, but it is unlikely the Reds No. 6 will play a significant part.

Thiago has started on the bench in each of Spain’s five games and has amassed just 50 minutes in that time, but the silver lining will be that he should return to Kirkby feeling fresh when the time comes.

Henderson will be up next as the Three Lions host a resilient Denmark on Wednesday, where a place in only the second-ever final for England will be on the line – although the Liverpool captain may have to settle for coming off the bench once more.

While no third-fourth place playoff will take place, the duo’s presence in the final four will ensure that their return for pre-season will come no earlier than July 28 – 17 days out from the season opener at Norwich.

But before the Euro semi-finalists take their shot at the final, Alisson, Fabinho and Roberto Firmino will have had theirs with Brazil as they are to meet Peru early Tuesday morning (UK time).

A victory would secure their place in the final against either Argentina or Colombia on July 11, but a defeat would see them compete in a third-fourth playoff on July 10.

Ultimately, irrespective of their result against Peru, the Brazillian trio will be one of the last to return to pre-season as a three-week holiday at the end of Copa America would take them to August 2.

It makes for a big week ahead for the international Reds.

How to watch Liverpool’s internationals