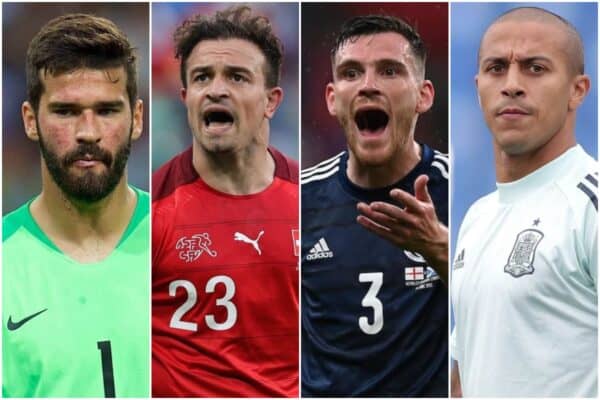 With Euro 2020 and Copa America now having crowned their champions, club football is swiftly back on the agenda. But just how many international minutes did Liverpool players accumulate this summer?

There was little downtime between the end of the 2020/21 season and the start of the international calendar, with friendlies preceding summer tournaments.

Jurgen Klopp saw 11 players originally called up to represent their nation in either Euro 2020 or Copa America, a figure that would move down to 10 following an injury to Trent Alexander-Arnold.

The right-back had nearly completed a full 90 minutes for England in their friendly against Austria before a quad injury struck, ruling him out until the start of pre-season.

While all but Robertson would see their team make it to the knockout stages, only two players would accumulate more minutes than the Scot this summer when you also factor in pre-tournament friendlies.

The left-back would see 403 minutes added to his already taxing 2020/21 season having been captain of Scotland, but it was Diogo Jota (439 mins) and Xherdan Shaqiri (507 mins) who would top the pile.

The two saw their teams make the last-16 and quarter-finals respectively, and notably, Shaqiri’s total tally for Switzerland saw him play only 312 minutes less than he did for Liverpool throughout the entirety of 2020/21.

While manager Tite readily rotated his Brazilian side, Roberto Firmino (303 mins) and Alisson (270 mins) were able to accumulate minutes on the way to a silver medal, with Fabinho not far behind on 191 minutes – but they did have the added travel to South America.

And while it was disappointing to see Thiago fail to make a starting appearance for Spain, his 126 minutes of action should allow the No. 6 to return to pre-season fresh in a few weeks’ time.

In fact, Sadio Mane, who only featured in international friendly contests like Takumi Minamino and Caoimhin Kelleher, accumulated more minutes (180) than Thiago this summer.

While more minutes in the legs will not have been ideal, that no further injuries came out of the summer alongside Alexander-Arnold will have been music to the ears of Klopp.

The international contingent who competed in summer tournaments will slowly join the rest of their teammates for pre-season following their summer break, which is to be at least three weeks in duration.