Trent Alexander-Arnold and Andy Robertson make for a deadly duo in the assist column, but it’s their direct combination with each other that is the “dream” for Pep Lijnders.

Liverpool’s full-back duo have acted as the creative hub for Jurgen Klopp and have contributed a combined 76 assists across the last four seasons – an incredible tally.

Alexander-Arnold and Robertson have shared the field 148 times and ensured the likes of Mohamed Salah, Sadio Mane and Roberto Firmino consistently add to their goal tally.

But in terms of supplying each other, only two goals have found the net through a direct full-back to full-back interaction, both scored by Robertson and assisted by Alexander-Arnold.

They both came at Anfield, the first against Salzburg and the second against Arsenal and the celebrations were worthy of what were two brilliant team goals.

And for assistant manager Pep Lijnders, it is a combination that is the “dream” route to goal, one that embodies how the modern game is played.

In his reflection of the Euros for the Athletic, Lijnders praises the use of Germany’s wing-backs, notably against Portugal, and their direct influence on the scoreboard with one another before questioning if it can regularly work with Liverpool’s back four.

“Full-back to full-back goals are a new surprise set-up in football version 2021 — we saw a few in the group stages,” Lijnders explained.

“The question is can you do it with a back four like we have at Liverpool? That’s my dream goal by the way.

“It means so much more than the goal itself. It means that the team is playing with complete determination.”

Goals between full-backs are enough to make the other team feel punch drunk such is the movement, fluidity and speed of the entire group when executed correctly and it’s no surprise that it’s a “dream” avenue to goal for the Dutchman.

It personifies what it is to be a team and how football continues to evolve, and while Robertson and Alexander-Arnold are already a fearsome double act, providing assists for the other would undoubtedly take it up a notch. 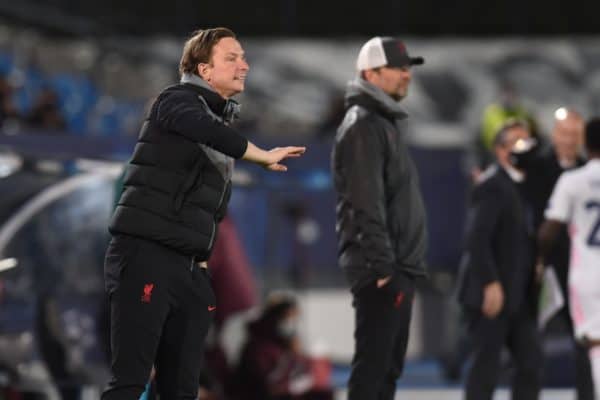 It requires initiative, game intelligence and intensity to pull of but something tells us that Robertson’s goals against Salzburg and Arsenal will not be the only times the full-backs directly combine on the scoreboard.

After all, as Lijnders recounts: “I learned from Jurgen Klopp that the better you press and the better you counter press, the more you can attack with complete freedom. Pressing makes the game more creative.”