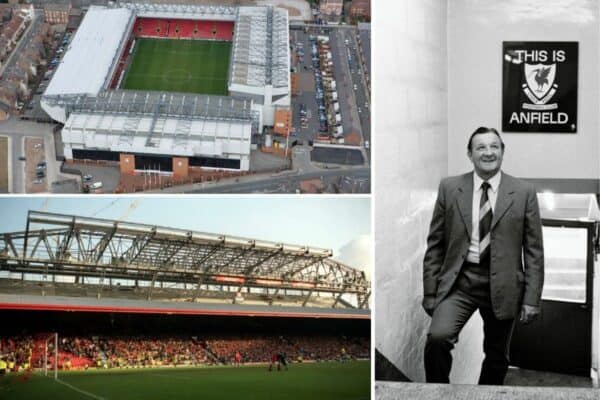 Anfield was built in 1884 but did not become Liverpool’s spiritual home until the club’s formation in 1892, and in the 129 years since it’s undergone significant changes.

The place Liverpool Football Club calls home has changed drastically over the decades, from muddy embankments to a single stand that now holds the capacity of 20,500 fans.

In the time Anfield has been called home, illustrious managers and players have plied their trade at the ground and seen 48 major honours proudly placed in the trophy cabinet.

It is a special place to millions and will continue to be for many more years to come, but here we’re taking a look back in time to see how Anfield has changed throughout the years.

And we’re starting in 1928 when a significant expansion took place on the Kop to allow for a roof and 30,000 fans to stand and watch the Reds.

Onto 1959 and Bill Shankly would arrive, a few years before Anfield would be due another makeover. And he sure made the people happy.

In 1971, Kevin Keegan would be unveiled at Anfield as a new signing and the No. 7 would later go on to say of Shankly, “A great man, a great manager and a great psychologist.”

Two years later, Shankly’s third and final league title would be held aloft at Anfield in what proved to be his penultimate season at the helm.

Further improvements at Anfield would be made between 1963 and 1973, with the Kemlyn Road stand, now known as the Sir Kenny Dalglish stand, and Main Stand both undergoing redevelopment.

The departure of Shankly saw Bob Paisley assume the top job in 1974, where a new era of illustrious success was to follow. And take a look at the old Anfield tunnel!

The This Is Anfield sign holds a special place in the club’s history and the one seen behind Paisley was the second version to take its place and remained in the old Anfield tunnel until 1998.

It would not be seen until 2012 after a third version took its place, but it’s now back where it belongs – although the tunnel has certainly changed following the Main Stand redevelopment.

The old Kemlyn Road entry, which was the boys pen for a significant length of time and a long queue was nothing out of the ordinary.

Then in 1982, the Shankly Gates came to be – they did move location following on from the Main Stand construction in 2016.

The mid to late-1980s saw trophies continue to return to Anfield, much to the delight of fans and John Barnes’s arrival.

The FA Cup final homecoming in 1989 took in the sights of Anfield. You may notice the coloured block of seats at the Anfield Road end and this was Paisley’s doing.

He watched the reserves at the ground and found the red shirts would get lost in the red seats around the stadium and felt having an array of colours would help see the players better.

In the 1991/92 season, it was time to add a second-tier onto the Kemlyn Road stand, later known as the Centenary stand – it officially opened in September 1992.

And this is what it looks like in the present day.

The Kop, of course, underwent a significant change after the Taylor Report called for football stadiums’ standing terraces to be replaced with all-seater stadiums following the tragic events at Hillsborough.

The 1993/94 campaign would be its last and the occasion was marked with an emotional send-off.

In 1997, an upper-tier would be added to the Anfield Road end in a boost to capacity.

Drastic changes would be few and far between in the following years as new stadium plans were widely discussed but no movement would occur.

But after owners FSG decided to remain at Anfield instead of building a new stadium in Stanley Park, work started on demolishing the old main stand in favour of a new three-tier stand.

Here’s how it once looked back in 2011, throughout the build process and in present day – capacity would rise to 54,000.

The current stadium dominates the skyline and will continue to do so with the new Anfield Road expansion due to be completed for the 2023/24 season.

Anfield’s capacity will rise to 61,000 and it’ll look something like this. Pretty amazing, right!

From this to this…

And this to this…

Anfield has undergone extensive changes in its 129-year history with Liverpool Football Club and as the club has grown so has its spiritual home.