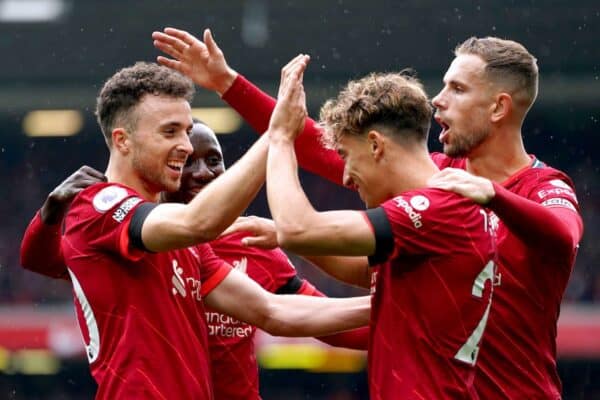 Liverpool’s return to Anfield in front of fans ended in celebrations for all and a very strong second-half performance in a 2-0 win over Burnley.

Classic Jurgen Klopp – throwing the kid in at the deep end, well before anyone expects it.

Elliott’s first Premier League start for Liverpool came against one of the most bruising and aggressive opponents too, for added surprise, but he coped largely well.

Early moments saw him fouled a few times, and caught on the ball once on the edge of his own box too, but his first touch and ability to turn away from challenges meant he didn’t look out of place at all.

He was denied an assist from a brilliant through pass by an offside flag against Mo Salah in the first half, but was frequently involved after the break and showed good work in the second goal.

There should be no concerns over future starts in big games for the 18-year-old.

Fans back at Anfield

A little over 52,000 inside the ground and they very much enjoyed it, especially in the second half.

It took all of six minutes for the fans to remind Nick Pope he was back in a stadium with home support, as he started dragging out the process of taking goal kicks, slowing the game down.

Attacking moves were that bit more electric once the crowd woke up after the break – early kickoff, remember – and a few renditions of Salah, Van Dijk and Firmino’s songs were particularly enjoyable.

After the horror show of Anfield form last year with no fans around at all, this was the total opposite. Best cheer of the afternoon? Tsimikas in the final minutes getting through three challenges in five metres.

Streaky striker! The Portuguese forward is a very good goal-grabber for the Reds, rather than being a constantly involved presence during the 90 minutes.

He’s also turning into a player who goes through great runs of form in finding the net, as opposed to one who constantly gets one or two every two or three games.

Last season he managed a run of eight goals around October and November, then managed another group of three in a couple of games post-injury.

This term he has started with two in two, plus a few in pre-season, boding well for the upcoming games. Consistency is key as ever.

Second half, the Reds stepped on the gas far more.

Salah, Mane, Jota, Van Dijk and Elliott all had openings in the first 20 minutes after the break, each either passing up the chance to shoot, teeing up a team-mate or being denied by flying Burnley bodies, blocks and saves alike.

Mane eventually found the way through, smashing an effort past Pope after one of the best moves of the match, and the impressive upturn in tempo continued thereafter.

When Liverpool up the speed of play, few teams can live with them.

Two from two and onto Chelsea

Liverpool against Chelsea will be seen as one of the title-defining clashes, though of course this particular one comes far too early for any such assertions.

It’s still a match we’ll want to be competitive in – Champions of Europe, remember – show that we’re the match of them in and at a minimum keep pace with them in the table.

One or two players coming back to fitness, Fabinho to return, Virgil back toward something like top gear, Alisson shining – a great start to the season all-round.