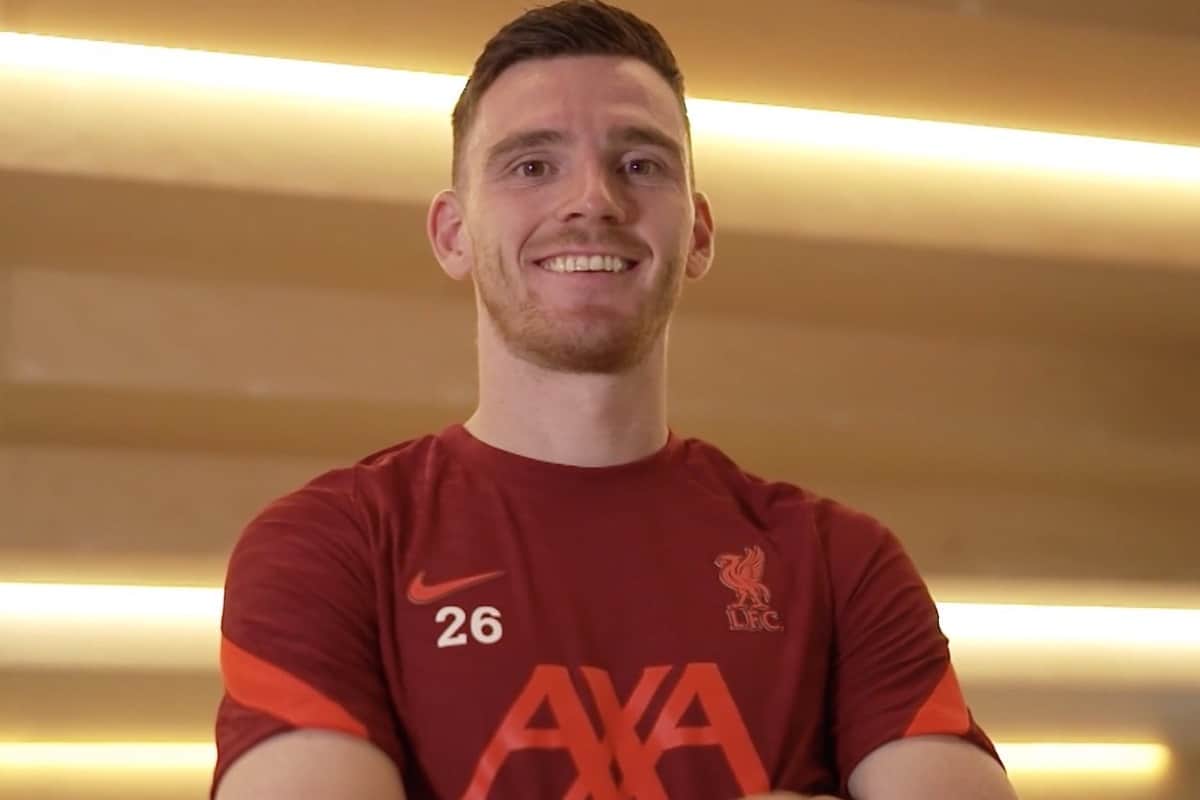 Anfield will be seeing Andy Robertson run up and down the left-flank until at least 2026 with a new contract signed, sealed and delivered, much to the delight of Reds.

Liverpool’s investment in the here and now has seen the Scot added to a list that already comprises Virgil van Dijk, Alisson, Fabinho and full-back partner Trent Alexander-Arnold.

It’s a new contract list that promises more names in the weeks and months to come as the Reds reward those who have played a key role in Liverpool’s rise under Jurgen Klopp.

And Robertson is undoubtedly a deserving figure, and his new five-year deal will take him to the age of 32 and with nine years at the club under his belt.

It exemplifies the meteoric rise he has experienced since arriving as what many would have considered an underwhelming signing at the time.

He’s far from that now and the love supporters have for him is unquestionable, shown by the reaction to his new deal.

The best goalkeeper, fullbacks and centre half in the world tied down for the future.

As much as I want new signings, I’ve grown up on us losing our best players. This is a massive step in the right direction. https://t.co/OXSE8YzHXB

We have the best Left Back in the world for another 5 years. LETSSS GOOO https://t.co/q1F6QfDPrZ

Some unbelievable contract work being done at Liverpool this summer.

Keeping hold of world-class players for many years simply didn’t used to happen.

It’s not as fun and shiny as new signings, but it’s just as important, if not more so. https://t.co/Cu5dzSAEJB

All these #LFC players committing their long term futures to the club. Must be convinced that the club is going to be in good hands for a while still.

Will go down as one of my all time favourites to pull on the shirt. https://t.co/DXv1DuiX9e

Foundations are in place at the back. It's further forward where #LFC must invest in the future #Haaland #Mbappe

Honestly, these new deals are the best business Liverpool will do this summer regardless of who they sign (if anyone). Keeping hold of your best players at their peak so they don’t need to be replaced is better than any signing.

There’s no place I’d rather be! Love it to bits here, it’s home. Thanks to everyone for the incredible support from day one until now. My focus is on working even harder so we can achieve more great memories together #YNWA pic.twitter.com/5vPrOPaLXN

It’s another welcome piece of business from Liverpool as they tie another defensive pillar down, with Alisson, Van Dijk and Alexander-Arnold all on board until at least 2025.

Energetic, passionate and a fan favourite, Robertson will now add considerably to his tally of 177 games and 37 assists to date for the Reds, which could be added to as soon as Saturday against Chelsea.

Contract extensions for Jordan Henderson and Mohamed Salah are also in the pipeline as Liverpool look to retain their key names for the foreseeable future.