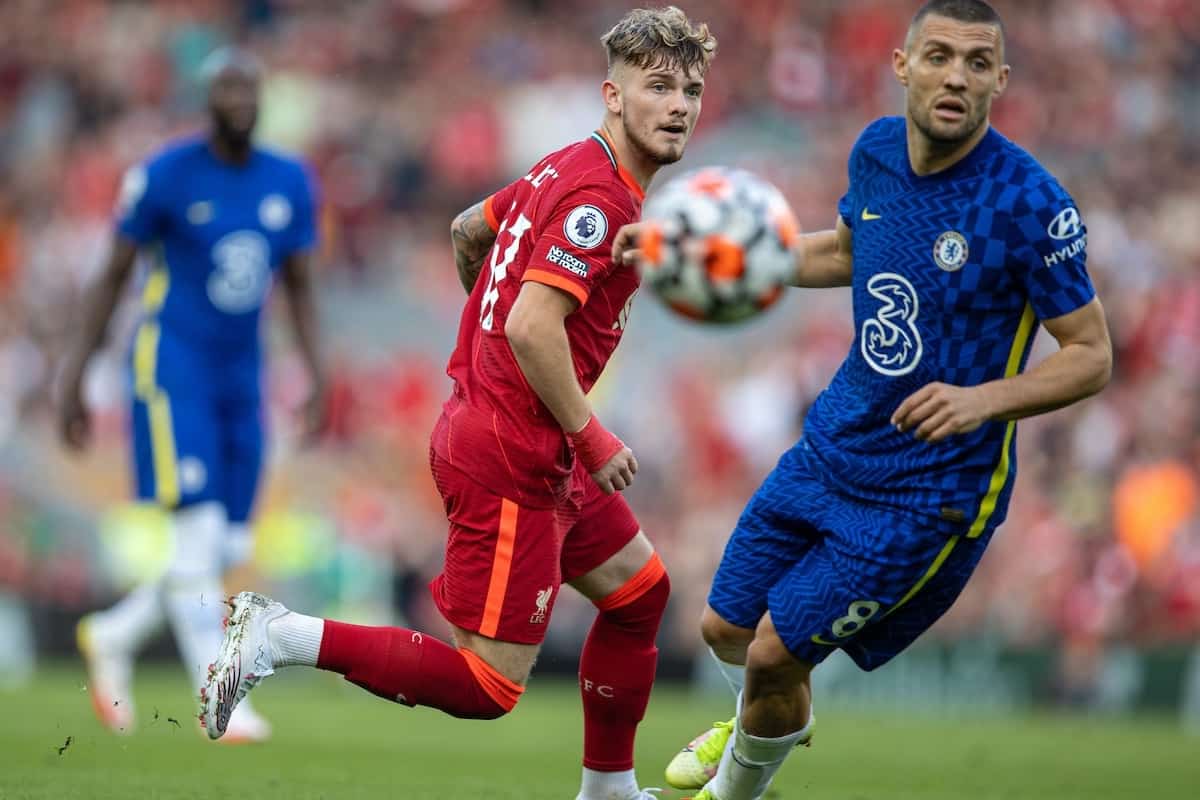 Liverpool were left frustrated by a 10-man Chelsea, failing to find the all-important winner to ensure it was a share of the spoils in a 1-1 draw at Anfield.

It was straight back to Anfield for Liverpool on what was the final game before the international break, with Chelsea the visitors to pit two undefeated teams against one another.

And it would remain that way come full time, with neither team able to find the decisive goal that would seal all three points.

They initially went in the favour of Chelsea with Kai Havertz’s glancing header, only for chaos in the box at the cusp of half-time to see Mohamed Salah level the scores from the spot.

Reece James had been given his marching orders and it ensured the visitors had to play the second half with 10-men, but the Reds could not find a way to goal in a frustrating 45 minutes.

Felt like 2 points dropped with frustration over a blunt attack…

Generally poor Liverpool performance. Didn’t shift in rhythm fast enough to take apart a 10-man side who were quickly parking. That point will feel like a bitter one. Elliott again very distinguished. #LFCdigest

That was a defensive masterclass by them. They blunted everything we gave. Bit worrying how ineffective we were in the final third.

Full time 1-1. #LFC getting a point that feels like two dropped in the circumstances, #CFC with the one they played for with 10 men. Would have maybe brought Tsimikas on earlier myself, and Thiago – meanwhile Elliott is growing into some player for the Reds.

Obviously removing Firmino earlier than planned changed it, but – even allowing for how well-coached Chelsea are – you do wonder if that's the sort of scenario that kind of proves Liverpool could do with one more high-calibre attacking option.

Lots of second half pressure but the 10 men created the best two opportunities. Frustrating for Liverpool, superb up until the final third where they then ran out of ideas. Credit to Tuchel’s setup but it was barely tested. #LIVCHE

Would’ve been relatively happy with a point before the game, but feels like 2 points dropped now. Chance not taken.

Chelsea were due their plaudits though…

Disappointing not to win with the extra man, but rule number one is don't lose to your title rivals.

Chelsea outstanding with 10 men and fully deserving of a point. Liverpool will improve as they get more sharpness.

Probably won’t play a team that good defensively until they turn up next. Sometimes you’re allowed to just say ‘good them’.

Chelsea are some team though. Kante and Jorgjnho outstanding

“Grudgingly admit that was a 45min masterclass in defending with 10.”

But Elliott remained a standout…

Harvey is running his nuts off here

Elliott's stamina levels are good. He's still more energetic than most of players. Been very good.

Harvey Elliott has the work rate, tenacity and attitude of James Milner with the skill and vision of Coutinho. What a player.

Holding his own, looks so comfortable in a game of this size. Neat, tidy, confident, composed and they was he interchanges positions with Salah could cause serious damage in time down that right hand side.

He didn't take the game by the scruff of the neck, but Elliott didn't look out of place against the European champions. I'd play Thiago next, but he was decent

On way home from Anfield. All a bit frustrating in the end – Liverpool too slow & predictable. On the bright side, another excellent display by Harvey Elliott. He’s got it, no doubt, and as I said last week, that right-side partnership with Mo Salah has potential to be deadly.

And there were also words for Liverpool’s defence…

Alot of talk all week how Virgil Van Dijk would cope and perhaps struggle with Lukaku. Well that was put to bed anyways.

A bit disappointed not to win with the extra man but my priority beforehand was not to lose. I didn't think we were great today, particularly in midfield and plenty for Klopp to work on. Matip, VVD and Jota were good tho #lfc

Trent Alexander-Arnold is the absolute business.

The idea that van Dijk isn't still the best in the business is laughable. That's all. pic.twitter.com/Somr2CrlEw