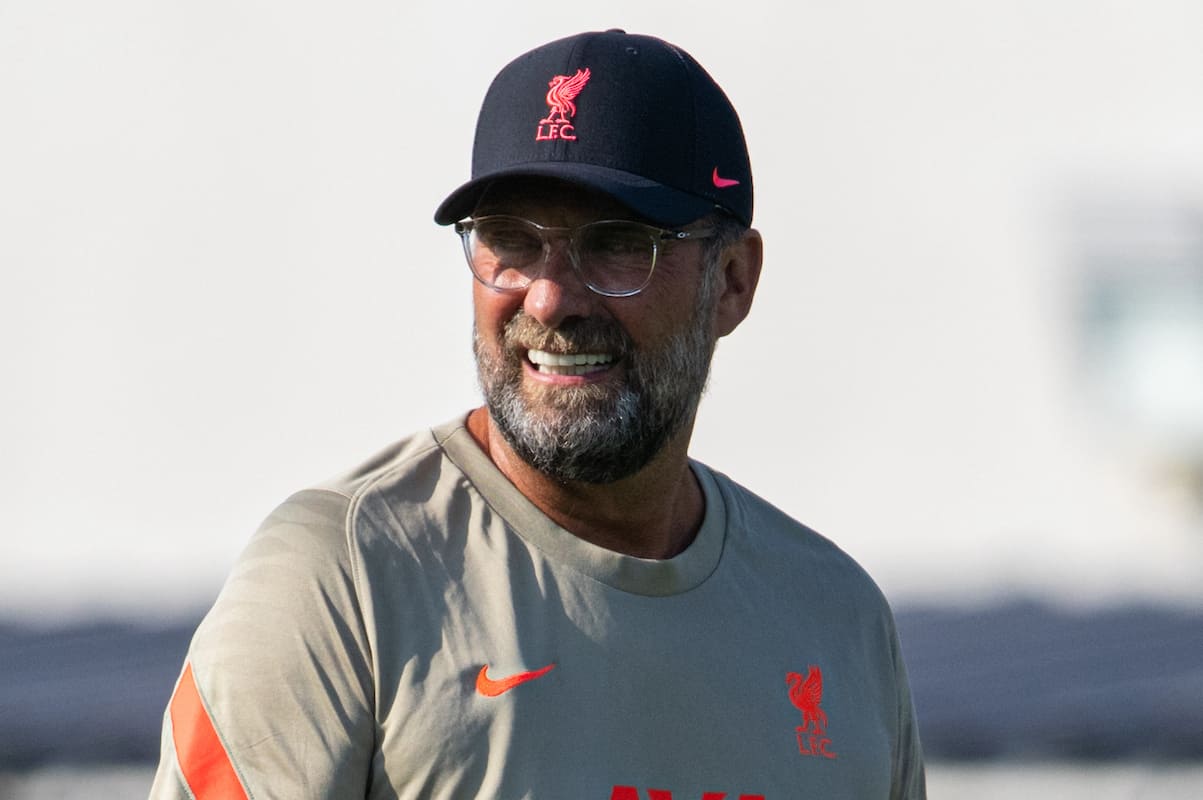 Liverpool‘s season opener at Norwich is fast approaching and with the squad growing stronger by the day, Jurgen Klopp could yet avoid a selection headache.

The Reds start the new campaign at Carrow Road on August 14, off the back of an eight-game pre-season schedule that will have taken in the sights of Austria, France and Anfield.

Those who took part in international tournaments have slowly been reintegrated back into the squad, with only Jordan Henderson left to return following the arrival of Alisson, Fabinho and Roberto Firmino over the weekend.

The delayed return led to concerns over how Liverpool would be able to lineup against Norwich with the need to get back up to speed in training.

But while the condensed preparation time is not ideal for Klopp and co., they still have four pre-season friendlies to contest to assist in seeing their sharpness return.

“You never have enough time to train and stuff like this – a week, two weeks before the season,” Klopp explained to LiverpoolFC.com.

“So the Brazilians now, two weeks. I think last year it was 10 days, if I’m 100 percent right, for the first game.

“The good thing is in three weeks’ holiday you don’t lose a lot. They don’t have three weeks’ no training – I say that every year as well.”

There is, therefore, precedence to throw the trio into the mix on opening day, with Alisson the most likely to get a starting berth between the sticks, but Fabinho and Firmino will need to show a level of fitness to rival those who have enjoyed a full pre-season.

With Klopp acknowledging “we can use them pretty quickly in the games,” they could get their first taste of action on Thursday against Bologna in one of the two games, where Virgil van Dijk and Joe Gomez are also expected to get more valuable minutes.

“But after 10 days, they start already with training again, just not football with us. So, they are fit, they don’t lose a lot and we can use them pretty quickly in the games,” Klopp continued.

“That’s why we planned it like this. Maybe on Thursday in our two 60-minute games against Bologna we can involve them already, I don’t know yet – maybe 15, 20, 30 minutes. We have to see how they look exactly.

“Then we come home and obviously we still plan football games, so we have the two games at Anfield.

“There’s one team who plays that game and it’s maybe more likely, I don’t know yet, for the weekend later and the other team who came a little bit later then they will play the second game – so everybody has 90 minutes in their legs.

“Then we play the first game against Norwich, then we probably have again a pre-season training game on Sunday at Kirkby or wherever, just to try to give them all a chance to get some rhythm. That’s how it is.”

Each of the friendlies will represent a chance to get as close to Klopp’s strongest XI as possible for August 14, with late-comers Thiago, Fabinho and Firmino needing to prove their availability in that time to ensure Liverpool are not missing three regular starters from last season.

Jordan Henderson, however, is not expected to return until much later in the week and will likely only be ready for a place on the bench at Norwich.